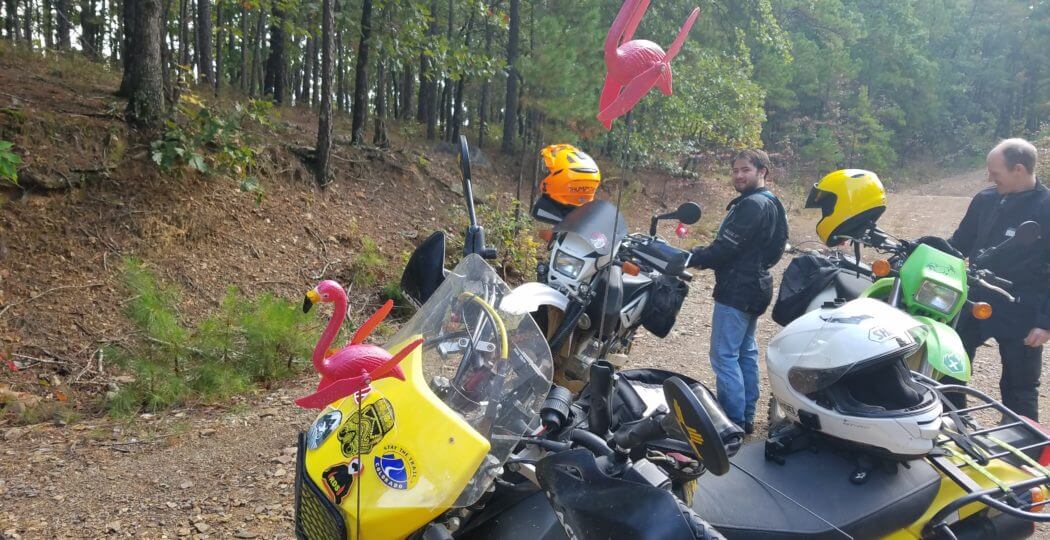 The house was quiet at midnight; dad was out like a light, hammered from spending the day hammering through the Ouachita mountains with Zach, Fletch and Tim. If you don’t remember Tim, he is the scruffy half of the Matthew Mcgonehey/Jane Seymour dopplegangers that we ran into out in Moab. Although we usually prefer solitary riding, sometimes there is something very comforting in having a cloud of dust marking the trail before you, as well as another behind you as an insurance policy should anything go pear shaped.

On a side note: we happened upon a bundle of pink flamingo whirligigs that someone had inexplicably left on the side of a remote trail. As odd as that may be, it somehow seemed appropriate to attach them to the bikes in a tribute to Darling Nikki, who is fighting a fierce battle with cancer; I think it would have done her heart good to see four enduro motorcycles bouncing through the woods, seemingly powered by the flailing power of plastic pink flamingos.

I know it did mine.

Anyway, I took dad’s fatigue as an opportunity to go poking through some of his notes, and found the following quote attributed to Marianne Williamson; I have no idea as to the context, but the quote is powerful enough to stand on its own.

“Our deepest fear is not that we are inadequate. Our deepest fear is that we are powerful beyond measure. It is our light, not our darkness, that frightens us most. We ask ourselves, ‘Who am I to be brilliant, gorgeous, talented, and famous?’ Actually, who are you not to be? You are a child of God. Your playing small does not serve the world. There is nothing enlightened about shrinking so that people won’t feel insecure around you”

We are all meant to shine, as children do. We were born to make manifest the glory of God that is within us. It’s not just in some of us; it’s in everyone. And as we let our own light shine, we unconsciously give other people permission to do the same. As we are liberated from our own fear, our presence automatically liberates others”

And there you have it; the reason we avoid fear and negativity like the bubonic plague is not because of how they cripple our own progress, but how they hinder us from enabling the progress of others.

Now go forth and Chark Diem!