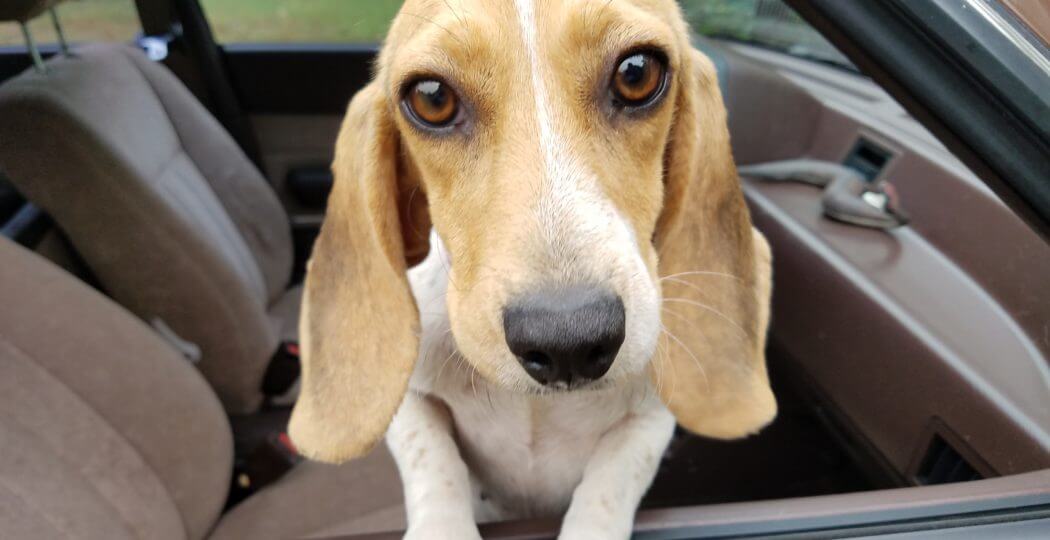 The shelter from whenst I came named me “Lola”, an unfortunate moniker; of the only two Lolas of which I’m aware,both were featured in song. One was a showgirl and the other had gender identification issues. Why didn’t they(the shelter, not the Lolas) just complete the travesty and engrave “Caetlyn” on my rabies tag? I’m sure that Zach and Tara will remedy the situation posthaste; stay tuned.

Zach took me over to the Casa del Whackos to meet the rest of the inmates, talk about sensory overload! I don’t know if anyone has ever considered hooking up a pack of unfamiliar dogs to a generator, as if properly harnessed, the circular “getting to know you” butt sniffing session could be used to power a small city. And do you have problems getting your dog to take a pill? You can forget the whole wrapping it in cheese nonsense; just tape it underneath another dog’s tail and voila, problem solved!

I’m a basset mix of some sort, my magnificent ears dipping down to the ground to funnel all of those delectable smells directly into my twitching snout, but my most prominent feature is my eyes; none can withstand their hypnotic effect. Within minutes I pulled a double whammy on my dad and dad’s dad and convinced them to load of the brown car and take a ride down to the creek.

Charlie had no issues with my hogging the front seat, but Max was NOT pleased to be giving up his spot on Zach’s lap, and an epic but invisible battle of the wills ensued. My ears served to ward off the lightning bolts that Max was transmitting from his eyelashes, but eventually I had to relent and relocate to a cushion in the back of the car; not because of Max, but because Charlie had changed her mind concerning seating arrangements. Once that girl starts oozing like hairy black ectoplasm towards her desired destination, there is absolutely no stopping her.

Although the Casa is obviously a constant party, I was ready to go home and establish my own domain. My humans appear to be imminently trainable, but I must start quickly before they develop any bad habits.