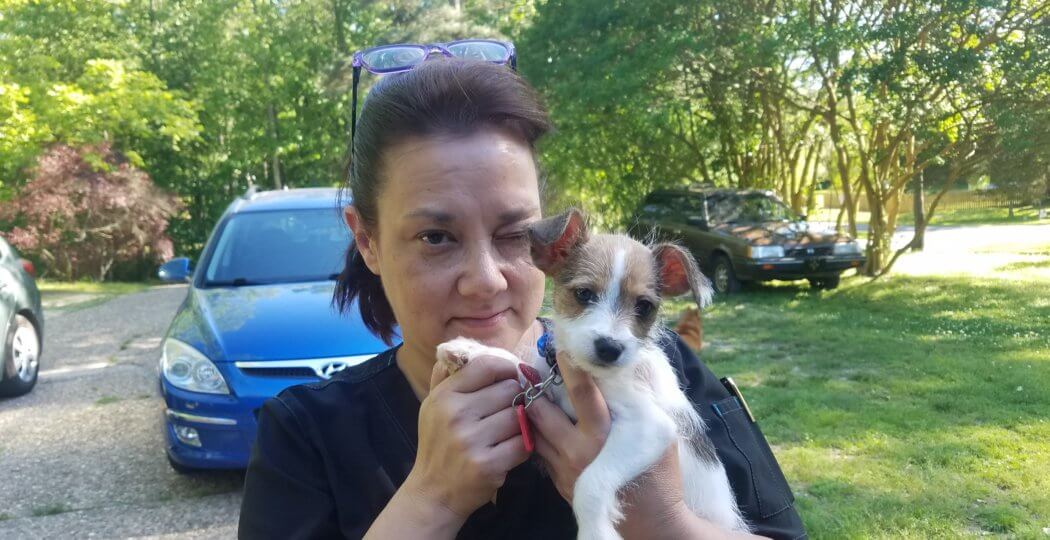 I don’t think that dad gets that the purpose of an exorcism is to cast the demon out, not invite him in, but here we are.

He made the mistake of going by the Pulaski County Humane Society last night, you know, just to check things out. There was a quartet of rowdy pups that used their superior intellects to bamboozle dad; one in particular must have had formal acting training as he appeared somewhat more sedate than the other three.

I’m believe I’m beginning to see the the formation of a conspiracy; remember Rusty’s Treats, the sweet potato dog treats that Max and Bull were so fond of? Well, Ms Jody had sent a memorial that just happened to be burning a hole in dad’s pocket, an amount that exactly covered the little thespian’s adoption fee, so what was he supposed to do? Willpower has never been one of dad’s strong characteristics.

On the way home, peace and quiet was the rule of the day, with the tiny canine wedged behind dad’s head as he drove to the Casa. What a sweet little dog, right? WRONG! As soon as they got home, an immediate transformation occured; dad didn’t just open the car door…

He unleashed the kraken.

Confucius says “when another woman enters the front door, peace flies out the back”; this is also true of scruffy little wads of rampaging puppy flesh; does this dog EVER just chill out? The closest we have come to a name so far is Taz, as in Tasmanian Devil; another option is Pilot, as he tends to pilot here and pilot there around the faux hardwood floors of the Casa.

All I know is the I, Charlemagne Bravisimo, hereby decree that the bed is a place to sleep, not a porta potty; the little spaz has only been here one night and has already annointed the bedsheets twice. His razor sharp teeth and toenails, coupled with his willingness to use them, have already been employed in the destruction of dad’s wardrobe at the Battle of Dockers Hill, and future skirmishes are no doubt on the horizon.

Mom always had a thing for the bad boys and thinks this one is a cutie as well, but he’s not fooling us; dad and I see right through to the evil that resides in this imp’s devilish little heart.

It’s going to take a bit more than a few sprinkles of Holy Water to calm this beast!