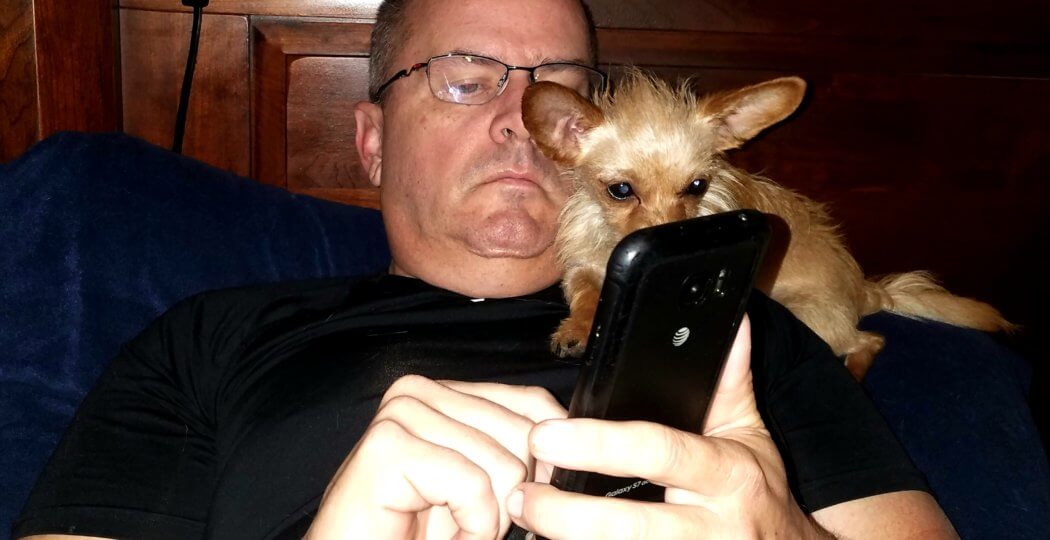 Dad here; I just saw a post this morning that posed the question: “what would you do if you woke up this morning with a billion dollars?” That’s an easy one for me: I wouldn’t have time to even consider the change in my bank account or the endless tax liabilities it would produce.

My new uber-rich status wouldn’t matter a whit to Ajax, as the instant my breathing changed as I emerged from REM, he would pounce on my chest, which would in turn ignite Claire Bear to begin lathering my face. Marco would emerge from from deep with his lair in the Cavern under the Covers to inject his own peculiar breath aroma directly into my nostrils via his probing tongue. I’m not saying his breath is “bad”, just “different”; if we ever decided to bottle it and market it as perfume, I would call it Eau de Day Old Fish.

This is about the time that the alarm clock would go off; yours may be a buzzer or a trilling tone of some sort, but this is mine, albeit muffled by a pillow that I placed there as a sort of an organic snooze button:

“Dad, let those dogs out before they decide to go wandering around and peeing on everything!”

So off I would go, like the Pied Piper of the Casa, my grumbled retorts directed toeard mom thankfully drowned out by the caucophony of clicking toenails following me as I trudge down the hallway like a death row inmate walking the Green Mile.

So far, my new billionaire status hasn’t seemed to made much difference, as I haven’t had a chance to hire a retinue of butlers to let the dogs back in at varying intervals that only they can determine. Then Charlie would be the first to arrive back on the scene, only to plant her elbows on my shoulders and begin waterboarding me with her tongue; again, there are no maidservants in attendance to come to my rescue, or at least be standing by with fluffy monogrammed towels to swab the copious amounts of Charlie slobber from my face so I can begin breathing again without inhaling enough canine saliva into my lungs to induce some new strain of canone pneumonia.

Then my overactive taskmaster of a conscience would force me to rise, forced by the prodding of his needle-like tines of his tiny pitchfork, to go check on the hairy mass of collie that seems to have set up housekeeping on the front porch of the Casa; all good there, exactly where he was yesterday, his prescence ensuring that the gold finches, robins, and indigo buntings are denied access to the birdie breakfast buffet.

The squirrels are NOT pleased either, and are chattering high in the branches of the big oak tree; it’s unclear whether they are planning a mass attack or simply forming a union to file a formal grievance against me, as I am not providing adequate access to sunflower seeds in the hanging feeders. Their hairy tailed union stewards care not a whit that the bag was clearly marked “bird feed”, and now I will no doubt soon find myself sitting across the table like a midget Mark Zuckerburg being interrogated by a bunch of pompous, pontificating windbags.

So now I’m not even fifteen minutes into my newfound billionaire status, and I have yet to see any benefit whatsoever, so I’ll just dream and keep on being the way I am. You can donate my share to some other poor guy and I’ll just continue to lay on the couch covered by a mass of claustrophobia-inducing dogflesh, watching the story unfold on PBS of how his life is now ruined by his newfound wealth.

Besides, if dogs were dollars, I’m rich beyond measure already; why would I want to take a step DOWN the social ladder?

Warren Buffet himself never had it so good!