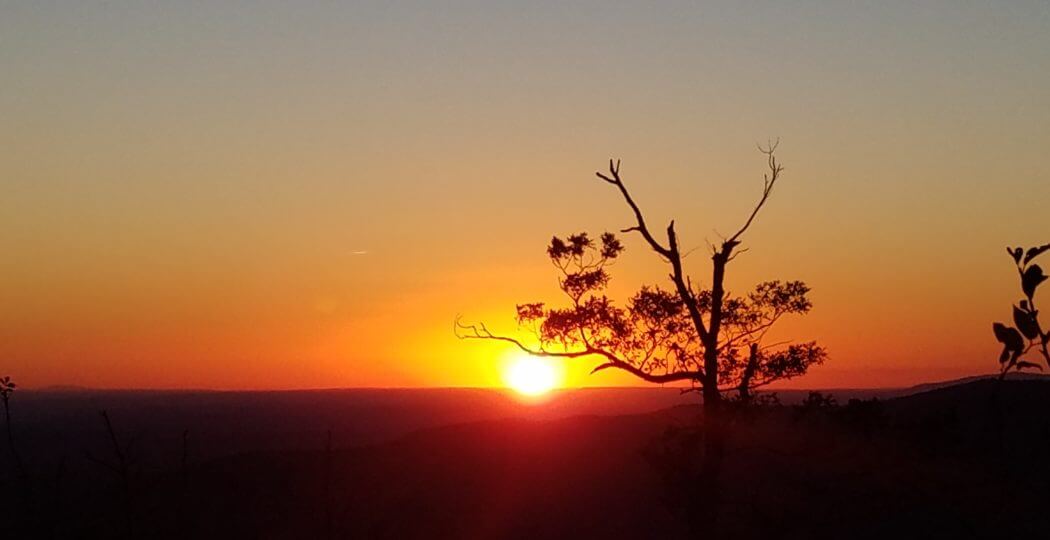 Last Saturday, Miss Ellie took dad and I waaaaay up into the Ozarks to an ADV motorcycle rally; I’m pretty sure that this was the first time that dad went to a motorcycle event in a 31 year old car with a rowdy dog in attendance, but such is the powers of guilt that I wield.

We decided to test Miss Ellie’s 4WD capabilities by camping atop Pilot Knob, the site of an old firetower, but quickly decided that the old girl is better suited for cruising old back roads than scrambling up steep rock ledges. So instead we set up camp at the base of the climb, still high enough to witness an incredible sunset, though not as high as we had initially wanted.

The sun filtering through the leaves turned them a brilliant shade of gold that could rival the aspens of Colorado, and the pink and purple skies were reminiscent of New Mexico; although nothing can compare to a Taos sunset, this one was close. I love the Natural State, but there’s something altogether different about the Land of Enchantment.

I had initially planned to do some writing, but dad broke out the sleeping bag and I decided instead to lay claim to my particular sleeping spot, which is wherever I decide it is at any given moment. Although the back of the Subaru was comfy, sleep was long in coming as the gears in my brain were still grinding, so I decided to recreate my story, pre-crate even, to the tune of “Bohemian Rhapsody”; why you ask?

Because I am the real Queen! Think about it; we both have great voices and love to delight the masses by cavorting around on stage. Freddie Mercury was limited to playing stadiums and arenas, but all the world is mine!

A basket of ten pups
Quite a large family
The runt of the litter
My childhood a calamity
My mom I surmise
Didn’t care that much for me…
I’m just a poor pup
At the base of the hierarchy
it was easy come, easy go
Siblings adopted out, to fates unknown
One by one they vanished, leaving just one waiting;
Just me…

Abandoned , on a county road
they hear my howls as they depart
It’s obvious they have no heart
But it’s too late, the car is gone
The only thing that’s been thrown away is me
Abandoned, oooo-oh oooo
I don’t want to starve
But If they’re not back again this time tomorrow
I’ll carry on, carry on
Because I know I matter.

How much time passed, I’ll never know
Standing hunched breaking my back
Ankle deep in my own crap
Oh how I raged, the crate kept me caged
I still refuse to stop and face the truth
Mama, ooo-oh-ooo
Though I refuse to die
I sometimes wish I’d  never been born at all

(All guitars: crescen… er, vibrato… eh, whatever; crank the amps to 11 and twist the knobs off…)

So they thought they could desert and leave me to die?
Do they now see that I don’t just live but thrive?
Oh, lady, can’t do this to a lady
Just had to get free, no crate’s stopping me
I’m Charlie.