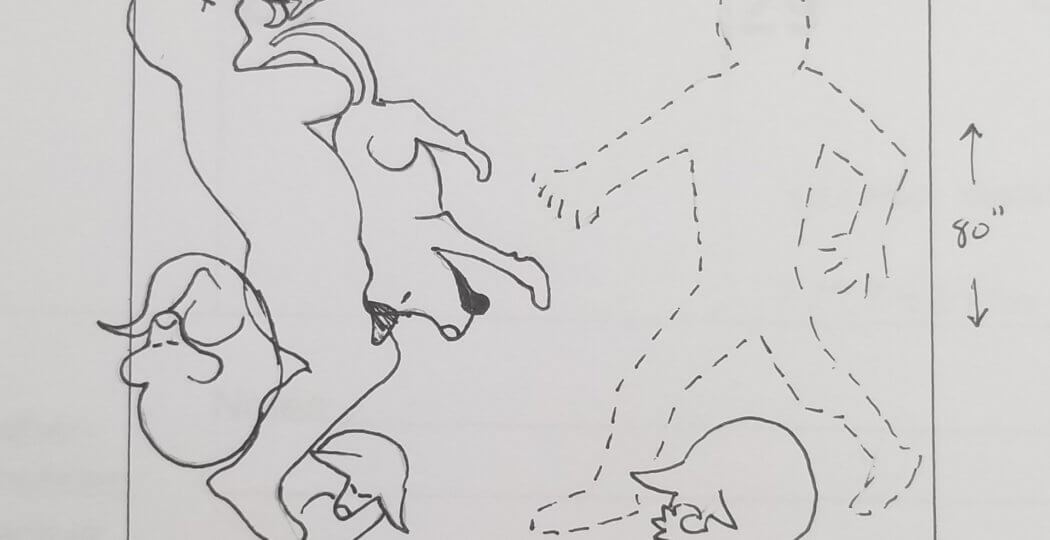 The suspension sighed in relief as the detective heaved his considerable bulk from the interior of the plain white Impala. He approached the modest ranch style house, and grunted his thanks as the uniformed police officer lifted the yellow crime scene tape; stooping was not something that got any easier as mandatory retirement approached.

“It’s a bad one, Bill; come on back to the master bedroom, but I’m warning you, it ain’t pretty”.

As they entered the room, Bill saw that the kingsize bed was covered with chalk-outlines, but, other than the recently disturbed mass of dog hair, there appeared to be no sign of trauma.

“Well, Bill, the victim is a white middle-aged male that previously identified as as teenager in an effort to stave off his approaching decrepitude. We think the cause of death was a combination of asphyxiation and acute claustrophobia; the poor guy didnt stand a chance against so many determined assailants”.

“So what’s with the dotted outline on the undisturbed east side of the bed? And judging by the size, I’m thinking that this one was a female”.

“It appears that she had the good sense to get herself out of harm’s way, as she had already vacated the premises when we arrived at the crime scene, and is currently in the kitchen, hogging all of the coffee. We don’t view her as a suspect, although she is remarkably cold hearted and remorseless”.

“And what about the other perps? Are they talking?”

“Talking? I can’t get them to shut up; the mouthy black one keeps going on about claiming diplomatic immunity due to her royalty status, and the other keeps insisting that she has white privilege. They’re both pointing the paw at the little Mexican, and the red girl from Finland has declared her neutrality. I’m thinking the instigator of this mayhem is the tubby little Scotsman; something about those eyebrows just looks a biiiit too shifty to me.”

“Well, what are we going to charge them with?”

“That’s where it gets a bit sticky, Bill; you see, the victim is not technically “expired”. Sure, all of his vitals are fully operational, but he appears to be brain dead, possibly from lack of oxygen; he’s shuffling around here somewhere, mumbling something about trying to sleep while being involved in a game of Hairy Tetris.”

“Well, cut ’em loose then, even though I have a feeling that we”ll be crossing paths in the near future; a gang of miscreants like these won’t be able to keep their noses clean for long…”

“What about the victim? Poor guy looks like he’s been through hell and back”.

“Lou, I see no better hope for him than right here, the Casa del Whackos; this place was obviously set up to care for the truly hopeless cases, and he’s as hopeless as I’ve seen. At least it appears that he knows his way from the bedroom to the kitchen, the bathroom and back; I say we close this case and start the weekend early; after all it IS Charlie Bravo Day!

“Uh, Bill, have you been fraternizing with the suspects? Accepting any bribes from the royal treasury, so to speak?”

“I plead the fifth…”