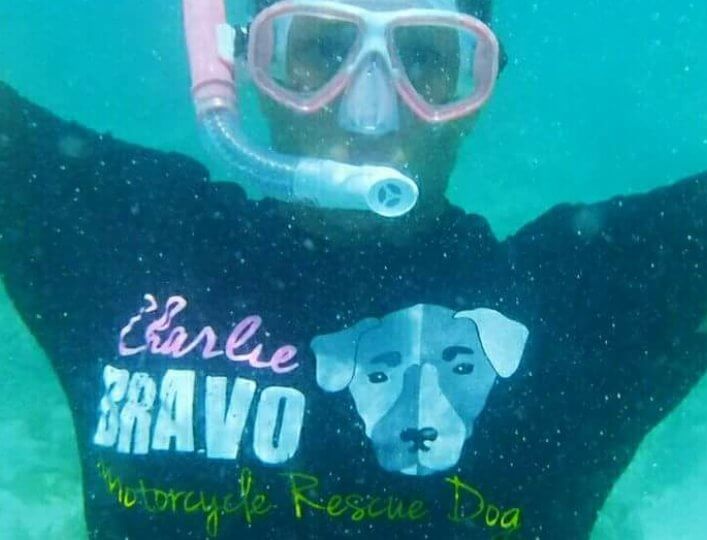 Shhh… Dad doesn’t know it, but Jody is going to smuggle me along on her next Carribean vacation. Actually, even Jody doesn’t know it yet either, but I have a way of usually getting what I want, either by stealth, guilt, or, if need be, brute force.

Who is Jody, you ask? She is the lady in the picture sporting my shirt in the above picture during a snorkeling trip. Jody is also one of the most ardent and earliest followers of this page, and a true free spirit. I actually think that she and dad may be related somehow, as they both ride the same type of bike and have the same slightly twisted outlook on life;

they can never bury you if you won’t get in the box.

In the beginning of my reign as the Queen of the Casa del Whackos, I intended for this page to be an escape from both the non stop barrage of negative news on the media and the sometimes cloyingly sweet responses. What I did not expect was the sense of family that quickly became evident, first in the comments, but more importantly, in the PM’s and emails, some received during some dark hours for both the sender and the sendee.

This let me know that maybe this was more than just an escape, but a mission, maybe even a ministry; but as in the case of dad and I, who is saving who? Each of you are the lifeblood that keeps my story alive.

I haven’t checked the weather for the coming weekend; I don’t even know what it’s going to do today, so I have no idea if dad and I will take the bike or stay inside and veg. What I do know is that, especially as a dog, life is too short and the future not garaunteed not to enjoy every day, but especially Charlie Bravo Day, which, as if you needed reminding, is today.

Go forth and Chark Diem!