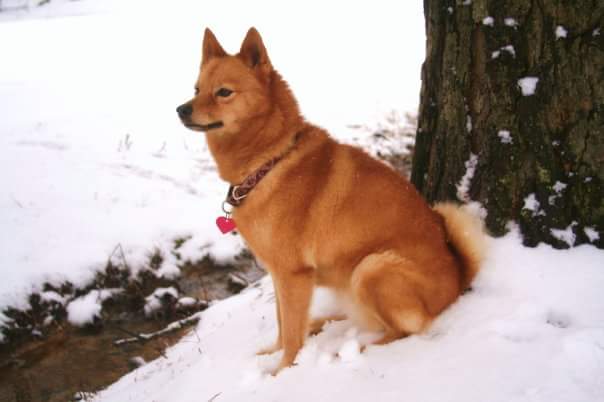 Dad here; Angel, the grand old lady of the inmates at the Casa del Whackos, passed over the bridge tonight.

I find it hard to describe myself as a “pet owner”; how do you “own” a living creature that controls such a large portion of your heart, albeit for a comparatively short span? I do like the title of “dad”, as a parent, not an owner, is what you become when you adopt.
Whatever the title, the tasks involved when you accept responsibility for another living being are sometimes daunting, and require us to put our own feelings on the back burner and consider what is in the best interest of all others, and sometimes we have to do the hard things.

Today was one of those days.

For the last thirteen years, Angel has been mom’s dog, and aptly named, as she could do no wrong. I have no doubt that, at least as far as mom was concerned, her very shadow(Angel’s, not mom’s) could heal any known disease. Angel was a Finnish Spitz, a notoriously mouthy breed, and she was mouthier than most; I honestly think that she would have argued with a stump. (What was that, mom? “She did argue with a stump; she argued with you!”)

As the years passed, Angel began to slow down, as we all do, and we’ve known for some time that soon that last trip would have to be made. But as any companion of an elderly dog understands, about the time that that you wrap your mind around the inevitable, the dog seems to have a miraculous turnaround, which in turn causes us to torture ourselves with guilt; why were we so hasty?

Then another turn for the worse, followed by a couple of good days, which is the reason for the title of this post: It always seems like it’s too soon until it’s too late. These words were said to us today by the vet that led Angel to the bridge, and a more peaceful transition I have never seen.

We brought Angel home and mom and I did the next hard thing, a middle aged couple burying her out back with Stevie, Max, and Bultaco while the other inmates cavorted in the rays of the setting sun filtering through the leaves of the pecan tree. While this may seem like disrespectful funeral service behaviour on the part of Charlie, Sandy, Ajax, and Mia, it was also somehow oddly appropriate, the circle of life and all that, and besides, this IS the Casa del Whackos; what else would you expect?

P.S. the vet we used today was the most perfect mix of professional and down home, caring without being cloying; if you’re in the Little Rock area, PM me for his contact info; we be of one blood, he and I