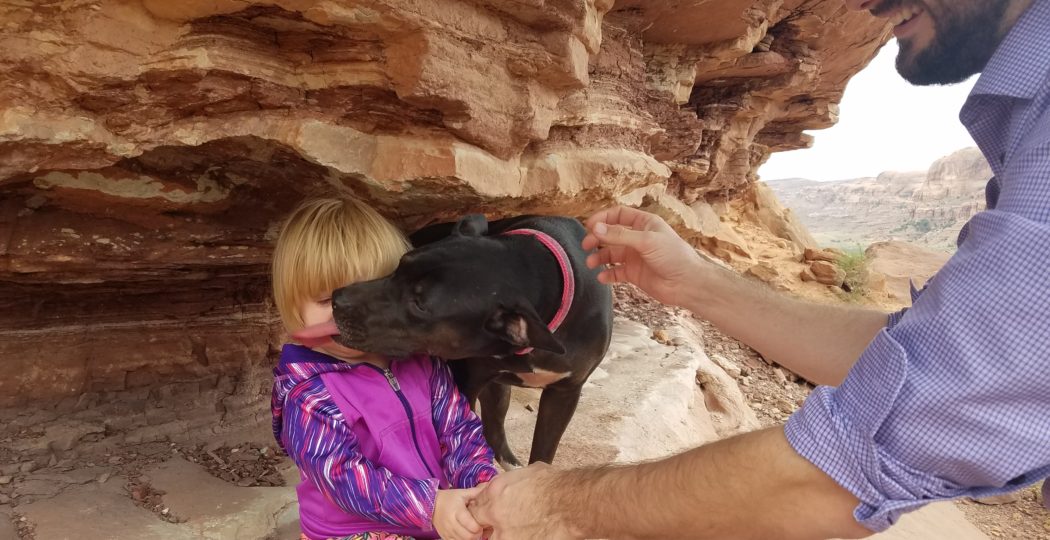 Dad here; the heat and friction of the sandstone in Moab took its toll on Charlie’s getupandgo, and today she’s moving around like an old woman. She is digging the attention that mom is lavishing upon her, but personally, I think that she’s being a bit overly dramatic. In her mind, she’s shuffling around Colorado with a quad cane and orthopedic slippers(Charlie, not mom).

On the other hand, Max has dropped his grumpy Winston Churchill persona and is totally in his element.

There are tradeoffs in everything; while the cloud cover kept the temperature in the sandstone desert to a bearable level, it also negatively affected the ability to frame Moab’s magnificent arches against Utah’s usually azure skies, and that same sky has dogged us back into Colorado. After such an auspicious beginning, it’s sometimes difficult to remember that journey’s are a mirror of life, some cycles being indescribably good being offset by periods that just don’t seem to “click”.

So what do you do? You have no choice, you keep rolling. If you do feel that you need to pause and reconsider your direction, that’s to be expected, but only with the intention of putting the vehicle back in drive as quickly as possible. A motorcycle/house/car/person left sitting idle tends to deteriorate at a much quicker pace than one that’s active, and the same is true of our dreams; keep driving.

It’s been a fantastic trip so far, as usual, with the people making the difference. Charlie’s diplomatic tongue can do more to further her message with one slimy swipe than she can do with a thousand posts. We have encountered people from around the world, Belgium, Holland, Germany, Japan, etc, that have heard Charlie’s story and decide to bend down for a pat, only to feel the wrath of an anteater-like tongue, if an anteater’s was also a foot wide and covered with gallons of slobber. Max is also incredibly effective in this area, but instead uses his radar like eyebrows and ears to transmit his own peculiar frequency.

And in an open note to Darling Nikki; keep driving. I know words seem empty at a time like this, but thoughts and prayers are not; your determination is an inspiration to the whole Las Familia de la Casa del Whackos. As in Charlie’s story, it’s easy for some to stand by and do nothing when they realize that they can’t fix everything, but all you have to do is speak the word and we will do what we can to ease your suffering, financially, spiritually, etc; “service every need as it arises and we will find our ministry”. They say that when you laugh, the world laughs with you, but when you cry, you cry alone; I assure you that in the case of the inmates at the Casa, this is not true.

Even though we’re all thousands, some even ten thousand miles apart, we all stand together; we be of one blood, ye and I.