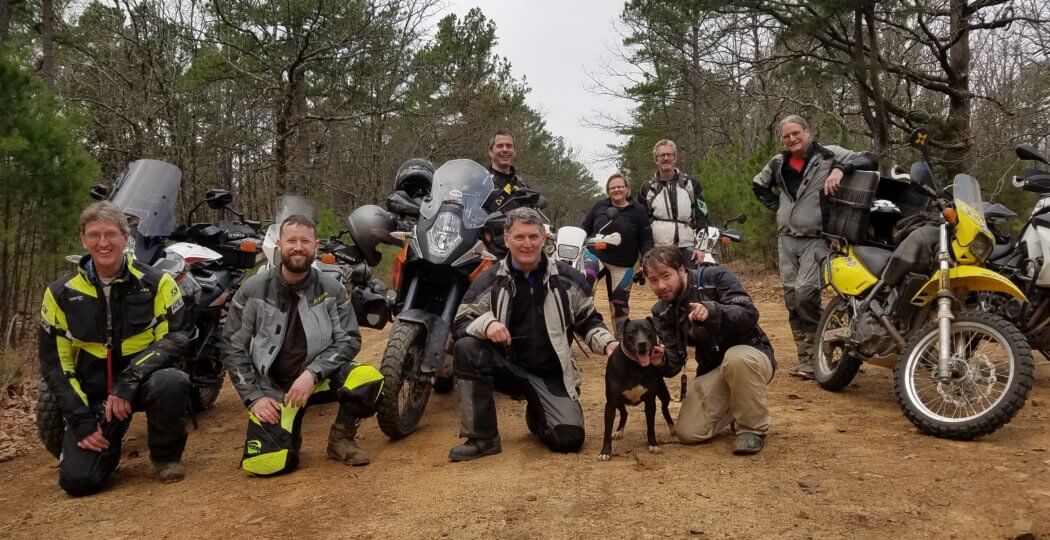 The next time you start to say “I can’t/shouldn’t (insert your activity here), repeat after me:

“What Would Peggy Do?”

Dad and I attended an ADV motorcycle campout this weekend; this is where a bunch of usually middle aged riders get together to ride off road in remote areas, but usually the main focus of the occasion is making good natured but snarky fun of each other’s choice of bikes. For those of you who view motorcycle riding as “sexy”, a visit to one of these spontaneous events will quickly banish any preconceptions involving leather, tassels, or any other Village People-related attire(unless you happen to be riding a KTM).

Dad, Zach and I rode over to Rich Mountain to set up camp; as we began twist our way up into the clouds, the fog became as thick as an Italian man with multiple wives. (Get it? A “bigamist”? I kill myself).

The humidity was so thick that the inside of the tent resembled a swamp before we could even get set up; in an effort to save space on the bike, dad had stupidly brought the smallest of his ground pads. This meant there was no room for him, as I think you know who commandeered any real estate not involving a damp sleeping atea.

The trip was intended to be sort of a shakedown cruise in preparation for a Colorado trip this summer. We were trying to determine just how little gear we could get by with, and also how many hours I could stay on the bike, as trips out west usually involves loooong stretches of saddle time. The plan was to let the main groups depart then go off on our own to dial things in.

That’s when we met Peggy.

Imagine if you will, a (respectfully) vertically-challenged lady, she and I the only two females camping in the midst of a sea of medically enhanced middle aged testosterone. Later in life, she had decided that she wanted to ride motorcycles, and had acquired a Yamaha XT225; bear in mind that this is less than a third of the size of most of the machines in attendance. Most people would say that she shouldn’t even try to keep up on such a ride, but Peggy is not most people.

We forwent our original plan in favor of riding with Ms.Peg, and quickly found that we weren’t tthe ones doing the waiting, but instead we were having to hustle to keep up.

The point here is that it’s not the size of the dog in the fight, but the size of the fight in the dog. At fifty years of age, Peg decided she wanted to ride, and with some assistance from those around her, she made it happen. Motorcycling may not be your calling, but whatever else moves you, it’s never too late to dive in head first.

After a brief stop to refuel both ourselves and the Suzuki, we split from the group and hightailed home to the Casa del Whackos. Approximately five hundred miles in two days on a 650 thumper with a dog on the back, you would think that I would have had enough, but I am the Charlimus, Queen of the Trail and the Open Road!

Dad is whupped; anybody else up for a ride?