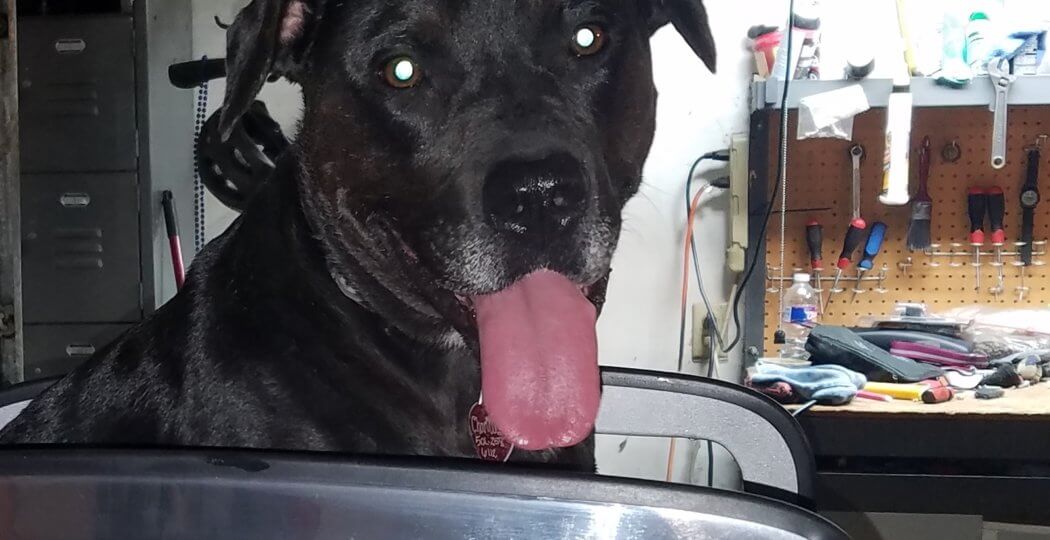 Surprise! I’m going to go ahead and post the Charlie Bravo Day post on Thursday night instead of Friday morning; a normal creature may view this a cheating, but I’m the Queen, and queens can’t cheat. We just change the rules.

Tomorrow is the both the end and the beginning of long journey that started when Zach and Dad found me in January 2014; two Honda CB motorcycles appearing out of the fog and rain. My life seems to be linked with bikes ever since; even when the sidecar saga abruptly ended with dad and the buyer careening off the road and into the brambles, the dream of riding with dad lived on.

So we started with the riding lawn mower, the howling, spitting, monster that I absolutely hated until I realized that I could jump up between dad’s feet and walk around the yard while lounging on the deck. It didn’t hurt matters a bit that the other dogs were consumed with envy, as I enacted by imperial decree that there was only one seat available on this flight, and all other boarding passes were being denied.

Then dad had the idea of using zip ties to attach the bottom of my former prison to the rack of his Suzuki, and we would putt around the back yard. This was like riding the mower, but infinitely better, as it accelerated, but more importantly…

That did it, a fascination with riding motorcycles was born; dad cut the top and front out of a dog carrier and again employed zip ties(zip ties play a LARGE role in life at the Casa del Whackos) to attach it to the bike. After a few trial runs arouund the neighbourhood, the plan was to try a short twenty miles or so. We quickly found ourselves over one hundred miles away, then had to ride the hundred back home.

After that, dad began searching for someone to fabricate a Charlie chariot, and found out that when it’s all said and done, a lot more gets said than actually gets done. Since he knows as much about welding as he does about keeping his opinions to himself, he instead turned to fabbing boxes out of PVC pipe, looking for all the world like a middle aged hobbit playing with Tinker Toys. But the boxes worked, actually carrying me all over northern New Mexico, southern Colorado, and into Utah; I fully realize that we looked like four-stroke vagabonds, but function over form, that’s us.

Then dad found the black Honda CB1100, and lo and behold, a mutual friend introduced dad to a welder with a vision, and many a late night later, the Charkstream is finished. She’s mounted up and ready to ride, but dad won’t think of until the last detail is in place:

Missy is taking care of that; she is mom’s coworker and does this type of work on the side, so tomorrow dad’s going to pick up the stickers and we’ll formally finish the project and take the Charkstream for a little spin. Until then, dad is holding the same hard line on pictures as he is riding until its finished, so you’ll have to settle for the teaser at the top of this post. Be sure and tune in Sunday for the ride review, and check my Instagram @charliebravomrd for pics. Until then;