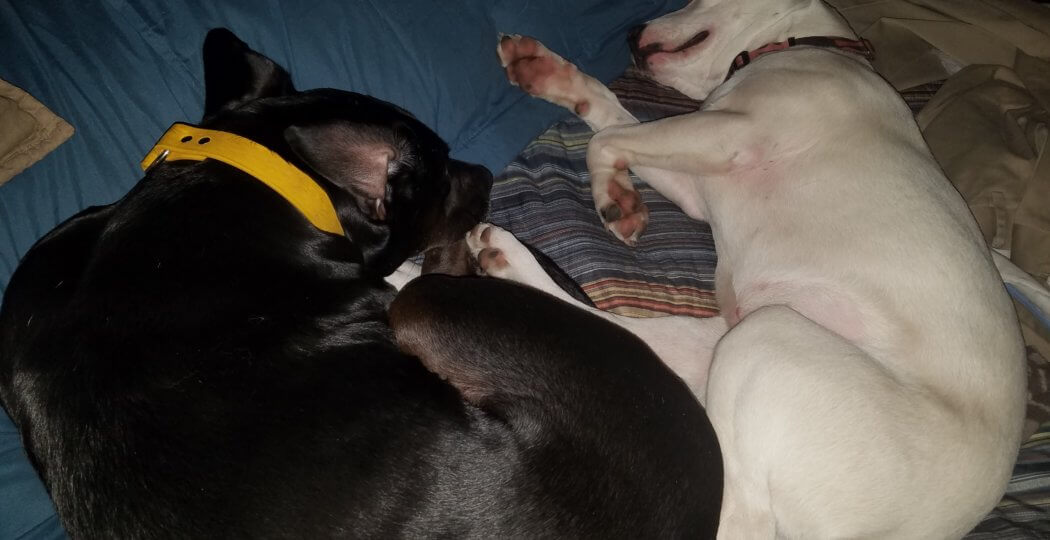 Before Claire comes back in; we need to talk.

Uh, Charles, I haven’t been married for thirty years without figuring out that hearing “we need to talk” actually means “you need to listen”, so I guess there’s no going back to sleep now. Say your piece.

Are you going to make an honest woman out of Claire Bear or what?

(Sitting straight up in bed) Don’t you think that that’s a bit personal and more than a little abrupt, Charlie? Besides, you’re the one that acted all hissy when we first brought her home.

I know, I know, but the girl kinda grows on you after a bit, and you have to admit, the resemblance to Stevie is uncanny.

Oh, I get it; we bring a dog home with the sole intent to rehabilitate, and now, all of a sudden, we’re supposed to keep her because YOU decide it’s the right thing to do?

Actually, dad, I think it has more to do with YOUR failures than anything else.

OK, now I’m sure that I’m arguing with a woman, as now I’ve allowed the discussion to become about MY shortcomings…

Interesting that you would put it that way, dad, being vertically-challenged and all, but I’ll let that softball pass. Have you ever heard of the Seven Deadly Sins?

Of course I have, but I also have a distinct feeling that it doesn’t matter, as you’re going to educate me anyway.

Envy, gluttony, greed, lust, pride, sloth, and wrath; I won’t say that all of them apply in this particular situation, but I will say that more do than don’t.

Oh, this is going to be rich; a dog that nibbles her butt in public is suddenly some sort of hairy psychiatrist; we should rename the “Freudian Slip” the “Charlian Scoot”, based on how you move across the carpet at times.

Now, dad, don’t get personal, that’s MY job. I have determined that the reason that Claire is still here is due to your problem with “sloth”, or we’ll just call it what it is in your case, procrastination; you’re in no hurry to see her go, so you keep putting it off. Then there’s the whole “pride” thing; you think that there is no one else on the planet who can show her a good time like you can.

Are you done? I have to get ready for work…

Not even close, as we need to discuss “envy”; she’s turned into such a good girl that you don’t want to see anyone else have her, and you also have a very difficult time drawing the line between “dog whisperer” and “dog hoarder”. I think that fits very nicely into both the “greed” and “gluttony” classifications. I’ll let you off of the hook on the topic of “lust”, as I can see that my pinpoint analysis of your failures as a foster parent causing you to have a problem with your “wrath” issues. Don’t blame the messenger, just heed the message…

Look, Charlie, I know when I’m being played like a cheap banjo. I also know that Ajax put you up to this, and that he and Claire have their substantial ears pressed up against the door to hear the outcome of my “session”. But what about The Three M’s, Marco, Mia And Mom?
Have they also been conspiring against me?

Nah, dad, they live in their own little world where they live under mom’s protection, protected by the dogma of canine infallibility; they’re so wrapped up in their drama that they’ll never even notice another dog roaming around the Casa del Whackos.

Ok, Charlie, here’s what we’ll do; as psychiatric care is not covered under my HMO, partial payment for such a breakthrough session as this shall be that we continue the status quo FOR THE TIME BEING. Now, get off me, I need to go jump in the shower, and I’m running late, as always.

(Pssst, Claire, Ajax; you can come in now. And I think we can add one to dad’s list of failures; PUSHOVER!)