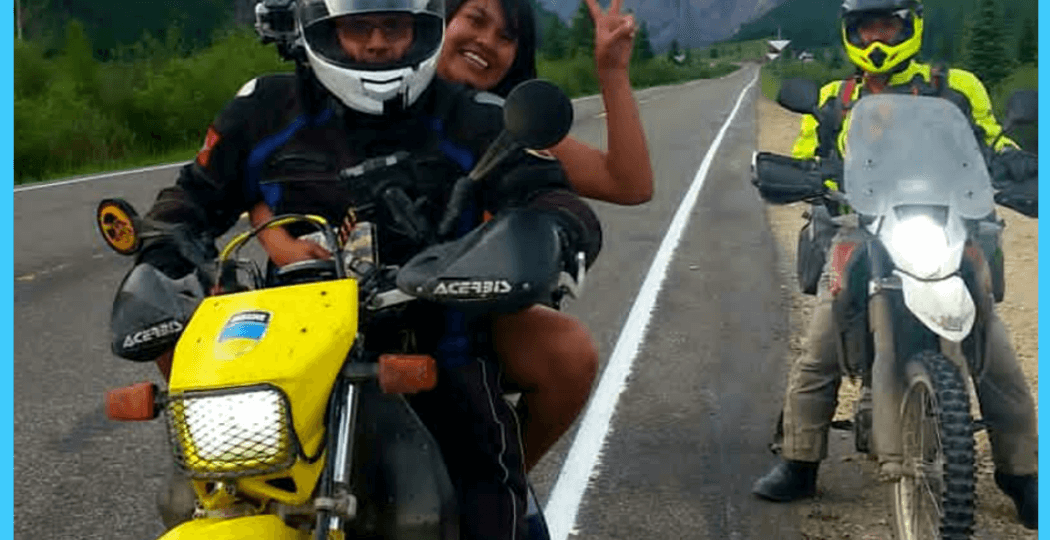 Dad here; 0500 at the Casa del Whackos and Charlie is taking full advantage of her name day,refusing to do her own post this morning. The rest of the dogs are outside flexing their plumbing, but actually soaking up more moisture on this dewy morning than they are depositing therein, moisture that I know is destined for the bed when they stampede back inside.

Since Charlie is obviously on some sort of strike or something, I’ll be filling in until she decides to join us; she’s the queen, she calls the shots. An old buddy of mine came by last night to pick up some tire changing gear, and he had all the signs of an incurable illness known as vocare ad plagam:

The call of the west.

He’s recently been through a bad divorce and if anyone needs a thourough soul cleansing, it’s this guy. As to his age, we guys like to subscribe to the whole “don’t ask, don’t care” policy, but like all of us, the clock is ticking and actually seems to be accelerating.

I told him to quit over thinking it and just GO!!! Young people have visions, old people have dreams, young travelers pick a destination, but the truly savvy pick a direction. Life on the road changes a person for the better, the farther you travel from the comfort of your safety net into the unknown, the more relaxed you become. Every revolution of the wheels and blast of hot desert air seems to peel another layer of stress from your hide until your soul is laid bare, and then, and only then, can you receive.

I used to think that people start to look at you different when you’re on the move, but now I wonder if it’s me who feels the change, not them. When you’re forced to strip life to the bare essentials, your whole world shrinks to what you can fit on your motorcycle, but then strangely expands to all the places it can take you.

But first you have to go.

Strange and wonderful things happen when you’re on the road, things that never happen close to home. Zach, Craig and I made such a trip last summer across the frigid Rocky Mountains into the burning wasteland of Moab, UT; I’ve taken Charlie to Utah on the motorcycle before, but the heat and sandstone take a distinct toll on the girl, so she elected to follow this trip from the comfort of the Casa.

About a week into the journey, we found ourselves on Hwy 550 in southwest Colorado. Though the entire stretch has been called the Million Dollar Highway, it is really the twelve miles south of Ouray through the Uncompahgre Gorge to the summit of Red Mountain Pass (11089′), which gains the highway its name. This stretch through the gorge is challenging and potentially hazardous to drive; it is characterized by steep cliffs, narrow lanes, and a lack of guardrails; the ascent of Red Mountain Pass is marked with a number of hairpin curves used to gain elevation, and again, narrow lanes for traffic—many cut directly into the sides of mountains. During this ascent, the remains of the Idarado Mine are visible. Travel north from Silverton to Ouray allows drivers to hug the inside of curves; travel south from Ouray to Silverton perches drivers on the vertiginous outside edge of the highway. Large RVs travel in both directions, which adds a degree of excitement (or danger) to people in cars.

Excitement in a car is ecstasy on a motorcycle, and ecstasy increases exponentially with the application of varying amounts of speed.
Snaking through the curves on a motorcycle is obviously more exhilarating than in a cage, but it’s also actually safer, as a car is limited by it’s width as to where inside it’s lane it can be to set up for the next turn. On yhe other hand, the motorcycle can utilize the whole lane, setting up wide in the curve as to be able to see further through the bend, then heel the bike over to strafe the apex, then the next, and the next; when everything is “clicking”, there’s nothing like it.

Zach, then Craig began the ascent, heading south out of Ouray towards Red Mountain Pass. This time I brought up the rear, as riding sag in a situation like this can be a wonderful experience; you get to pilot your own fighter, but you also get a front row seat to the histrionics of the riders in front of you. When you’re totally in sync with a pair of great riders, it’s like a high speed flamenco, and it doesn’t matter who’s leading, as everyone is grooving in unison.

As we attained the first pass and the road began to level out where we could relax for a few miles, a figure suddenly appeared from the side of the road, waving her arms and causing Zach to swerve to avoid an impact. She was 1/4 of a quartet of Navajo teenagers on their way home from a Rob Zombie concert when their rickety Impala decided to lay down and take a nap in the worse possible place, Hwy 550, without a prayer of cell coverage and cold nightfall coming on.

The only option was to give one of them a ride to the closest town, twelve mountainous miles back to Ouray, to call for assistance. Our bikes were all loaded down with our camping gear, but I was able to slide far enough forward on the saddle to allow the less-rubenesque of the girls to wedge herself between me and my gear. As I never carry passengers, I had long since removed my rear footpegs, so she was left to fend for herself as to where to place her skimpy little slippers.

Zach and Craig continued south towards camp, and we rolled north, looking for all the world like two nomads riding an overloaded yellow camel. She had never been on a bike before, and her enthusiasm was infectious, until she started feeling the need to scream right in my ear when we flew through the tunnels, just to hear the echoes. “Screaming” and “motorcycles” are two terms that don’t tend to co-exist so well , but overall, it was an absolute blast: extremely treacherous road, the sun setting behind the mountains, the scent of mountain sage filling my helmet, and a screaming helmetless Navajo in slippers on the back of a bike clearly designed to carry uno and no morro.

That just don’t happen back in Arkansas.

We arrived safely back in town, and the angel of Ouray (you know who you are, Trina) took control of the situation and I rolled hard for camp in an attempt to dodge the elk, mule deer and other fauna that likes to step, formally unannounced, directly into the path of unsuspecting midgets on howling yellow motorcycles. Halfway there, I saw the ratty Impala creeping down the switchbacks; it appeared that the Navajo kids had gotten their chariot started after all, so all would be well.

The moral of this story? There isn’t one, unless it’s that cool things can’t happen unless you’re willing to put yourself into situations that might seem, or actually be, foolhardy. Many bad and unpleasant things happened and were said on this particular trip, but I can’t remember any of them, just that they did happen. What I do remember was that shrieking firebell on my bike, having the time of her life, even though her car was broken down back somewhere in the mountains.

And that’s something I can keep… it doesn’t matter how much money you make, if your last shirt has pockets, take all you can take.