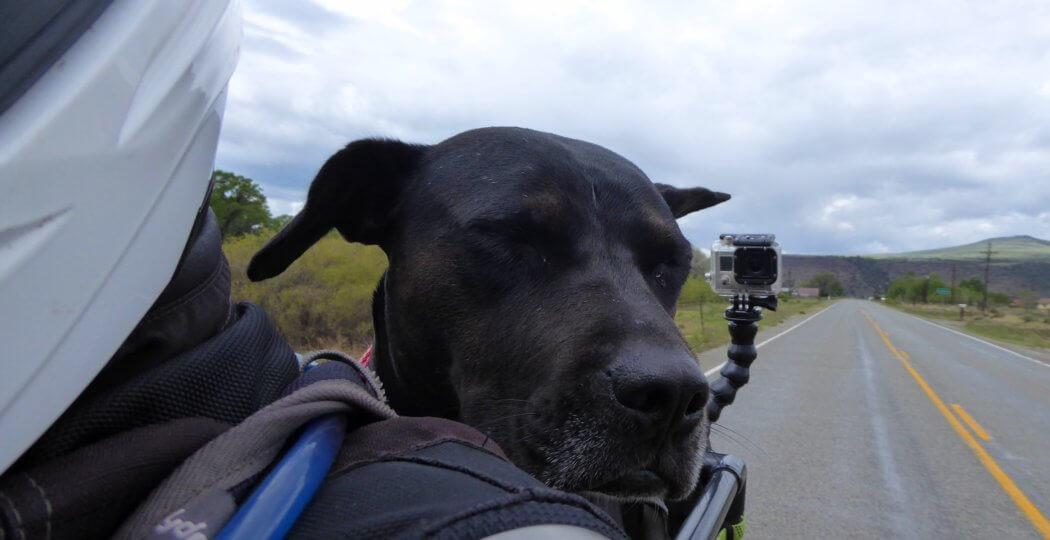 Warning: excessive motorcycle jargon ahead, proceed at your own risk.

Since Charlie and I returned from Colorado last month, it has been obvious that a change in bikes was needed. Our Suzuki DR650 enduro did fantastic, but is light, fairly tall, and has no forward protection from the elements. Charlie weighs 55#, and when you figure in all of our camping gear, that’s like having another person on the back of the bike for 2000 miles.

I did have another bike, my pride and joy, a sleek and sexy Honda Hornet with all the performance mods; I swore we would never part. But then Charlie started riding, and as it was impossible to mount her chariot to the Honda (Lord knows I tried), more often than not, I found my self grabbing the keys to the Suzuki. If you ever saw how Charlie responds when I fire up the old thumper, you wouldn’t wonder why; she doesn’t respond as much as actually loses her mind, prancing and flouncing in the most undignified manner from the first click of the key. Then, uninvited, it’s up on the bike and charking incessantly directly in my face as evidently I move WAAAAY too slow when donning my helmet and gloves.

I have found that I don’t really care to ride that much anymore if the goofy girl can’t go, so it was obvious a change needed to be made. I found a more suitable bike for Charlie approximately eight hours away; we agreed to a trade and to meet halfway in Jackson, TN. Even though I knew it was the right thing to do, the decision to actually do it almost made me physically sick; bikes like this particular Honda only come by once in a lifetime. My confirmation came when prepping the bike that morning to head towards Tennessee; Charlie came out into the garage, saw what bike I was taking, shook her head, and sulked back into the Casa. This is very unCharlie-like behaviour, especially where motorcycles are concerned.

I headed out shortly after sunrise, making one last pass on the Honda through the area where I found Charlie, Stevie, Beau, and many others less fortunate, this time finding nothing more depressing than pavement greasy with dew, then hit the interstate east towards Memphis.

BTW, I consider the Holy Grail of motorcycles a Norton Commando 850; Google it and you’ll see what I mean. I passed one being ferried in the back of a pick up(BLASPHEMY!), and almost ran the poor guy off the road with my shameless gawking; just seeing it raised my testosterone level 20 points.

Anyway, we met in Jackson, and I traded the 919 for a Honda NT700V, a bike all the magazines described as “very capable”; nice words if you’re describing a Camry, but not what I usually look for when choosing a bike. But she has shaft drive, a low center of gravity, excellent wind protection, and most importantly, a wide open area(read:porky butt)behind the cockpit for Charlie’s Chauler.

I won’t lie; for the first hundred miles or so, I was mentally and physically kicking myself in the head, no mean feet when riding down the interstate. Then as the memory of the waspish whine of the naked inline four began to fade to be replaced by the jocular chuckle of the V-twin, I began to realize that the miles were disappearing under my front wheel at an alarming rate, so alarming in fact, that I drew the attention of a certain unmarked car on the side of the road. Ultimately, he peeled off, probably feeling sorry for me; poor guy, riding the motorcycle equivalent of a minivan.

Hmmmm; maybe there are no boring bikes, just boring riders? And how boring can a bike be with a yowling black dog perched on the back seat, demanding to driven faster, leaned farther?

We aim to find out.