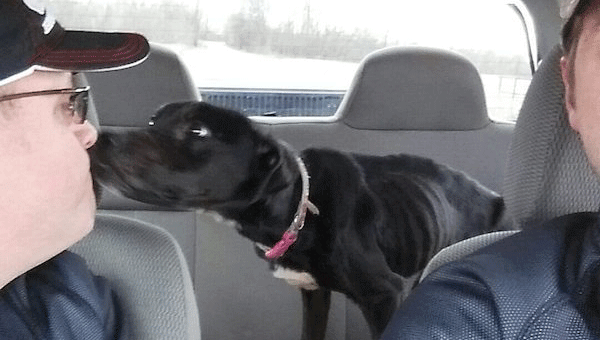 Dad here; the recent situation with the beautiful girl in Bastrop has brought back a flood of memories from the early days of Charlie. BTW, the gofundme goal was reached, and if I understand it correctly, her amputation is to be performed this morning. It did my heart good to look down through the list of the donators and see so many names I recognize from this page; I had no doubt the siblings would come to the rescue. I will keep everyone posted on the progress as I receive news from the south.

Anyway, when Zach and I found Charlie, a story was the furthest thing from our minds; all we were hoping for was survival. That was on a Saturday, and the next day we were on our way to church on one of those days where the temps are loitering around the freezing corner and the rain is trying desperately to prove it’s street cred by transforming into sleet. We were both thinking it, but Zach said it first: “you know that she would be dead right now if we hadn’t found her yesterday”.

I play bass in church, and during a song, my phone buzzed. It was a text from Hannah and Tania out in the congregation: “can we start a Facebook page for that dog?” I remember thinking “who does a FB page for a dog?”, but knowing that resistance is futile when it comes to Hannah and Tania, I shrugged my shoulders in resignation.

A week and half went by, with mom working tirelessly to bring Charlie back from the brink, concocting a gruel of high fat puppy chow, condensed milk, Dinovite, and an occasional raw egg in a blender. I tasted it myself; interesting flavor, could have used a pinch of cilantro(don’t tell mom).

When CB started to gain some strength, we scheduled a vet appointment at 1330 on a Thursday. As we walked in the door of Landmark Animal Hospital, the receptionist started crying when she saw Charlie’s condition; bear in mind that this was after a week of rehab, and she had already began to improve(Charlie, not the receptionist).

Dr Shaw came out and asked if she could let people know that we were there; I couldn’t imagine who would even be checking up on us. As it turned out, Hannah had posted on the FB page that we had a vet visit on Thursday, and the phone lines were jammed with people across the country checking out our legitimacy, to ensure that the story was real and not some sort of scam. Shortly thereafter, Charlie found her voice, and here we are today.

Since then, we have received many calls for aid, some ridiculous, some a little shady, most very heartbreaking, but all you can do is what you can do. What I have learned and was reinforced last night with the horrible situation down in Bastrop is the importance of having immediately available funds. I spent some time growing up on a cattle farm, and one thing is sure: cows cannot seem to give birth to calves during daylight hours. It always seems to happen in the middle of a cold rainy night, when the calf is turned in the birth canal, and the nearest vet might as well be in Outer Mongolia. Rescue animals are the same way.

And not just money for immediate treatment; the dog in Bastrop needed immediate transport to the foster home in Texas, and it killed me to not be able to jump in the car and pull an all nighter, but my employer might not have felt the same urgency when I didn’t show up for work the next day.

So two things are going to happen; first, I’m going to start some sort of foundation, possibly through Patreon, as Gofundme and the like have a slow withdrawal process and that just doesn’t work in this type of situation. Second, I’m going to get off of my lazy behind, finish the book, and hopefully get a bit more financially independent so if needed, I can cut and run at a moment’s notice.

As Johnny Cash said it;

I’ll be sittin’ on dead ready
When my chances come to knock
I’ll make it where I’m going
Standing tall, just like a rock
Passing through…