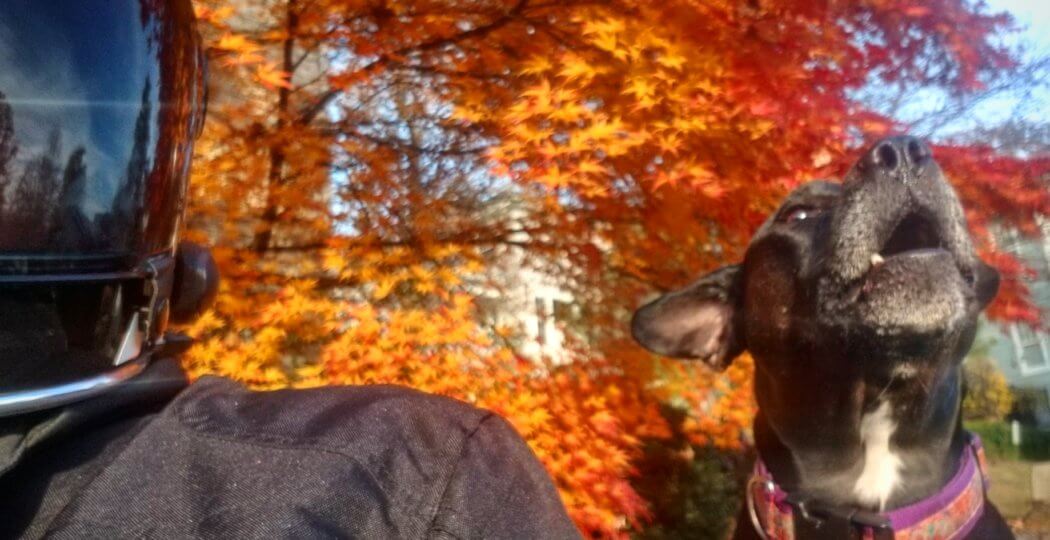 2018 is coming to a close, and it has been an odd one at the Casa. Many life changing events have occurred, but as positive or brutal the events may have been, the change brought on by these occurrences has been slightly anti-climatic. It’s almost like the foundation is being set for a momentous change just over the horizon, but the building project has stalled, pending the chief architect’s release of the final blueprints.

A couple of weeks ago, Charlie was the official mascot for the Motorcycle Overland Travel and Camping Expo in Dallas, TX. It was a great honor to be invited by Audrey Menarik of Motoliberty, but she may be now second-guessing her decision. Nothing excites the Charles like motorcycles and attention, and her CHARK! reverberated continuously throughout the exhibition hall.

One thing that Charlie and I have in common is our inability to fit into polite society for any extended period of time. “Just be yourself”, they say, until we do, and then it’s “you might want to be just be a bit less of yourself”; and I couldn’t agree more. We are both much better suited for the wide open spaces; sometimes our enthusiasm gets the best of us and tends to even alienate those closest to us. While this is regrettable, it also seems to be inevitable, as trying to throttle down the force of nature that is Charlie Bravo is like quenching fire shut up in our bones; if it’s in there, it’s going to come out.

A vendor at the show asked Jo Ann, “what is he hoping to accomplish?”, an innocent enough question to which she had no definite answer. After much thought, I don’t know that I have an answer myself, except “to make a difference”, but isn’t that what we all want? And if you help enough people get what they want, the laws of the universe dictate that eventually you will get what you want, and the cycle of positivity continues.

I was granted a great gift when Zach and I spotted the crate on that raw January day back in 2015 BC(before Charlie), and I have every intention of continuing to share that gift to the best of my ability. I have been very hesitant to consider any type of fund raising to finance the day to day operations of the Casa, let alone the trips out west, as it seems a bit gauche to ask for support when there are much greater needs out there. But on the other hand, it’s the travel that charges our batteries, whether it’s taking the old Subie around the great state of Arkansas, or the motorcycle across the country.

There are big plans afoot; Miss Ellie is being outfitted out as a mini-camping rig to possibly do portions of the Trans American Trail, or even the New Mexico Back Country Discovery Route. Another dream is to take Charlie on the CB1100 up HWY 89, the last two lane road that crosses the US from Mexico to Canada, passing through seven national parks and eleven national monuments.

We will be adding products to the webstore to help finance these missions, and are also considering other options such as Patreon or the equivalent. We are open to any suggestions from our extended family; Henry Ford didn’t know the first thing about building an automobile, but he had enough sense to surround himself by those who did.

So tomorrow night is New Years Eve, and like most of those following this page, we plan on spending it at home with the inmates at the Casa del Whackos. Since mom was out of town last time, we are considering taking another stab at a live broadcast from the Casa, especially since Pete and Delmar are still here and wreaking havoc.

Thanks a million from the bottom of our hairy little hearts for your continued participation, for without the interaction, all this amounts to is a chubby, middle-aged guy and a goofy black dog spouting nonsense on the interweb…

And we all know how weird THAT would be!