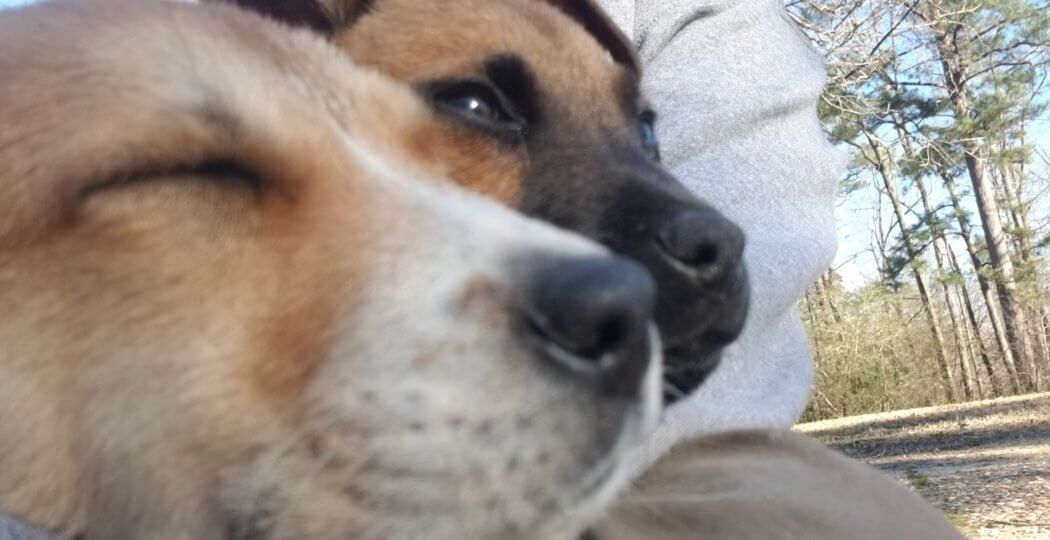 Dad here; a couple of days ago, I was getting the car ready for mom to take Oba(her mom) home to North Carolina. I had stopped at a carwash located on a busy avenue in a less desirable part of town when I spotted what I initially thought were a pair of chihuahuas hanging out in front of a partially abandoned strip mall. I threw the car into gear, cutting across four lanes of traffic only to find not full grown chihuahuas but two small puppies, hips and ribs evident in spite of their distended bellies.

I always carry individual-sized bags of Moist-n-Meaty in the back of my car; I don’t know if that particular brand is the healthiest choice,but I really don’t care; stray dogs seem to like it, and it packs well on the motorcycle as well as the cars. As usual, I was able to bribe the little vagrants, eventually getting them close enough to scoop into the back of the Subie.

Two shady-looking characters were watching the proceedings but offering no help in corralling the pups; it wasn’t until they were in custody(the pups, not the thugs), did they offer to take the dogs off of my hands. Uh, thanks but no, I believe I can handle it from here; besides, my gut was telling me that something just wasn’t right. Far be it from me to judge intent based merely on appearance and demeanor, but I’m no Pollyanna either, and I’m fully aware of the use of bait dogs in the area, so better safe than sorry and home to the Casa we went.

Upon arrival, Pete and Delmar quickly shed their cowering ways and began strutting around like a pair of hairy little Napoleans. I must admit that I had conveniently forgotten what a pain puppies can be; for all the joys of soft coats and puppy breath, they also possess the most barracuda-like teeth and pointy little claws. And output? Lawdy, these goobers seem to be not as much canines as virtual Pez Poop dispensers, leaving their little pyramids wherever it is most probable to be discovered by a bare foot.

One puppy is capable of wreaking enough havoc as it is, but with two puppies, you can divide their intelligence by half, and increase their destructive capabilities to that of a Sherman tank. But eventually the carnage abates and even though you may find yourself being utilized as a dog bed, it doesn’t matter; all is again right with the world.

“Be careful, as ye may be entertaining angels unawares”; sometimes situations or needs are placed in our paths for a reason or a season, either as a distraction or an opportunity to serve. This is the first holiday season since the passing of my dad, and I’m not exactly sure how I feel about it; societal expectations seem to dictate that I should be wracked with grief. But that would contradict the belief that I have that his suffering has ended and a great reward awaits him, and why should I mourn about that?

So with mom gone to North Carolina as well as everything else that has transpired over the last year, this is going to be an odd Christmas, but that is not necessarily a bad thing. As a matter of fact,”odd” describes most of the goings-on at the Casa del Whackos, so why should this be any different?

One thing IS certain; there will be no traditional Nativity scene at the Casa, as there is not even one wise man to be found and instead of a stable full of animals gazing upon a manger in quiet adoration, the beasts will instead be attempting to destroy said stable. The expected gifts of frankincense and myrrh will be replaced with cans of Extra-Strength Lysol and sage-scented candles to counter the aroma of the quagmire that was once the kitchen floor and the cesspool that now occupies the garage.

Tune into the FB page at 9:30PM CST on Christmas Eve for a live video chat and maybe even a reading of “The Night before Charkmas”; you can post your questions and comments there and we’ll just see how it goes…