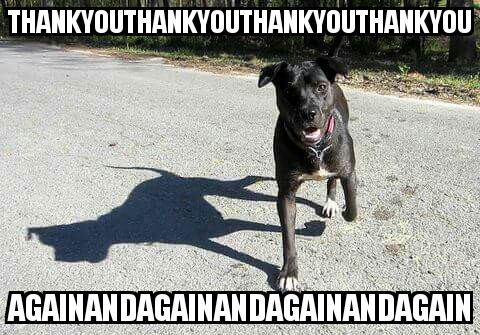 We have houseguests at the Casa, a tiny chihuahua named Leia and a huge walking hormone storm, a redbone hound named Wookie. More on their story later, but the point is that things are busy at the Casa and a post wasn’t forthcoming today. Then dad noticed today was “Blue Monday”, and between that and the political rants last night on the Golden Globe “awards”, I just had to counteract all this negativity.

What is Blue Monday?

It is calculated using a series of factors in a (not particularly scientific) mathematical formula. The factors are: the weather, debt level (specifically, the difference between debt and our ability to pay), the amount of time since Christmas, and how quickly we quit going to the gym in favor of going through the drive-through at McNasty’s.

It was originally conceived by a PR company but has now become an annual event.

Really? Something designed to create a sense of doom created by a PR firm? Who is NOT surprised? And what was the name of this firm Dewey, Cheatum, and Howe? Anyway, moving on…

When is Blue Monday?

The date is generally reported as falling on the third Monday in January, but can also on the second or fourth Monday, or even the Monday of the last week of January, or basically anywhere “they” need to place a holiday for a story. And too bad if it happens to fall on your birthday or anniversary.

Really? A holiday to commemorate depression? If anyone has a right to dwell on their horrible beginnings, it’s a scabby dog discovered in a crate. But I’ve discovered that time spent dwelling on the past is time not spent flouncing in the present, or more importantly, dreaming of the future.

The two best antidotes for times of depression are A: being thankful and B: giving to others who can do nothing in return… Thanks Giving. I propose that we abolish Blue Monday in favor of an early thanksgiving, one celebrated for its true meaning and not just as a prelude to Black Friday.

And the Golden Globes that was televised last night? Should have been called the Golden Gloves. I have never seen a denser concentration of smugly self congratulatory, hyper entitled wastes of space in my life. What is their claim to fame other than being paid massive heaps of money to pretend they’re someone else? I say we celebrate instead the uncelebrated, those whose daily efforts mmake the world a better place.

Today, take the time to bestow your own personal Golden Globe on a previously unrecognized but deserving recipient; you will brighten someone’s day, and probably won’t even have to listen to a fumbling acceptance speech.