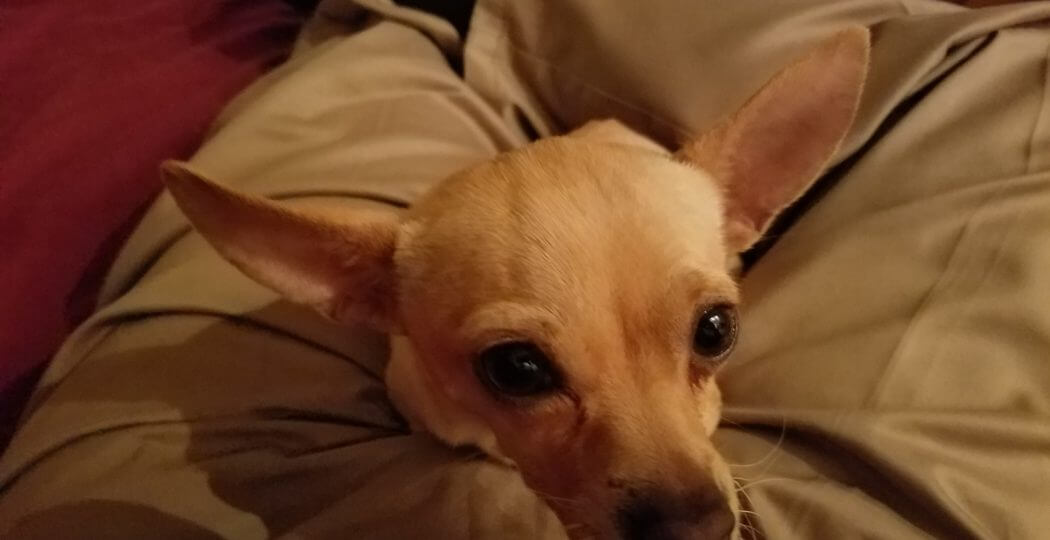 Dad here; I have a good friend with Down’s Syndrome who once told me “I have three boyfriends; and one of them’s a Mexican!” When I asked her how she managed to have three when many single people can’t seem to to find one, she said…

Well, I guess we just attrack ’em as well. First day back at work after an extended period of unidentured servitude; after lunch with the new boss, I’m returning to the terminal when I spot a tiny chihuahua sitting alone in the middle of the vast expanse of concrete. It seemed oddly appropriate that I had some Mexican leftovers in the car, but the little goober was waaaay to savvy to allow himself to be captured while somehow still ending up with all ofmy enchiladas. This was especially embarrasing as he was skinny as a rail and running on three legs, as his front right appeared to be broken.

After anumerous extended time of ritual humiliation at the paws of the Frito Bandito, I tried a different approach, circling him a few times in the car then just nonchalantly opening the door; after a bit, he wandered over to investigate. I scooped him up, and now he thinks he’s the King of the Casa.

Of no small significance to me is that it has been two years to the day that we found Charlie, so of course I had to call Zach and Tara, who of course had to bring Princess Lola over to greet the latest immigrant to sneak across the border.

After work, I chauffered the micro dog over to Landmark Animal Hospital to be checked for a micro chip, and also to have his leg examined. It appears that it was broken at some time in the past, but never set or casted properly; as a result, there is some atrophy of the muscles in that leg, as well as some damage to his rear legs. We went ahead and did a full check up, no chip, no worms, no parasites, clean bill of health except for those legs. The doctor recommended against x-rays at this time, as fixing this problem would involve a specialist who would no doubt want to do their own exam anyway.

According to the vet, chihuahuas are frequently deserted in that part of town, particularly when they have some sort of defect, so here we are. The name Don Fredo doesn’t seem to fit him, so mom started calling him Bull Taco in homage to the famous Spanish motorcycle manufacturer Bultaco.

He likes to be called Bull.

He is obviously going to require some special care, as he can’t jump up on the beds of the Casa. For this reason, I was considering adopting him out to a more suitable domicile, but I’m pretty sure that this action would now result in mom forcibly removing some of my more personal body parts.

So does he complete his immigration process and become a legal citizen of the Casa? Or does he decide to buck the system and continue to evade the border patrol? You’ll have to ask him, as I’m sure that he will have much to say on the subject. As for me, I’m starting to feel like Josey Wales; after setting off on his journey alone, he somehow managed to acquire an entourage, prompting the following:

“I suppose that mangy red-bone hound’s got no place else to go either…
He might as well ride along with us; Hell, everybody else is!”