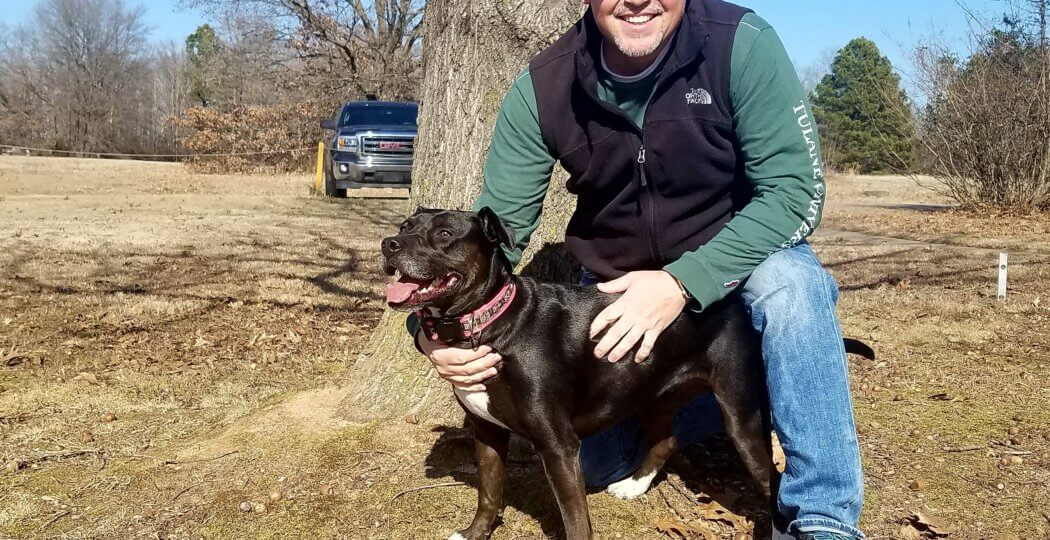 Dad here; Davy Crockett was quoted as saying ” I’m half-horse, half-alligator and a little attached with snapping turtle. I’ve got the fastest horse, the prettiest wife, the surest rifle and the ugliest dog in Texas. My father can lick any man in Kentucky… and I can lick my father. I can hug a bear too close for comfort and eat any man alive opposed to Andy Jackson.”

Well, although I don’t ride a horse and my shooting days are all but over, I’ll have to argue the point about the prettiest wife and the best dog in Arkansas. But just because I think that she’s the best doesn’t mean that I don’t realize what a complete and utter doofus she is as well(I’m talking about Charlie here, in case mom’s reading this).

My buddy Chris has been a supporter of Charlie’s story since day one, but had never actually met her, so Charkilicious and loaded up in the Subie and headed over to make a long overdue social call. Chris’s comment after seeing Charlie in action:

You see, Charlie’s not a large dog, but has this bizarre ability to appear larger in life, kind of like “objects in mirror may be larger than they appear”. She absolutely refuses to be ignored, unless it’s on her terms, and she somehow knows when she has a new audience for which to perform.

As you know, she lives to ride on the back of the motorcycle, and you can only imagine what type of attention this attracts. It falls into one of three categories, A: who does that guy think he is? He should be ashamed, putting that dog in danger, B: how cool is THAT?, let’s run them off of the road trying to take a picture, and C: what motorcycle? I was too busy texting.

Invariably, we will find ourselves talking to someone about the story of the crate, and that’s just fine with Charlie until she decides that we’ve remained stationary a little too long to suit Her Royal Hiney, and she will announce her displeasure with an earsplitting “CHARK!!”. She knows that discipline is not forthcoming because A, I’m a wuss, and B, there are witnessess; I know this because between every Chark, she will cut her eyes at me to make sure that I am listening. Eventually I have no choice but to cave in to her wishes, and we hit the road again, which suits her just fine; we’re off and rolling, she has dad to herself, but most importantly (to her), she once again affirmed her position as the Queen of the Casa del Whackos.

Many have told me that I need to train her as a therapy dog; are you kidding me? Can you imagine this flouncing force of nature wreaking havoc in a hospital or nursing home? Maybe someday, but right now, I love the nut job the way she is in her own natural habitat, which just so happens to coincide with mine at this particular time; carving the backroads of Arkansas and elsewhere on a Honda motorcycle. The day will come soon enough that one or both of us won’t be willing or able to continue down this path, and the venue and message will have to change, but until then…