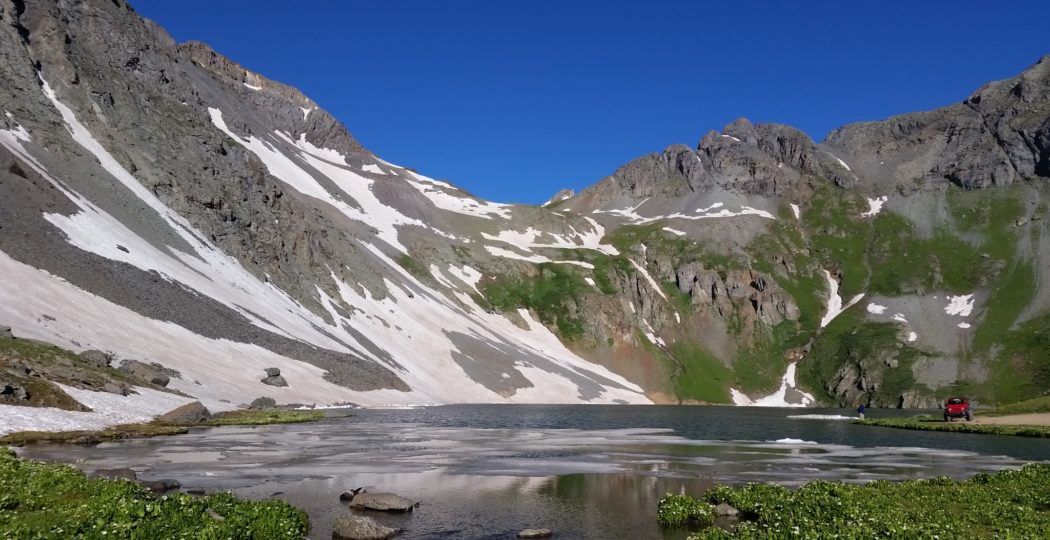 We had every intention of camping at Clear Lake last night, but thought better of it when dad did the math; you lose approximately 10° for every 1000′ of elevation change, and it was in the low 40’s at 9000 where we are, and Clear Lake is 12,200′ with 40 MPH winds at the summit. I could just imagine our tent sailing off of the top of the mountain like a yellow hang glider with a hapless dog and old fat guy snoring blissfully inside; no thank you, I’ll hog the sleeping bag down here,and we’ll make the ascent in the morning.

Timberline starts at around 11,000, where all trees and larger vegetation gives way to alpine wildflowers and grasses; every thing is smaller and more hardy up there, but also more beautiful, the colors being much more vibrant.

With the exception of the marmots;

for something that appears as pudgy and soft as they do, those little varmints have no problem darting up and down sheer cliffs that this girl wouldn’t even consider, so I wisely didn’t even try. Sometimes discretion is the better part of valor…

I haven’t even began to describe the wonders of Clear Lake; I dedicated a whole chapter in the upcoming book to this place, and still didn’t even scratch the surface. Imagine a crystal lake hanging on the side of a mountain with even higher peaks soaring out of its icy depths, and the wind seperating miniature icebergs from the shore and setting them adrift. The contrast between the azure blue of the skies and the snow white clouds provides the back drop for this epic panorama; photos don’t begin to do it justice, but they will have to suffice, as this is a incredibly difficult place to attain. Then again, most of the best places are.

There were some heavy duty land rovers camped just below the summit, no tents for them, that said that the winds the night before were so extreme that it almost toppled their rigs. They had a goofy rescue dog like myself, and the majesty of the place was immediately sullied by the tomfoolery of two hyperactive buffoons who’s brain functions were obviously affected by the lack of oxygen. Again, pictures at a later date will have to suffice, as there aren’t enough words in the English language to describe this scene. That, and the pictures are on dad’s other camera, and any kind of cell coverage is non existent in these parts.

There is soooo much more to show and tell about this day; not even 1100 AM, and we still have to cross Ophir Pass at 11,789′, then on to Telluride and Last Dollar Pass before ending up back in Ouray. This week is coming to an end waaaay too quickly as the reality of life back home beckons; the bad part of living the dream is the knowledge that the alarm is always about to go off.