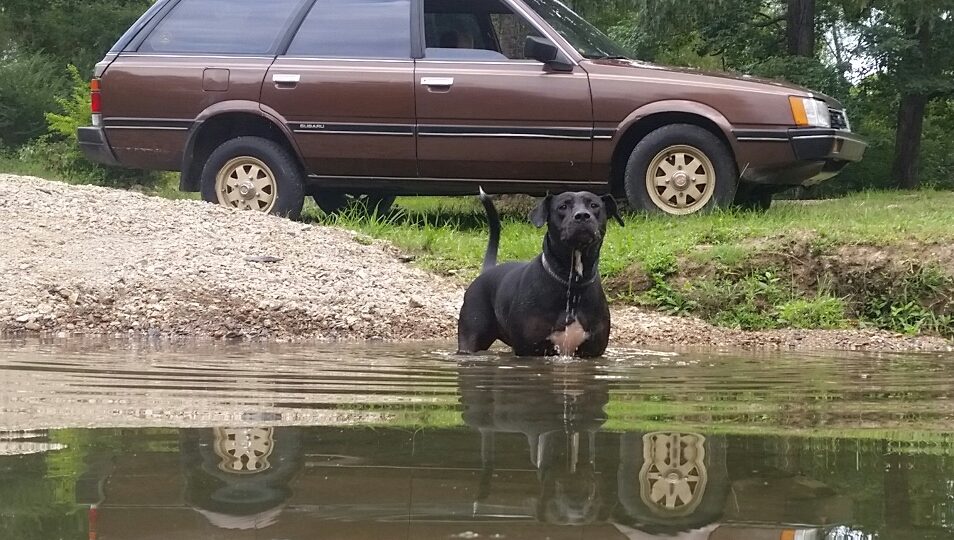 Dad here; Charlie is worn out from her flouncing about yesterday, so I have the helm this Sunday morning at the Casa. The hummingbirds are back en masse and contesting with the yellow jackets and wasps for supremacy over the feeders (more on this epic battle on a later post), and the heat and stupidity have yet to build into another Arkansas day.

Ellie had her first real shakedown yesterday, a mixture of off road, twisty backroads, interstate, etc, everything that she would experience on a trek to Colorado(albeit on a smaller scale), and she did fantastic. That’s not to say she has her limitations, but don’t we all?

She positively screams the 80’s; no ABS, air bags, cup holders, (but not one but TWO ash trays),and no vanity mirrors. Her “sound system” consists of a crackling AM/FM, push button radio that seems to pick up an inordinate amount of
Wang Chung, Flock of Seagulls and Talking Heads, with the occasional “Smells like Teen Spirit” thrown into the mix in an effort to keep fron further dating herself. She even smells like the 80’s, a mixture of eau de dust and essence of sun bleached vinyl; don’t get me wrong, her interior is immaculate, but the only way that you could increase this atmosphere is by spilling bong water under the front seat(don’t ask me how I know this).

Her suspension is also old school as well, swaying and caroming between the rumble strips like a brown pinball on 13″ wheels. If someone cuts her off in traffic, it’s akin to sitting on a hot stove; if you remain there long enough, you’ll have to learn to like it. Besides, the odds of her accelerating quickly enough to you can get close enough to throw the offender the “stink eye”, are slim to none, so you might as well just relax and act like you planned it that way.

I may have to rethink my wardrobe and start lurking at the local thrift stores in search of Members Only jackets, high top Reeboks and leg warmers; scratch that last item, as I’m way way too short and it would end up looking like I was wearing accordions on my legs. By the way, growing a Flock of Seagulls-type hairdo is also out of the question, so don’t bother suggesting it.

You would think that these would be limitations, but I think they are actually attributes; she has “soul”, which can only be gained by years of experience. Besides, 55 is the new 70; Charlie loves hanging her head out of the window up to and not above 55 MPH, and it seems that Miss Ellie likes that tempo as well, so who am I to upset the apple cart?

Like many of us reading this, it sometimes seems that we are viewing our best years in the rear view mirrors, but it’s never too late to start a new adventure; I’m sure that Miss Ellie never saw this situation coming, just as Charlie never saw her redemption from the crate arriving in the form of two Honda motorcycles. Or even myself, in the guise of first encountering a fellow rider struck down by a drunk driver and then the unlikely act of simply finding an emaciated dog stuffed in a crate and left to starve. Now here we are, wherever “here” is, on a brand new journey,destination unknown, but what matters is that we’re still moving.

It would seem that self discovery is better attained by not looking inward, but instead looking outward, always vigilant for that sometimes seemingly “lost cause”;

Service every need as it arises and you will find your ministry; just ask Ellie.