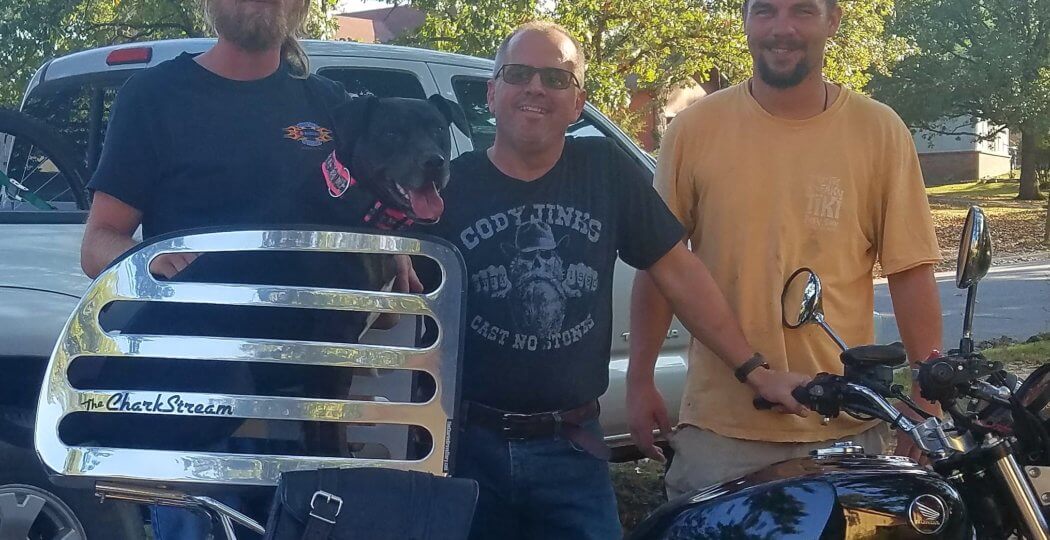 Dad here; thunder rattles the windows of the Casa, but the inmates pay it no heed; rain has been long in coming and besides, it’s Sunday morning. Mom has long since fled to another room with Ajax and Marco in her wake in an attempt to escape the expanding black flood that is Charlie sprawled across the bed. Echo and Mia have refused the mandatory evacuation orders to go outside, so everyone is hunkered down in anticipation of the coming storm.

The completion of the Charkstream brought with it a case of borderline anxiety; even though the outcome was successful beyond my wildest dreams, the end of the project left me thinking “now what?”; now I have no excuse to keep me from the next stage of the adventure.

The problem is, I have no idea what the next stage is.

Four years ago I made the acquaintance of two long-haired country boy misfits from a small town in south east Arkansas. To describe them as “misfits” is meant as a huge compliment, as it was obvious that these two refused to fit into whatever mold that rural society, or any particular society for that matter, would place them. Well-spoken, polite and thoughtful to a fault, they had hatched a plan where they were going to travel to Colorado via small Enduro motorcycles, and travel the state on a budget of 30.00 a day in search of answers to unasked questions.

Since they were passing through Little Rock, I suggested that they stop and get their mojo right by meeting Trevor, the motorcycle traveler that had been struck down by the drunk driver. Afterwards, we said our goodbyes and watched them peel off towards Kansas on bikes appearing to be loaded for a weekend excursion, not a months-long journey. I remember a massive knot in my stomach and a voice in my head saying “GO”; 50 years old and I had never even attempted such a journey; if not now, when? What was I waiting for?

Later that night, I was standing out in the garage, looking at my 1991 Nighthawk and envisioning where I would hang my saddlebags, tent, sleeping bag and other luggage when mom walks out and says “you’re going to Colorado, aren’t you?”.

That woman knows me way too well.

And that’s how, two days later, I came to find myself in a mad dash across Oklahoma with no destination in mind except “out there”. The first night, a severe hailstorm pushed me north towards the panhandle of Texas; although I didn’t know it at the time, another severe storm system in Kansas had shredded the tents of the Dumas boys and pushed them to the south. The result was that we ended up meeting in Salida, Co and the decided to combine our meager resources to cross the Rockies over into Utah.

The following days were life changing for all concerned, but the incredible experiences always somewhat tainted by thoughts of issues that each of us must address when we returned home. Why is it so difficult to banish such thoughts, even in such a place?

Well, it turns out that a near death experience will snap it back into focus, that’s for sure.

We eventually parted ways and they headed south towards New Mexico and I into Utah, and eventually we all arrived safely back at our respective humdrum domiciles in Arkansas. I remember pulling up into the driveway and thinking that, even though the wheels were no longer rolling, the trip was just starting, a trip that continues to this day.

Yesterday was the first time we had all seen each other since that trip, and it felt like a circle had been completed, but a circle is like a line in that there is no beginning or end, it continues on forever; it’s not about the destination, it’s about the people you affect on the journey.

How’s that for a run-on sentence? A whole paragraph, it must be some sort of record!

So what does this all have to do with Charlie Bravo? If there hadn’t been a Trevor, there would never have been a trip with the Dumas boys, which started my fixation with solitary travel and dabbling with writing ride reports. The trips, the writing, the fundraising for Trevor, Special Olympics, and now Charlie’s ministry, all seperate but similar experiences that join together to point toward a still unknown spot on the far horizon.

As I left the Dumas boys yesterday and Charlie and I headed home to the Casa, it occurred to me that what we’re doing IS a ministry, and I have the inestimable honor of being able to ride our pulpit and preach without saying a word. And the message? That we don’t have to continue living in some sort of crate. That each life, and each action, no matter how how small it it may seem, matters greatly in the master plan.