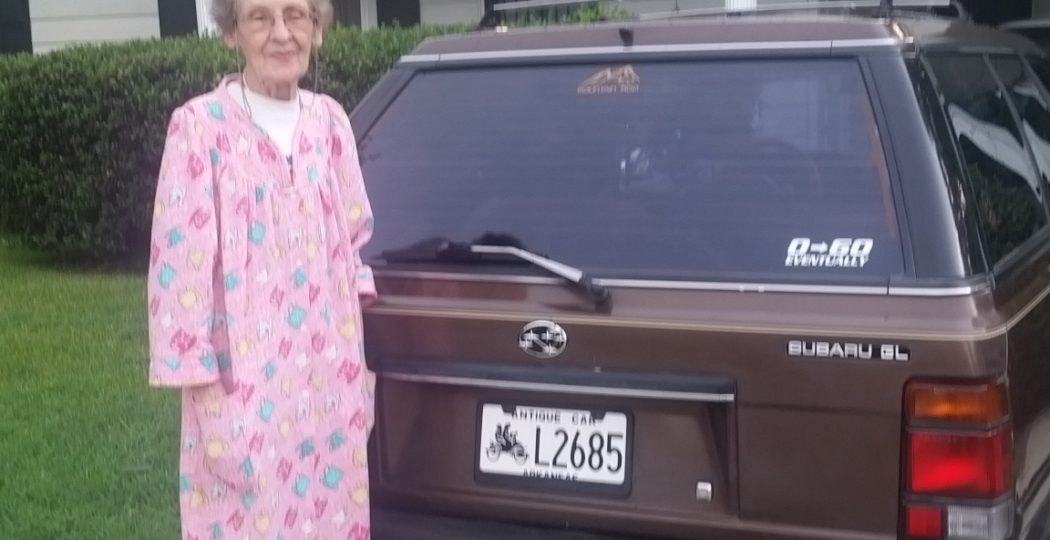 Miss Ellie here; it’s been a looong recovery for  this old girl. What was supposed to be a relatively straight forward procedure with a week recovery time stretched into a two month saga, essentially doubling the original estimate and causing me to miss the Colorado trip,but now that’s all now behind me and my prognosis is excellent.

Imagine my joy when mom dropped off not just dad, but also Charlie and Max to pick me up; two months without a single paw print on my interior or a snot smear to my windows is way too long for me,  an oversight that Charlie immediately remedied.

The ride home was one I will never forget, the hateful rattle in my chest now replaced by a pleasant rumble, Max in his place beside dad and Charlie, well, you know Charlie, she was everywhere else. My A/C got a rest and my windows got a work out as the goofus just had to stick her out first one, the the other, then back to the front where Max stoically sat in mute disapproval at her shenanigans.

We rolled up the driveway at the Casa, and I requested that I immediately be cleansed of the grime and dust from my incarceration. After an extensive shower and pedicure, what was left to do but go for another ride? But to where? As it turned out, dad had a plan.

As you know, until I was adopted into the Casa, I had known only one other home, that of Pop and Mrs M. I shared my spot in the carport with another Subaru, Ma’s Justy for thirty years until Pop passed. Dad had found my previous address on some paperwork in my glove box, and always wanted to meet the widow, so after I got all gussied up, we went to pay our respects; of course, Charlie just HAD to go as well.

We pulled into the driveway, and there it was; my old home, Justy nonchalantly lounging in her usual spot as if not a minute had passed. Dad rang the doorbell and when a striking black woman answered the door, thought that he had the wrong address, or possibly the house had been sold. The woman’s jaw dropped to see not just the familiar car in the driveway but also to witness a sleek black dog vault out of the driver’s side window.

Behind her stood Ma, her lip quivering at the sight of her deceased husband’s car, a monument to a different epoch. Her first intelligible words were music to my ears:

“Jimmie would be so proud!”

After the initial shock wore off and the pandemonium, certain mysteries came to light; the lighter shade on the driver side door the result of a long ago fender bender, the care that Pops lavished on me, etc, but the real mystery was the lady that had answered the door, and how did she know Charlie?

It turns out that she was a neighbor and companion that helps Mrs M out from time to time; she has a friend in Florida that follows Charlie’s ramblings who had turned her on to the Facebook page, and she now also follows it faithfully.  She immediately recognized CB as the out of control force of nature that she is. Imagine that, a car, a dog, three seperate households, many states and years seperated, all brought together by one improbable but factual story.

So now dad has a date planned with Mrs. M; somehow, I don’t think mom will mind. He found out that Captain D’s is a personal favorite, so as soon as it cools a bit, a picnic is in the works, and I get to do the honors as the chariot of choice.  Also, dad was made to promise to let Mrs. M babysit Charlie occasionaly during the day, although I don’t think that this is the voice of wisdom; the term “bull in a China shop” comes immediately to mind.

And if you think it’s all over for you, but you’re alive to read this? You also are about to be proven wrong, just wait and see.

Miss Ellie, over and out.