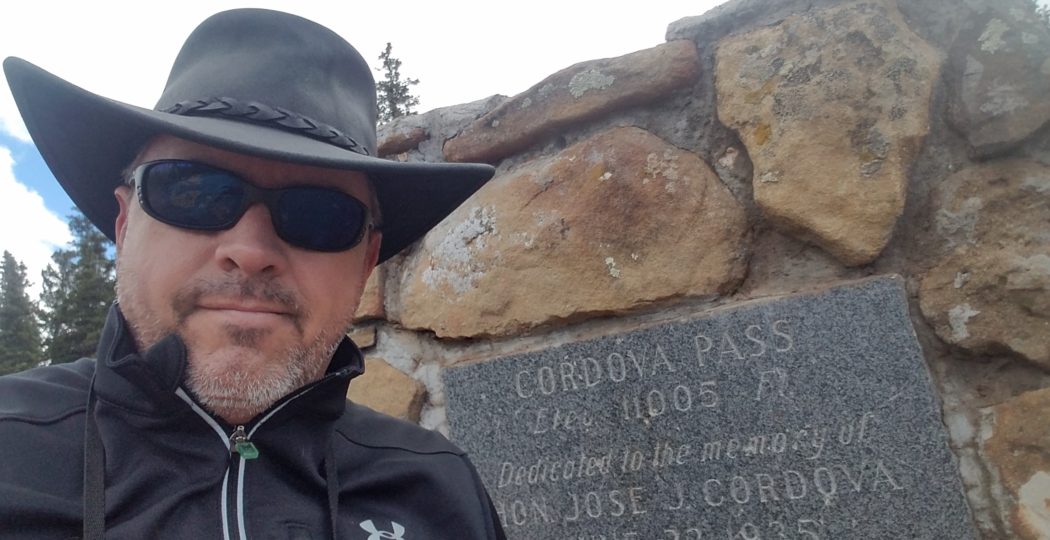 We should have made it home by now, but dad seems to have a love/hate relationship with those state signs positioned at every border crossing. He loves the anticipation of seeing them approach through the haze of bug guts on the windshield, but gets a feeling of sickness and dread in the pit of his stomach when one recedes in the rear view mirror; “well, we won’t be seeing THAT one again for a while…(heavy sigh)(suppressed sob)”.

We had every intention of leaving Raton early yesterday and rolling hard towards the east and the Casa, but the magnetic pull of the Spanish Peaks just to our north was too much for the steel of dad’s wanderlust, and we once again found ourselves passing a rustic “Colorful Colorado” portal. Dad’s obviously flawed reasoning was to poke around a bit in the high country before bending it left around noon, which would make the final day on the road a relatively easy one: even from the back seat I could literally hear mom’s eyes rolling back in her head like the apples and oranges on a one-armed bandit, although dad would have to find his own jackpot.

Just like the rest of the trip, the details of this particular day are waaaaay too varied to fit into this particular blog, and will have to somehow be worked into future posts. Suffice to say that at the appointed hour of departure, we instead found ourselves on a high mountain trail at 11,500′, with a storm bearing in from the north. The temps plummeted and the clouds rolled in so quickly that visibility dropped to mere feet within minutes, just perfect for concealing any predators, imaginary or otherwise, in the swirling mist. This cover was also instrumental in obscuring from mom the fact that Max was indulging freely in his particular affinity for marmot poop, a fact that would come back to haunt us later in the story.

Then down, down, down, like a trickle transforming into a river as it descends, the trail gave way to a dirt road, then the dirt transformed into asphalt, the two lane transformed into interstate and the ubiquitous yellow “New Mexico, Land of Enchantment” sign, with its perky red and yellow peppers.

In an unsuccessful attempt to make up for lost time, we rolled long and hard, the gathering darkness to the east concealing predators of a different kind, the black and white patrol cars of the first the Texas, then Oklahoma, State Police. They possess a particular force known to dad as “Pucker Power”, or “Mobile Reality”; that the mere sight of a government agency vehicle can provoke such a feeling of guilt in an otherwise innocent person is a post for another day. “To protect and to serve” is a lovely sentiment, but “We’ll leave you alone until you actually warrant otherwise” is much preferable.

Tired, smelly, and cranky, we finally decided to shut it down for the night and were looking for a suitable bivouac when we hear a liquid “YAAAARCH” from the back seat, followed by a stench that can only be described as “the armpit of Satan”.

It obviously had been fermenting in Max’s reactor core across four states, two time zones and multiple elevation changes, only to go into meltdown when mom and dad were least equipped to deal with it. Hazmat teams were scrambled from the surrounding states, blankets and towels were burned, and, for once, I stayed out of the way.

Now, it’s morning, and the sun is glinting off of our fine collection of insect innards as we speed, er, advance with alacrity, towards home: I feel very confident that you could start a small entymology museum with the specimens embedded in our grill.

Next stop, the Casa.