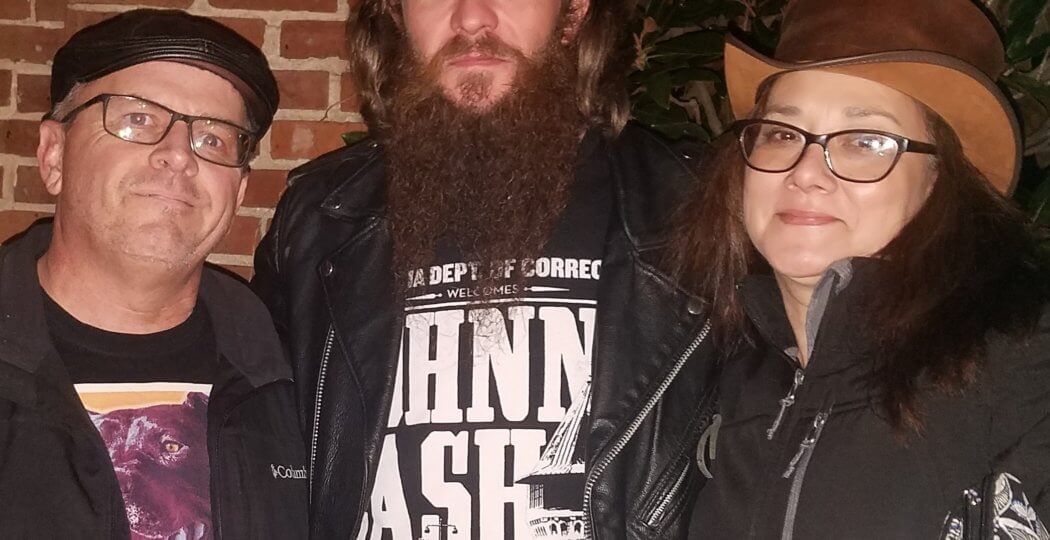 Dad here; I have officially given up on all hope. Any glint of daylight that I could sense just over the horizon has been forever extinguished, and I must resign myself to the sad but undeniable fact:

I will never be normal.

Friday night mom and celebrated our thirtieth anniversary by going to Oxford, MS to see Cody Jinks perform. Cody has recently become the soundtrack of the Casa del Whackos, as far as I’m concerned anyway, so we left the inmates in the care of Kat and we headed southeast across the delta.

Charlie was NOT pleased.

Anyway, the concert was progressing, Cody was bringing down the house as usual, then brought it down into the obligatory slow song “She’s All Mine”, and everyone around us goes all googly-eyed. Well, after thirty years of kids, dogs, tragedies, good times, bad times, and reality in general, what appears to be overly-affected sentimentality feels a little false to me. But, hey, I’ll give it the old college try, and I put my arm around mom. “Good move, dad” my inner Valentino tells me, until I realize to my dismay that I’m rubbing and patting her back in a fashion that I’ve perfected during a lifetime of loving on dogs.

Now before you start breaking out the torches and pitchforks, I’m not saying mom is a dog. On the contrary, I wouldn’t trade her for anyone on the planet, but in a moment of absentmindedness, you’ll have to forgive me if I reverted to old habits and the moment went from romantic to slightly weird in a nanosecond. Luckily, the song ended, and I was let off of the hook.

We were on the way home to Arkansas the next morning when she commented how nice it was that I put my arm around her. A “normal” person, or at least one that has more than two random brain cells bouncing around inside thier black hole of a skull, would have acknowledged the comment gracefully and then had the sense to shut his mouth and not risk self-incrimination, and all would have been well.

Did you catch the part earlier about not being normal?

As usual, my mouth went into gear before my brain engaged, and before I could stop myself, I had vomited the truth of the matter, and swallowing it back down was not an option. When she finally quit belly laughing, she said she had wondered why I had been patting her,and more importantly, why I had so abruptly stopped. I told her that it was because I figured that she didn’t like it, as when I scratch or pat a dog in just the right way, I’m rewarded by at least seeing a leg kick, and I saw no such response the night before. Her response was that she didn’t have room in the standing room only crowd to flip over on her back so I could rub that one ticklish spot on her belly, and a conversation that was already weird entered a whole different level of weirdness.

So as a public service to those of you that are currently looking for a long term relationship with a significant other, we would like to present our tips on choosing a partner based on how thoroughly we have been indoctrinated by our dogs over the last thirty years. Before we begin, we would like to go on record as saying that we do not endorse the butt sniffing method of introduction, as although it seems to work for canines and would appear be more accurate than on-line dating services, we feel it could possibly send the wrong message to another human, in addition to being difficult to perform in western clothing.

As a first test of compatibility, we would suggest the proffered back-of-the-hand sniff. If your date immediately flips over on their back in a gesture of submission, you’re going to have some inferiority issues to deal with on down the road. Additional points should be deducted if they pee on themselves, as this means they probably share space with their Star Trek collection in their mother’s basement, or hoard shelves full of scary-eyed dolls.

On the other hand, so to speak, if they’re so picky about how they’re approached, hand under the chin or hsnd over the head, that they snap or snarl at you, they probably have aggression or dominance tendencies and it would probably be best to quickly move on to the next kennel at the shelter.

But if you have an old dog around the house that’s making an effort to do what’s right, however misguided his/her methods may appear to be, you might want to make sure they’re microchipped, as that one’s a keeper. Sure, the younger ones are cute, but who wants to potty train another puppy?

Sometimes the best ability is stickability.

So, the train of hope, of achieving any type of normalcy in my lifetime, has officially left the station, and mom says she’s good with that. Which is dang good thing, as she couldn’t run me off now if she wanted to.

And in the next thrilling episode of Hope for the Hopeless 2.0, we have a report from the Helena Animal Shelter, so don’t forget to tune in and tune out.

It’s always a party at the Casa del Whackos.