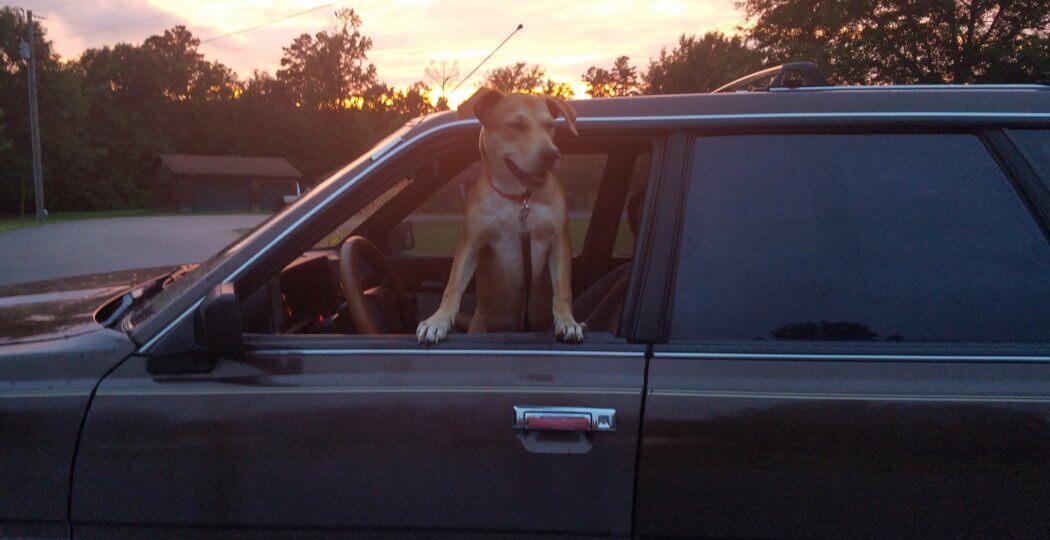 For most of the inmates of the Casa del Whackos, things seem to come hard and fast. I guess that we have no one to blame but ourselves, as life tends to come at you faster when you twist the throttle, or in my case, double pump my accelerator.

Miss Ellie the old Subaru here; since my semi-retirement at the Casa, I’ve been spending my days drowsing under my cover out back, but always ready to have my carburetor tickled and feel the fluids start to once again flow.

Dad and Charlie didn’t even have a chance to get the bike unloaded from their recent trip out west when they received a call from a dog in need; it seems someone had dumped a sleek girl at a local truck stop, and to add insult to injury, she was obviously recovering from a recent surgery. Sometimes all you can do is the best you can do and worry about it at night, and that’s exactly what a lady named Ginger did, taking the personable girl to a local shelter.

But sometimes life isn’t what’s featured on a cereal box, and the shelter turned out to be a high kill shelter due to overcrowding; when this was discovered, others attempted to adopt her before she could be put down. The problem was that she was scheduled for the big sleep on Monday, and Monday was the first day that the shelter was open for adoption. Obviously, quick action was in order.

To be brutally honest, dad was not especially pleased to be enlisted, but what are you going to do? Sometimes doing what’s right is not always easy. But that conscience-thing (and mom) started applying the pressure, and that’s when my services as official rescue vehicle of the Casa del Whackos were reactivated, and off we went on another mission.

So now there’s another inmate (for now) at the asylum, and her name (for now) is Sandy.
She was obviously someone’s dog, as she hopped right up and immediately hogged my passenger seat like she had been there her whole life. When we got to the Casa, she invited herself right in. She appears to be less than a year old, and her recent surgery was to remove her lady bits. She has not been microchipped, just another casualty in the ongoing War of Indifference.

Or not; I must admit, it felt pretty dang sparky to once more be of service. Sitting out back under a tarp is NOT how this old girl envisions spending her golden years, so we’ll have to wait and see how this situation unfolds. I do know that we’re running out of accommodations at the Casa, but somehow, things always work out.