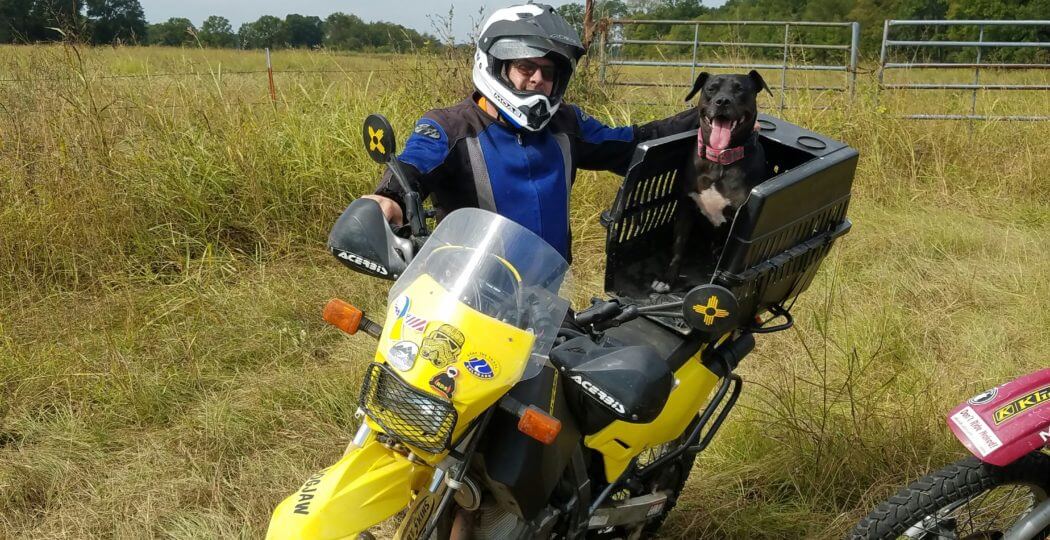 Yesterday was one of those days that makes me glad to be from Arkansas: 72° in mid-January. Dad started making some noise about taking Miss Ellie for a spin, a plan which I quickly quashed using the power of my executive veto. I made my thoughts clear in favor of taking the motorcycle because A: it IS the motorcycle(like duh!), and B: if we take the car, Max will find a way to finagle his hairy little self on board, and I need some dad and me time.

So we headed towards the pretentious hills west of Little Rock, taking the roads “home, home, on the range, where the doctors and attorneys play, where seldom is heard, an encouraging words, and the snobbery is practiced each day”.

Picture this: a charking Charlie dog prancing about in a repurposed dog crate, a short pilot navigating what most would see as a dirt bike through a sea of German and Swedish Tupperware mobile Tupperware. Judging from the disapproving stares and scowls of the drivers trapped therein, these new vehicles must come equipped from the factory with the latest in soul-sucking technology; I don’t know about you, but I were going to drop that kind of coin on a pile of rubber and steel, I would at least try to act a bit enthused about it.

As the rolling roadblocks began to thin and the road began to rise, we were able to quicken the pace; not actually “speeding”, mind you, but “riding spiritedly” or “advancing with alacrity”. Dad chooses to view encounters with the local constabulatory not so much as “traffic citations”, but as the much more positive sounding term “performance awards”. Mom would disagree, but perception is reality.

Thre are many kennels and groomers in the area west of town, catering to the strange concentration of pampered show dogs and security Rotties, Dobies, and Shepherds with slightly sinister Nordic names. As we merrily burbled past these communities whose imposing gates alone cost more than entire Estate de la Casa del Whackos, I had to ponder: are the inhabitants behind those walls any happier than we? Do those pedigreed pups care any more or less for their respective dads than I do?

No, for better or worse, they have the same concerns and fears as we, just on a far grander scale. It occurred to me that a multi million dollar mansion can by just as confining a crate as my plastic box was on that raw day back in January 2015. Regardless of our pedigreesc and social status, we are all of one blood.

As the thunderclouds began to build towards the west, we turned the bike back towards the cacophony of the Casa. The first fat raindrops began to a pelt dad as he sought refuge behind the small windshield, but I maintained my position over his right shoulder; rain is just another part of the overall experience, and as uncomfortable as it may seem, I’m here to experience it all.

Please remember to like, comment or better yet, Chare or Chop the Web store. A Charlie share is a “Chare”, and when Charlie goes to the store, the diva loves to go “chopping”!