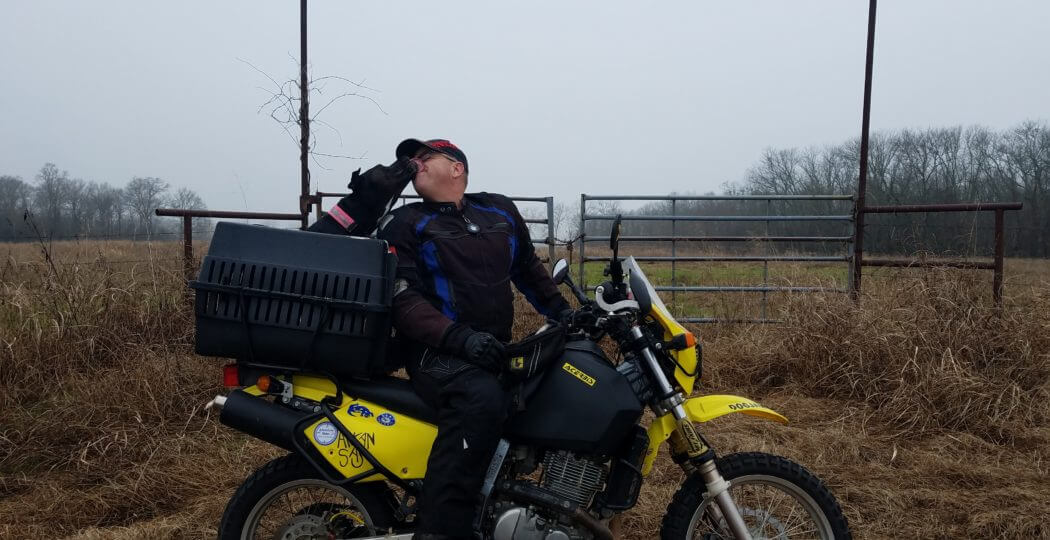 The sun has only dared to challenge the fog five days out of the last forty five, and this morning is no different. I’m in my customary spot, wadded up against dad, and the rest of the dogs look like they have been dropped from the sky, sprawled in whatever position gravity left them when they hit the bed.

Climate-wise, yesterday was much like the day dad and I met; cold, cloudy, the asphalt gooseslick greasy with dew. Most normal people would not consider this to be an auspicious day for a ride, but as it’s been noted many times before, we’re anything but normal. Gary had suggested some additional pics for the blog, so mom offered to follow along with Miss Ellie as we headed out to “The Spot”. As you know, this area is a prime dumping ground for those dogs less fortunate, so she prepared by loading up with dog food for the inevitable encounter.

The fog was so dense that dad’s visor was coated both inside and out, quickly rendering it useless, so he had to navigate through the funk without it; I did my best to assist from my customary perch with my head on his right shoulder, but I’m afraid I wasn’t much help either.

As soon as we turned from the main road towards Stevie’s bridge, dad spotted what he had feared; a clutch of buzzards in the ditch, gathered around a pile of plastic tarp, the last resting place of one of my kind.

This area is very difficult to police, as not only is it a large rural area in close proximity to downtown Little Rock, it is also frequented by birdwatchers, rabbit and dove hunters, and the occasional farm workers just passing through. Every harmless vehicle encountered takes on a sinister air, especially those parked on the sides of the road; dad has a habit of stopping to supposedly ask if they need assistance, but his real motive is to sneak a quick peek into their back seats.

After numerous such encounters, we made it to my spot on the road, and guess what?

It’s still just a spot on the road.

Even though it was once the site of a terrible time in my life, I’m now so far past that particular era that it’s like I’m not even the same dog, so I guess in some ways, maybe it’s not even the same spot after all.

I can only imagine that, like me, you have your personal spots, times and places of heartbreak and despair. But there comes a time to motor on down the road, and let these spots become what they were always meant to be, places to be remembered but celebrated, not vilified.

As do I; on the very spot where I once cowered in my crate, I ignored the fog and cold, and I flounced and charked and rolled and thrashed like a complete lunatic until dad finally had to use The Voice; so we saddled up and headed home to the insanity of the Casa del Whackos.