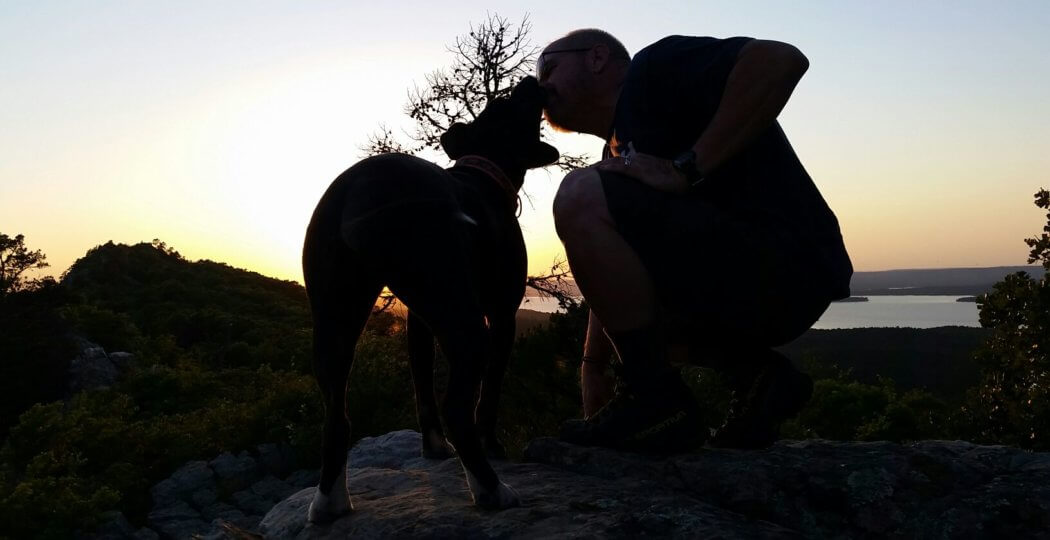 They say you can’t go back, and if you do, it will never be the same; most of the time that’s true, but on those rare occasions…

There is a large rocky out-cropping west of town that shows on some maps as “West Pinnacle”, but we locals always called it Rattlesnake Ridge. Back in the day, it was a wild and desolate place, a narrow spine of rock rising high above the surrounding hills, snaking its way towards a summit in the west.

My two partners in crime at the time, a father-son duo of Eskimo Spitz dogs named Uki and Boo, would climb it before sunrise, and as often as not, my buddy Kyle would be part of the expedition. I wish you could see what we felt: double rainbows, a massive cloud bank off of Lake Maumelle to the north, rolling like a tidal wave of cotton south towards Little Rock, buzzards wheeling in the sky below us in mute disapproval at having their thrones disturbed by a trio of would be explorers.

One morning, while waiting on the sun to perform his daily duty, the dogs and I feel asleep at the summit. We awoke to the awfullest racket you can imagine: a flock of huge Canadian Geese has flown up the north slope from the lake below and popped over the ridge where we were dozing less than ten feet over our heads.

Then local “developers” discovered the beauty of the ridge, and began to build multimillion crates around its base, and that was that. With no point of access that didn’t involve jail time, for the last twenty-plus years we could only ogle those rocky spires from afar and remember days gone by.

Then recently, we found out that a local philanthropist, Lee Bodenhammer, had somehow secured access to the rock, and it had been declared an Arkansas Natural Area, so we had to go check it out, to see how much had changed over the years, both it and myself.

Charlie and I headed off towards the summit a couple of hours before sunset; even though it was exciting to be visiting the old girl again, I must admit that it was also bittersweet to remember faces from excursions up the rock from years past. As tbe trail began to turn sharply upwards, a familiar figure appeared; could it be… sure enough, it was Fletch, the Passive Aggressive Potter.

Most people know Fletch as the very laid back, world class artisan that he is, but I see through his facade. I know for a fact that his primary purpose that day was to beat me to the ridge so he could flaunt the photos, which is one of the reasons I like the guy; anybody that would put themselves out to that level just to achieve a little one-upmanship is alright by me.

So as it turned out, once again it was three of us, Fletch, Charlie Bravo and myself, plowing through the undergrowth towards the sunset. Was it the same as all those years ago? Not on your life; it was definitely different, but different is not necessarily better or worse. Like a relationship long thought dormant, “different” can mean the same group of words contained in a new pair of quotation marks; context means everything.

Do I still miss Uki and Boo and Kyle and the other faces from “the good old days”? Of course I do, but now I have Charlie and Fletch, and someday these will be “the good old days”. No need to rush through these as I did before, although I probably will.

Old habits are hard to break.