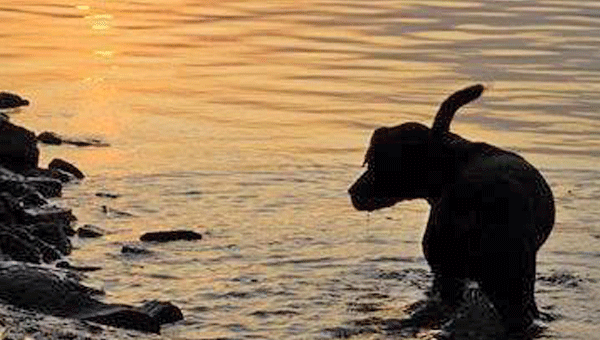 Before the dawn, silence reigns supreme over the Casa del Whackos. The forecasted storms of last night have grumbled away to the east, taking both their bark and bite with them, but leaving in their wake their hot, moist breath.

Due to the heat and stupidity of this time of year, we inmates have to find our adventures when and where we can; Marco Polo loves above all else to ride in the car, but has be relegated to dad giving him a ride around the block before leaving for work. With me, it is and always has been the motorcycles, but we must leave very early or go very late, as the hot sun baking down on this black diva’s head can turn downright dangerous in a hurry.

This is why we don’t fuss as much as usual when dad leaves us behind and takes his Salsa bicycle down to the River Trail to grind out some miles; let the old guy sweat like Mike Tyson at a spelling bee if he is so inclined. We elect to stay sprawled out on the bed in the AC until he comes home completely soaked and smelling like the devil’s armpit, then mom hustles him off to the shower, using the same time of voice that she uses on me when I’ve been a bit too cavalier with my flouncing in the muddy ditch out in front of the Casa.

Yesterday was such a day; dad lounged around the Casa a bit longer than he should have, and the sun was already towards the apex of its zenith when dad pushed away from the comfort of the Subaru. The first ten miles were alone and uneventful, with most right-thinking people already back home in the safety of their climate control systems.

Then dad spotted an older man on the trail, berating his motorized wheelchair like a recalcitrant mule in an effort to get her off of her haunches and towards the feed trough. The man was a homeless sort, and had evidently let his power deplete to the point that it would only roll with assistance, and he was trying to get it pushed to the nearest power outlet over a mile away.

So what do you do? A good ride interrupted by an even better opportunity to make a bit of a difference doesn’t seem like much of a no-brainer to me, so dad offered to push the wheelchair if the man would push his bike. What he failed to take into account is that the batteries in a wheelchair weigh as much as a small tug boat, and the wheels soon begin to feel like they were mired in the hot asphalt of the trail.

The purpose of life is not to be happy, it is to serve our Maker, whoever you envision Him to be, by serving our fellow man. It is to be useful, to be honorable, to be compassionate, to have it make some difference that you have lived and lived well.

As dad began to run out of steam with the exception of what he was trying to force into his over-taxed lungs, a pair of Peter Cottontails came prancing down the River Trail. You know the type, taut, healthy limbs encased like sausages in the highest quality Spandex; somehow even their sweat looked expensive. Compare this to a wheezing chubster pushing a disabled wheelchair with a hobbling homeless vet trailing behind; all they needed was someone blowing a fife with bloody rag around their head to make the scene complete.

Dad enlisted their help to push the last half mile to the Promised Land of Power Outlets, but they declined, saying that they were on a schedule and had to get back to their respective cars. They reminded dad of the Pharisees of the New Testament who averted their eyes from the wounded man in the ditch.

Self-entitled douche bags is what they reminded me of, but I’m just a dog, so what do I know?

So when dad eventually got the wheelchair situation squared away, he continued on the bike, albeit at a much slower pace than before; the needle wasn’t just on empty, the engine was running on fumes. And who should he encounter at the parking lot except the Pharisees enjoying a cold one from the back of their posh SUV? The right to remain silent is not always matched by the ability, and dad was a bit more vocal than even he is customarily. One of these days, I’m absolutely positive that he is going to get his butt whipped;

But today was not that day.

Already the symptoms of heat exhaustion were setting up shop: cramping, combativeness, blurred vision, none of these good signs when your still ten miles away from your vehicle. The hand giving is always higher than the hand receiving, and it was dad’s turn to swallow his pride and ask for help.

So he called mom.

As usual, she leaped into action, and drove to where dad was laid out in the shade waiting for the Calvary to arrive. After an emergency pit stop at the Nascar of fast food outlets(Sonic; go fast, turn left), dad was sufficiently revived to drive his own car home. Before they left the blistering parking lot,they spotted a paraplegic athlete attempting to load his recumbent bicycle onto the back of his own vehicle; it turned out that the man was an ex-police officer who had been injured in a car crash, and now does motivational speaking to encourage others that are in his situation as well.

The conversation turned towards the necessity to always be willing to offer assistance when possible, but just as important, to eventually be humble enough to accept it from others when they are in position to extend it themselves.

There are those rare people who function like human magnets, who are individually so attractive – or repellent, depending on the situation – that a considerable amount more seems to happen to them, and likewise, their presence in a certain place makes more seem to happen around them. They’re magical people. They have special power; this was one of those guys. I hope to meet this man myself someday, as I think that we could share some stories concerning overcoming adversity.

We all have stories, just as you do. Ways in which others have touched us, helped us, pushed us. Lots of stories, big and small. They all add up. Over a lifetime it all adds up. That’s why we’re here…

And we all know, it’s all about the stories.