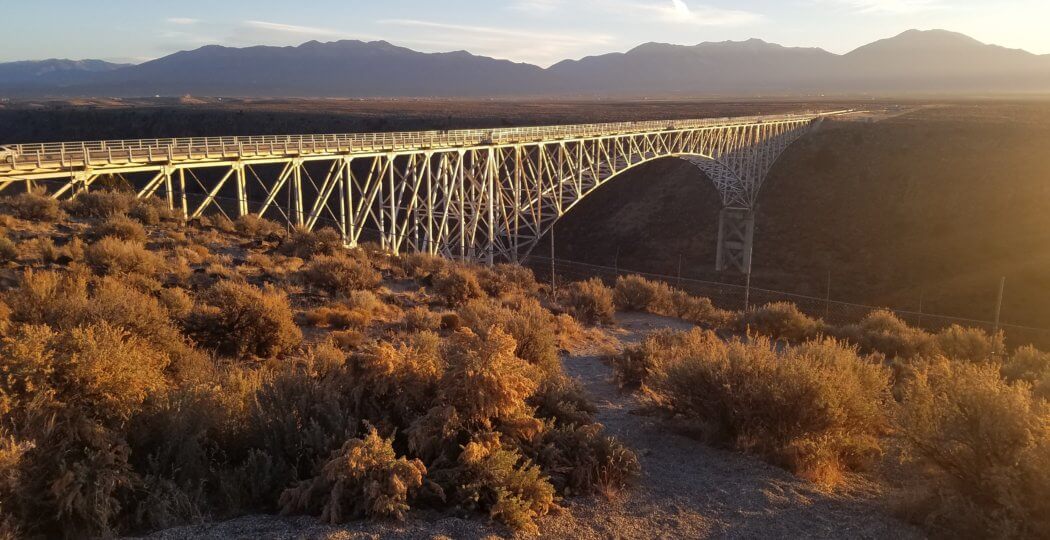 The highway from Tres Piedras to Taos is as straight as a string, both sides of the road densely populated by sagebrush and little else. The only sign of habitation, human or otherwise(after all, this IS New Mexico), is the occasional “Earth Ship” set way back in the scrub.

Earthships are structures that resemble alien spacecraft, hobbit dwellings, or something you might envision in a Mad Max movie. Some use stacks of discarded tires in their construction, serving to block the hot or cold winds rushing down from thd distant mountains, others employing old wine bottles embedded in the adobe walls to allow ambient light to enter, all different but very alike only in their Dali-esque surrealism.

They appear to be random works of art in the desert, but are actually homes built to not only withstand the extremes of the area, but to thrive on it, relying on solar, wind, and geothermal energy to provide what little power they need to survive.

The road gradually drops as it approaches the Rio Grande Gorge, a bridge soaring eight hundred feet above the river rapids crashing far below. Local craftsmen set up along the roadside, displaying their wares to the pasty tourists coming to marvel at the beauty and the horrors of the area. For along with the opportunity to see the spectacle of the vertical canyon walls dotted with bighorn sheep, the bridge has also gained notoriety as a popular suicide location; eight hundred feet straight down into the rocky Rio Grande, there won’t be an opportunity to change one’s mind and make a call to 911 to reverse the damage with a quick trip to the ER. The highway department has went to the effort to place suicide prevention call boxes at each end of the bridge, as well as in the middle, although I doubt if someone has driven that far determined to take the Last Leap, a crackly call to the drive-through is going to do little to change their minds.

Charlie and I have a secluded camping spot hidden in this area, with hot springs tucked into the riverbank far below, the perfect place to get cleaned up after a few days in the saddle. A long soak in 100° water, followed by a VERY quick dip into the icy Rio Grande will cure what ails ya, while at the same time, “shrivelin’ yer pod”, as Gus said in The Gospel of Lonesome Dove.

This mixture of surrealism and stark reality, life and potential death, beauty and abrasive nature, makes this area one of my favorite places on earth.

I envision ancient Judea as resembling this semi-barren wasteland. Charlie and I were crossing it last week when we spotted a lone hitchhiker heading towards the east. Tall and rangy, with a thick beard and a mass of tangled hair, he was not the kind of character that one would go looking for if one was looking for a traveling companion. As I passed him on the deserted road, the thought flashed into my mind:

“That’s what Jesus probably looked like to the scribes and the Pharisees”.

Besides, if, at 55, I haven’t gotten to the point that I can deal with a sassy bandit should the need arise, I might as well go ahead and cash in my big boy britches for a pair of Depends and spend the rest of my life watching Wheel of Fortune from the relative safety of my recliner.

So I stopped; you knew I would. As Abraham Lincoln’s dusty doppelganger jogged up to the car, strangely Charlie remained quiet, instead of charking her goofy head off as she is wont to do. She gave him a good sniffing as he folded his angular frame into the small Subaru, and then she promptly went back to sleep.

What an enjoyable trip; I haven’t laughed that hard in years to hear of his efforts to ensure that his multiple cats engaged in their potty habits further from his trailer in the desert. He would take note of where the cats had hunkered, then cover that spot with flat stones, gradually moving the stones farther from his home. He noticed that the stones caused the ground to retain the moisture, so he started piling stones at the bases of his trees and vegetable plants, and as a result, had a much better yield than others in the area, living with the earth, rather than at it.

During one particularly dry period, he said that he had been praying for rain, when it occurred to him to stop praying, and instead give thanks for the moisture he already had. This being Taos, I started to ask him to what particular diety had he been praying, but then it occurred to me that, at least right then, it didn’t matter; he obviously had his faith, and I have mine. Why not concentrate on what connected us, instead of what seperated us, or why even assume that anything separated us at all?

We parted ways at the bridge; I never caught his name, and he asked that I not take his picture. As he loped off towards the east, it felt like I had been given a glimpse into the past, if not a picture of Jesus, maybe of John the Baptist? Both were men of the people, rough, ordinary men, very unlike the prissy characters in lilly-white robes and feathered hairdos that inhabit popular perception. This perception was probably influenced by Renaissance artists who no doubt realized, consciously or subconciously, that their commissions were in direct relation to how closely they could make the Saviour resemble their own financial benefactors. Ever see a medieval painting of a Hispanic, a Nubian, a Arabic Jesus? Me neither, as there was no money in it.

And the bridge? What is a bridge but a way to cross a divide, a “repairer of the breech”? The greater the division, the more impressive the bridge must be, to withstand the extremes of the elements to which it is always exposed.

“Repairer of the breech”; I really like the sound of that. This hectic holiday season, when sometimes bitter memories and divisions arise, let your gift to others, and to yourself, to be that repairer.