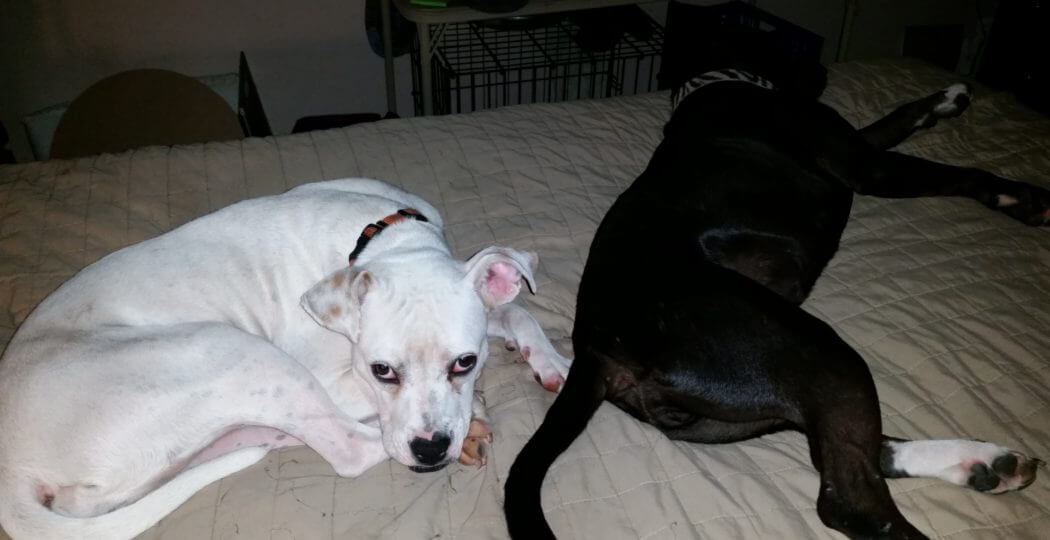 Dad here; it’s been a year since Stevie’s departure. I had thought of just reposting her earlier accounts, but somehow it seems to me like she deserves a better effort on my part.

June 2015; Summers in Arkansas can be brutal, especially for animals unaccustomed to the oppressive heat and stupidity. I was making one of my routine passes through the area where Charlie’ crate was abandoned when I first spotted Stevie, merely a flash of white disappearing into a thicket. The area is a swampy, desolate place, smelling of brackish backwater and populated with enough water moccasins to keep things interesting, so I dared not venture too far back into the slough.

As I was soon leaving on a Colorado trip with Zach, I had no opportunity to see her again until I returned in July when I would catch an occasional glimpse of the elusive girl; she made it much more difficult as she expanded her range quite a bit, but always seemed to return to the old bridge. I began leaving food for her, but unfortunately some other well-meaning but ham-fisted soul did as well, and it appeared that he wasn’t as patient and evidently tried to grab her, as she became increasingly more skittish; you can’t just go grabbing a pretty girl.

After weeks of failed attempts, a local vet offered a sedative to put in her food, but Stevie proved to be remarkably unsuspectable to narcotics, so I took it my self(just kidding). One day I remembered an old Finnish proverb, “a humble hunter gets the bird”, so I lay down on the hot pavement and started fiddling with my phone. I have wonder as to the thoughts of passing cars, but I might note that absolutely no one stopped. I was watching a YouTube video of Stevie Ray Vaughn, (RIP, SRV), when I noticed Stevie had krept within reach almost like she was wanting to be caught, and the rest is history.

She was completely infested with ticks, including a magnificent specimen hanging from her neck, so swollen that I initially thought it was a dog tag. Alex spent the better part of the day picking them off of her one by one as not to alarm her with a dip, and when they were done, Stevie was a new girl, almost unrecognizable in her demeanor. She quickly became the Yin to Charlie’s Yang; even though though they would tussle and fight for hours, Stevie never lost her air of gravity and humility, and if Charlie ever reads this, I’ll deny it, but Stevie could have ultimately had her own voice; she was that special.

Then on a Saturday in December, she started moving slowly, almost like she had stomach cramps. I feared poison, but had no idea where that she could have encountered it, so when she appeared to be fully recovered, it was back to the high octane lifestyle of the Casa. Then the next Saturday afternoon, the same symptoms; her labored breathing keeping us awake and checking on her off and on through the night. Again, everything seemed to ease towards morning, and I was working on a post when Stevie walked to the bed, looked at me, licked my hand and fell over; two or three kicks and it was over. Over the years, I have seen many dogs, and humans for that matter, pass away, but never have I seen one go so peaceably, almost like she was easing my mind instead of me easing hers. To this day, I’m not sure what caused her passing, but I suspect the “bloat”; as I understand it, intestinal torsion occurring in broad chested dogs. We’ll never know, and I guess it really doesn’t matter; what does matter is that she left her mark on all those that met or even heard of her.

I buried her out back. The other dogs cavorted around like usual, except for Charlie, who seemed uncharacteristically subdued and stayed close by. We made the long trek back your the Casa, dragging the shovel and rake behind us; I remember the day being beautiful, but the atmosphere was decidedly not.

As this page was started as a refuge from the negative crap that permeates the Web, I thought long and hard about not mentioning Stevie’s passing here, but are we not siblings? And since when does dad flinch from sharing all the news that affects the rest of the family? As it turns out, the news of her passing prompted more responses than any other since the beginning of Charlie’s story, all for a dog that had only inhabited the Casa for a few short months. This is why the month of December will always feature a rainbow on the calendar in Stevie’s memory.

Contemplate this when you feel like your own time on this planet is short or without meaning; as she went frolicking through life, I’m sure that the janky-eyed girl had no idea the affect she was having on others, and neither do you.

Especially during this time of festivity for many, it’s imperative that you consider the affect that you can have on those around you that might be a little less fortunate, or even a lot more lonely.