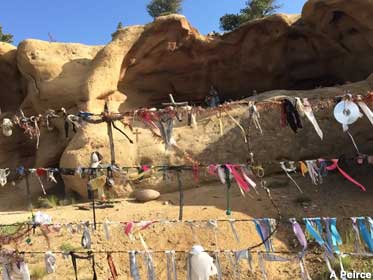 When dad and I head west, we always seem to gravitate towards the northern New Mexico/southern Colorado area. One of our favorite things about the area is the multitude of small shrines that dot the high desert landscape, some beside the roads, others tucked away under a bluff or up an arroyo.

We have to inspect each one and the seemingly random gifts and memorials that seem to always fill them. A sun-bleached hat, extinguished candles, a random shoe, a child’s toy, all mute testimony to a significant milestone on the contributor’s journey.

Mom is always apprehensive of our tendency to check out these places, but dad and I have perfectly clear consciences on the matter; if our intentions are pure and our actions respectful, why should we feel guilty? It’s our way of honoring the memory of a people way may never meet.

Which brings us to the latest potential rescue dog we have encountered; she’s still out there, refusing to conform. Mom took some food to her this afternoon, and actually got a hand on her, but knows much better than to grab, which unfortunately is most people’s response. The problem with this particlar vagabond is that so many other people are evidently attempting to capture her as well, using food as an enticement, that she’s actually getting a bit of a potbelly.

When dad went out there tonight to check on her,she was nowhere to be found, but evidence of many offerings was; containers of food, some fresh, some bloated like soggy brown sponges by the recent rain. The spot where she lays in the weeds actually contained a brand new flea collar, which made little sense, but hey, at least someone’s trying.

The ragged containers scattered about the roadside reminded of the shrines of New Mexico; what may look like sun bleached trash to some is actually a testament to someone attempting to make a difference. Even if it hampers our efforts to catch the skittish girl, at least other people are trying, and in a world that the media would have you believe is full of evil, I can use all the affirmation to the contrary I can get.

How’s THAT for a run-on sentence?

Besides, who says we are meant to be the ones to catch her in the first place? What if she were placed in our paths as so many have been, as a test of our willingness to take on a burden we would just as soon not have to mess with? But it always seems to work out, we have a blast in the process, and down the road we go.

The Book says ” Be not forgetful to entertain strangers: for thereby some have entertained angels unawares”. I personally think that this definitely includes dogs, or any other being in need of assistance for that matter; we just tend to be more than a bit biased towards that of the canine persuasion.

So if we catch her, great; if someone else does, that’s even better, as why should we hog all the blessings that inevitably come along with serving others unselfishly?

…but I still think that we will, ’cause that’s how we roll!