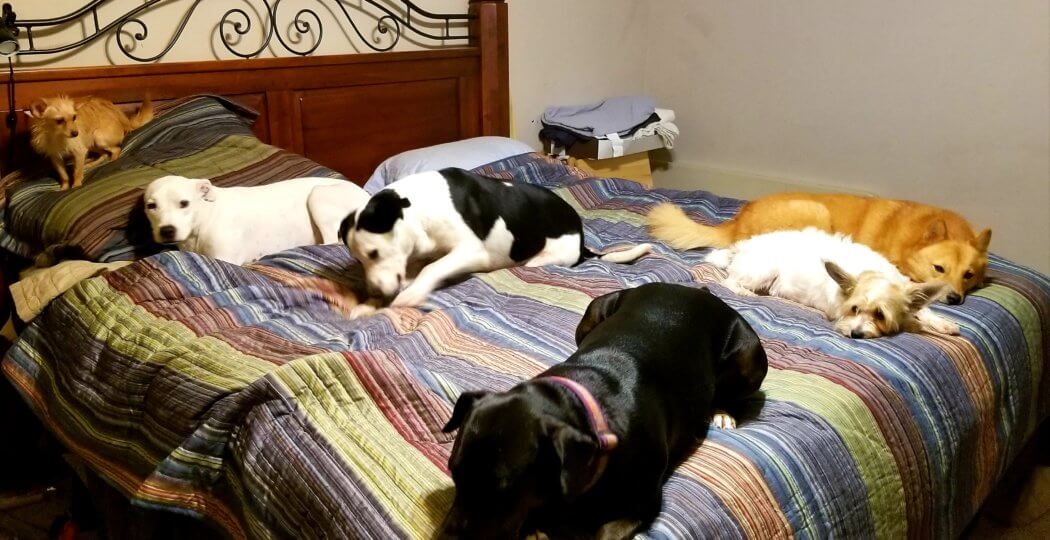 Dad here; life never seems to slow down at the Casa. Time advances like a leaf floating in the current, seeming to be unmoving in the distance, then speeding up as it approaches only to vanish beneath your bow, never to be seen again. Such is the parade of characters that have inhabited this madhouse over the years; just since Charlie started this adventure, we have seen the passing of Stevie, Max, and Bull Taco due to unusual or even violent means, and Angel and Echo to more timely circumstances.

You would think that with the passing of this many characters, our numbers would become somewhat more manageable, but I’d you did think that, you would be wrong. Just like work always expands to fill the time allotted, so do the dogs that seem to find the Casa. So here is an update on the current cast of characters, and how they came to inhabit the padded cells of the Casa del Whackos.

Ajax: I found this wire-haired goober at the Humane Society, one of a litter of six hyper little spazoids; he deserves a best actor Oscar for his role as “chillest puppy of the bunch”,only to reveal his true nature as a hyperactive spawn of Beelzebub. He has a jealous streak a mile wide, and the mere mention of another dog’s name causes him to magically appear directly in my face, as if he can wipe that name from between my lips with a swipe of his anteater-like tongue.

Marco Polo: a long-haired chihuahua, his previous owner passed away from Alzheimers; she would forget to eat, and as a result, forget to feed her dog. My “friend” Betsy told me of a dog who “needs a hero”; Bull had just died, and I was a pushover, thought Marcus would be my dog. I was wrong. The ungrateful little hairball took up with mom, and that’s how it’s been ever since, at least until he hears the jingle of keys, then its every dog for himself.

Mia: a Finnish Spitz, and also mom’s girl from day one. She is the matriarch of the Casa, and as long as she’s around, we will never have to spend a dime on Qtips, as all ear cleaning activities are administered by her probing tongue. This is not just human ears, but canine as well; we all have a purpose, and hers obviously involves the eradication of earwax.

Claire Bear: a boxer mix, Claire is not technically ours, but a long term foster from Nova Star Rescue. She was so traumatized when we brought her home that she wouldn’t even come out of her crate, now she’s the heir-apparent to Stevie’s title as the sweetest natured inmate of the Casa and the best/worst sleeping companion, as she can’t seem to get close enough to me at night.

Domino: another pit/boxer mix, and also another foster that has taken up residence at the Casa. She just showed up one day with a litter of pups and started hanging around; the pups were adopted out by various neighbors, and mom took it upon herself to get Domino speurterd before she could resume her promiscuous lifestyle(Domino, not mom). Mom kept the black and white girl stay inside during her convalescence, and it just kind of “took”. She has turned into a great dog and foil to Charlie’s energy, but we need to find her a permanent home.

And then there’s Charlie Bravo: what can I say, other than that she’s a royal pain in the butt, as headstrong as an ox, and I can’t imagine life without her. Her loyalty knows no bounds, and that sometimes has its drawbacks, as breathing is difficult when this big black tsunami has me pinned flat on my back, and is engaged in a prolonged licking fit. After meeting her for the first time, a long time follower of this page said of her, “I used to envy you, now I pity you”, and that pretty much sums her up. She is the epitome of “charke diem”; every day out of the crate is a good day; sometimes people are as bit offended upon making her acquaintance, as she is so fixated on the things that fascinate her: me, motorcycles, and whatever else seizes her fancy at that particular moment.

There you have it; when you figure in the other characters at the asylum, i.e. Miss Ellie, the hummingbirds, etc, it can get a little hectic, but that’s what makes the Casa the Casa.

It’s always a party; stop by and participate someday!