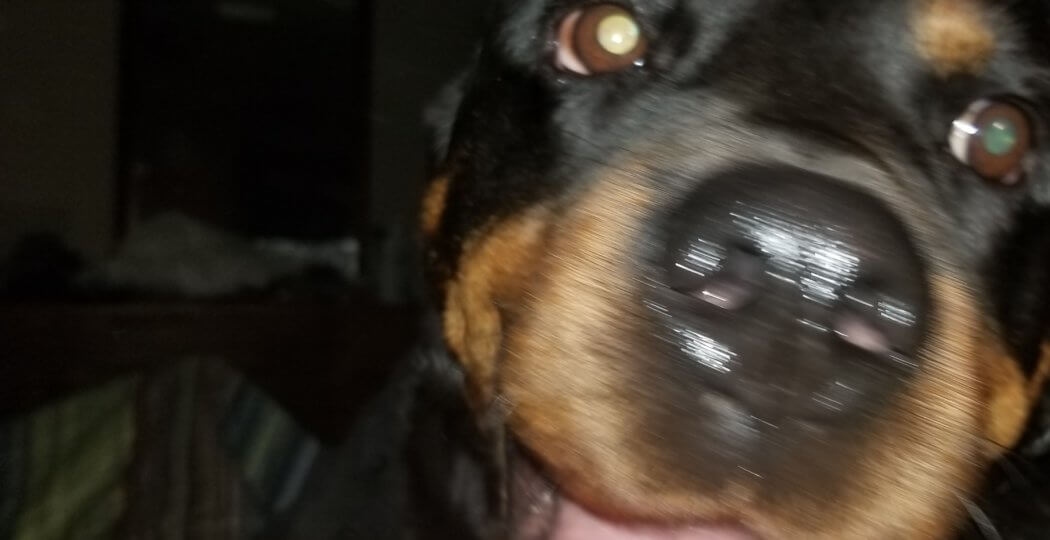 The Casa del Whackos is set to experience it’s first hard freeze tonight, but we aren’t too concerned; have you ever heard the term, “three dog night”? That’s from the old days up in the Ozarks when the chill inside the cabin was measured by how many dogs one had to pile on the bed to sleep warmly; of course, even the hottest nights at the Casa has the capability to be a three, maybe even five, dog night, and it appears to have just become a great deal more claustrophobic.

Remember the Rottweiler from down the street? Her story surfaced on this page a while back when we found her chained to a tree in the dead of summer, and her rambunctious pups had knocked over her water. Then she appeared again during the winter when the temps dropped into the low teens, and mom dognapped the big doofus, bringing all 120 pounds of her home to the Casa for a few nights until we could get in touch with her absent-minded owner.

Well, yesterday, mom was coming home from work to find the Rottie’s house surrounded by the local constabulary, the the owner of the establishment confined to the back of a squad car and evidently headed for an extended stay in Cell Block B of the Heartbreak Hotel. So what does mom do? She volunteers to care for Roxie the Oxy during Pablo Escobar’s state-enforced abscence, the man gave his mute assent from the confines of Ye Olde Paddy Wagon, and now we have a new inmate at the Casa.

I’m convinced that Roxie is not purely canine, but is the result of an illicit relationship involving a water buffalo and a musk ox; she makes Claire and I look like chihuahuas in comparison. She must be a blissfully absent minded sort, as it appears that she has misplaced her tail. This doesn’t stop her from trying to wag it, but the result is the unsettling image of a big hairy butt twerking around the house, following mom like a four-legged Kardashian, as she(mom, not Roxie) prepares for today’s arrival of HER mom, hereafter known as “Oba”, the Japanese word for “grandmother”, for an extended stay at the Casa.

Whoa… back up there; what is that you just said? Oba is going to be HERE? TODAY? For an “extended” stay? The same Okinawan micro-granny, a whopping 4’9″ of Occidental germaphobe that believes that a dog’s place is anywhere she is not? And mom just added a sixth inmate to the Casa the day before she arrives? An inmate that, when she goes into the back yard to hunker, appears to be giving birth to the poop equivalent of Micro Polo? Have you thought this through, or given it any thought at all?

The ancient Chinese have a curse: “may you live in interesting times”, and I have a feeling that things are going to be “interesting”, as Oba probably already thinks that we live in an overcrowded canine petri dish. It’s a good thing that Miss Ellie is up and running again, as it appears that dad and I will be spending a good bit of time in self-imposed exile from the Casa; stay tuned, as future posts may be originating from various parts unknown.

I get it; it’s always a party at the Casa, but this is getting ridiculous.