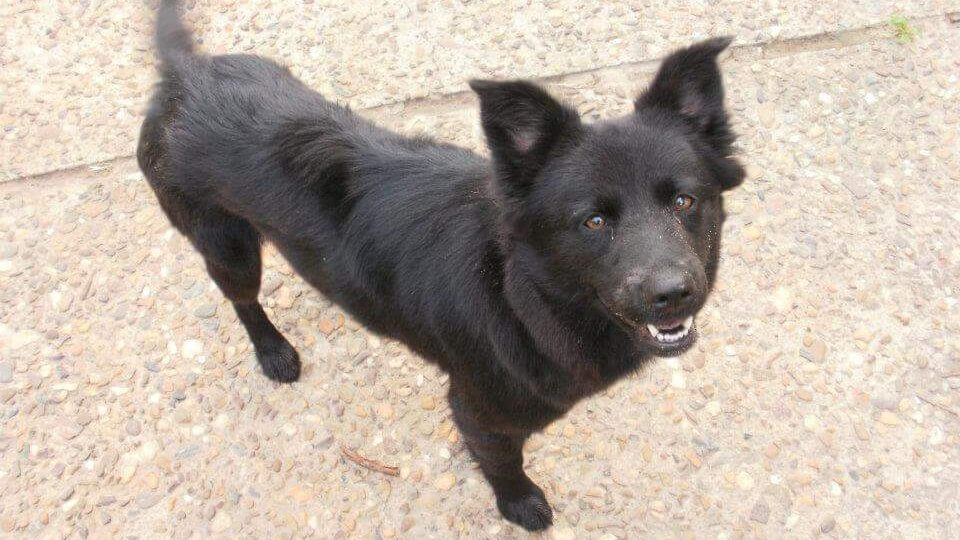 Dad here; a few years ago, a “friend” used to spend his lunch hour fishing at a secluded spot by the Arkansas River. He came back telling me of a friendly black dog who had apparently been abandoned, and wanted me to go pick it up and keep it “just for the weekend”; yeah, right. I did take her some food, but we didn’t have room at the Casa; the Unreasonable Bug had not yet bit.

Or so I thought.

What I didn’t put together until just today was that this girl had been dumped in the same general area where we found Charlie, Stevie, Beau, et al, some years later.

Anyway, mom, Alex and I went to see a movie that night. As we walked out, a huge line of thunderstorms was approaching from the west, and all I could think about was that goofy black dog down by the river. And this is NOT the place you want to be heading on a Friday night, the actual name of the boat ramp was Outlaw Landing, named by the locals due to the nefarious activities that always seem to be occurring there. The area was so bad that the police actually shut it down, and the road was eventually bulldozed.

But there we went, bag of dog food on hip, can of Deep Woods Off and pistol in pocket. As our headlights illuminated the desolate scene, the clouds of mosquitos parted to reveal the black girl curled up in a hole, motionless except for what would become her trademark:

We loaded her up into the back of the car, and she turned out to be the happiest dog that has ever resided at the Casa; even when she was in deep doo doo with mom for eating the chickens, her tail could not stop wagging. Although it was years ago that she spent a short time as an inmate, she is still regarded as one of the most remarkable dogs that ever graced the Casa del Whackos.

I’m sure you’re thinking “but what does this have to do with Bull Taco?” Well, since you asked, I’ll tell you…

There are some dogs that have made their mark over the passage of years, dogs like Uki the Wonder Dog, Beebe King, Max E. Million. And then there are a select few like Stevie Mae and Skinny that are so special that, like a shooting star, they make an indelible impression in a very short time.

I didn’t even think that I particularly liked Chihuahuas until the slick-headed little bandito made the Casa his lair, now I can’t quit thinking about getting another. Too soon? Maybe, maybe not; as you know, things have a,strange way of working out around here.

And as to the dogs that brought about Max and Bull’s demise, trust me when I tell you that the situation is being taken care of in the proper manner. I’m sure that some would like to hear all the details, but I promise you, you do not. All I will tell you is that Thursday afternoon, I discovered that this old fat man can still cover some real estate; I was barefoot when I first heard Bull’s screams, and while I don’t remember touching the ground, the bottoms of my feet bear testimony that I evidently did.

A million charks for all the kind words, and a special thanks to my buddy Kyle for volunteering to post the bad news as I physically could not.