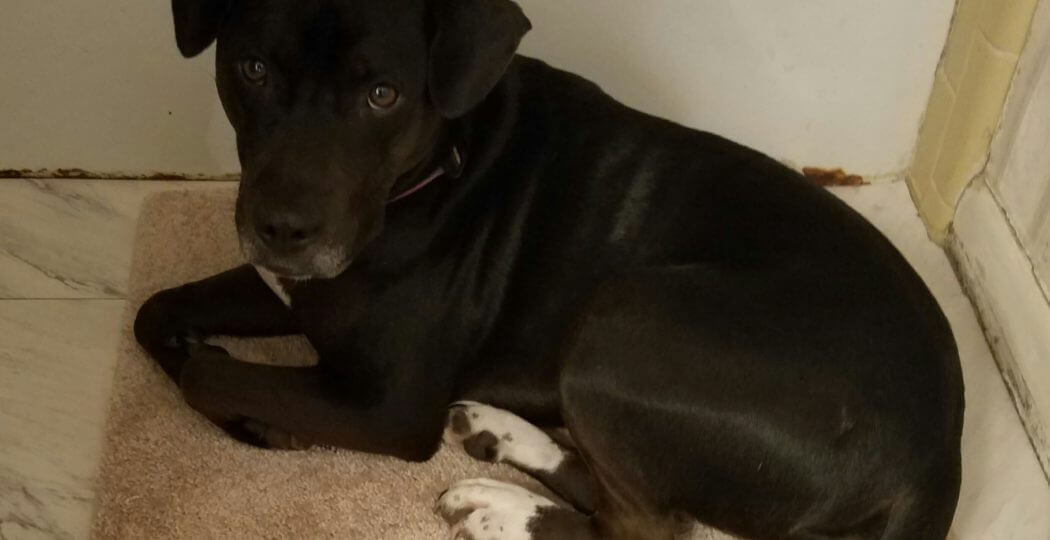 Dad recently finished the bathroom floor before going back to work; he has the best of intentions but his actual handiwork is sometimes suspect. This particular project started well, but unded up looking like an enraged toddler had randomly thrown his blocks on the floor; oh well, a healthy dose of caulk covers a vast quantity of ineptitude.

Like everything else at the Casa, I view the project as being exclusively for my benefit, as I have discovered that the porcelain throne is one place that dad is remarkably vulnerable. No matter how he howls and protests my intrusion, I continue to chowl and flounce about in an area not conducive to the gyrations even one cannonball of a she dog, let alone shared with a hunkering hobbit desperately trying to concentrate on the business at hand.

I have a peculiar voice that I use when I’m being particularly demanding of dad’s attention, a “Chowl”. Just like a Chark is a Charlie bark, a Chowl is a Charlie yowl, what it lacks in volume it more than compensates with annoyance. My plaintive tones echo off of the porcelain tile in a demand for only doG knows what, but figuring out what I want is dad’s job, not mine; I would rather work myself into in a frenzy of intensely personal hygiene, then transfer this devotion to dad’s face while mom studiously ignores(from the other room) his pleas for rescue.

Then,once in a blue moon, I just want to chill at dad’s feet. It’s at time like this that I revert to a shade of my former self, curling my paws and wrapping my tail in an unconscious effort to conform myself to the now only imaginary dimensions of my former crate. But then I catch myself…

That was then, this is now. Although it’s essential to remember from whence I came, it’s much more important to remember where I’m going! There’s a reason the view through the windshield of a car is many times larger than that of rear view mirrors, and the perspective from astride the saddle of a motorcycle is even more incredible. Driving a car is like watching a movie, but riding a motorcycle? I’m the star! The lack of protection from the elements is vastly offset by the freedom to experience those elements; the harder that dad twists the throttle, that harder those elements pummel us, but that’s what living is all about, isn’t it?

Also, a thousand thanks for the help with Bultaco’s medical expenses; we received not just one but two sets of doggy stairs, so now neither bed is off limits to the gimped-up Piquito Bandito. He sometimes still refuses to use them, electing instead to stand shivering by the bed in an Oscar-worthy performance designed to make dad fold up like a cheap suitcase and hoist him(Bull, not dad) up to the Promised Land of Life Beneath the Covers.