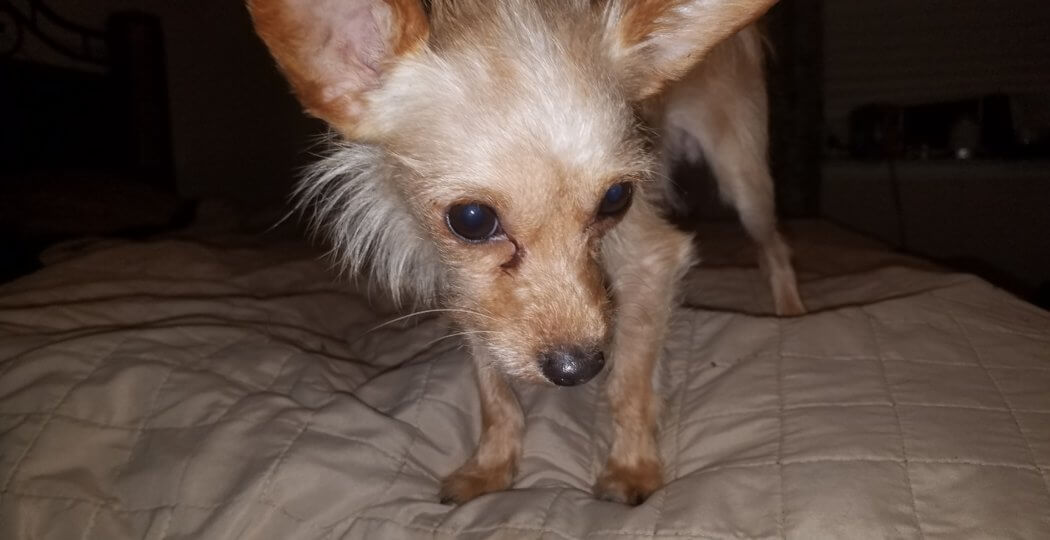 Well, I guess everybody knows it by now; dad’s selective social conscience, known as his sucker-bone, has struck again and there is a now a new inmate at the Casa del Whackos. Dad was told that this dog needed a hero, what he wasn’t told was that he needed serious psychotherapy( the dog, not dad; wait, that’s debatable… scratch that).

Don Marco checked into the Casa a tiny mass of greasy hair and frail bones; we know very little of his previous life at this time, except that a proper diet and social interaction where NOT part of his daily regimen. He was gimping a bit when he first arrived, as he had been recently “fixed”, or as dad put it, “delivered two nuggets short of a Happy Meal”. Although his papers claim that he weighed four pounds at time of adoption, we dogs all agree that, judging from the size of his , um, “package”, he must have weighed at least twice that before his operation. If Don Marcos ever returns to his pre-Casa smuggling lifetyle, he now has the perfect place to stash any contraband, if you know what I’m saying. Mom says he should have been named Slugger, dad opted for Wun Hung Lo.

Anyway, as he is slowly regaining his strength, he has surely recovered his swagger, which is why he is not putting on weight as quickly as we would like. When your out go exceeds your income, then your upkeep will be your down fall, and the same is true with Don Marcos. Just because they took his bullets doesn’t mean that he’s done playing with his gun, and any excess caloric intake he may be experiencing is being exceeded ten times over by his “pelvic aerobics”.

Ajax was the first partaker of the fruits of the Don’s misguided attentions, then Mia; while Ajax looked alarmed and confused at being assaulted by a Tribble, Mia just looked bored, “is that all you got, little man?”. It was all fun and games until he turned his attentions towards me; I’m the Queen, and the Queen don’t play dat, yo.

So even though his equipment was taken, the attitude is still there, and Marco remains a mincing category 5 hormone hurricane advancing up east coast of the Casa del Whackos. Mandatory evacuations have been ordered in preparation of his making landfall, but nothing is safe from his incessant pummeling. Mom is even trying to design a device to harness the motion of those mighty loins to a generator so that we can use this power for the good and provide electricity to the those less fortunate.

So as the Queen, I’ve warned him to tone it down a notch, as he’s going to bunch himself to death if he’s not careful; he has the rest of his life to molest the laundry, stuffed animals, lawnmower tires, barbecue grills, door to door religious proselytizers, etc, but I fear that he is heeding my advice, as, if anything, his fervor seems to have increased.

Then, as warned, disaster struck.

As dad let me out back to to do my “business”, the pale light of the rising sun was dispersing the whisps of fog only to reveal the form of Don Marco De La Polo laying motionless in the dewy grass. My worst fears were confirmed when I saw, wheeling in the sky above above him, a squadron a buzzards in search of a small but easy meal.

As I dad went to get the shovel, I trudged out to pay my last respects to another young life cut short by lust. As I approached, I was shocked to see Don Marco’s left eye crack open just a bit, sneaking a peek toward the sky, and the he hissed at me through clenched lips:

“Get back in the house; I think they’re getting closer!”