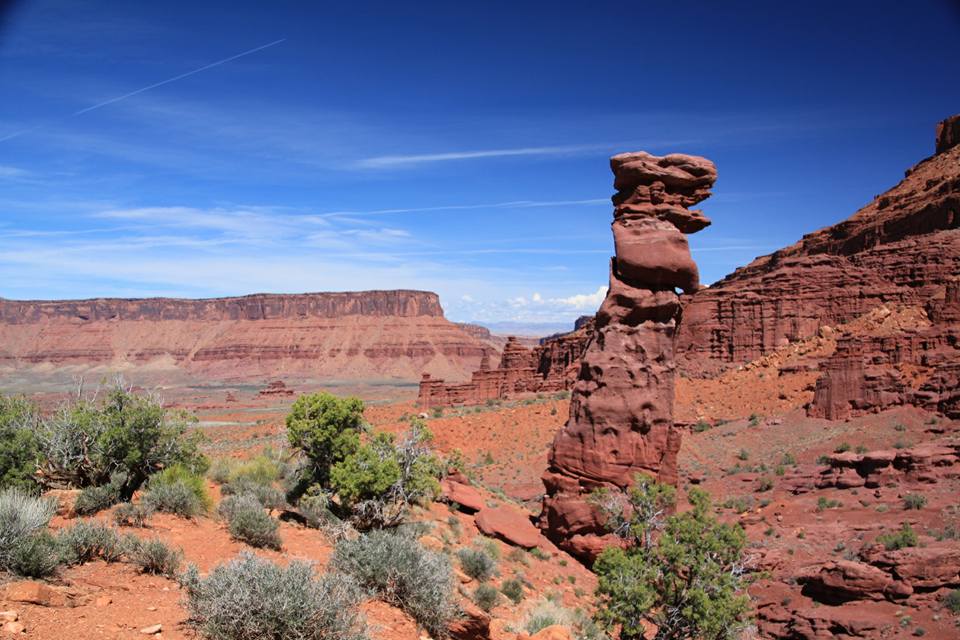 On our last day in Moab before bending the road back east, dad just HAD to cram one more hike in, this one in to the Fisher Towers area.

There are pros and cons to every situation; when it comes to hiking on Utah’s “slickrock”, there is unlimited traction, as it’s akin to walking on sandpaper. The negative is that it’s also very abrasive, and this, coupled with the heat and lack of humidity, has worn down my pads until they look like pink pencil erasers on my feet. It’s odd that, back home, dad can find many excuses to eat, but on the road, will go all day long on just a cup of coffee; this also can be a negative, as those around him (me, in this case ) sometimes suffer the consequences. It makes me wonder how much perceived “hunger” is merely an inadequate way of dealing with stress, and is affected much more by the contents of our heads and hearts than the condition of our stomachs?

And a word on stress; it’s not the sudden, catastrophic events that do the most harm to our psyches, but it’s the slow, steady, persistent, drip, drip, drip of Chinese water torture that wears away at the stone of our lives. But consider this; it’s this type of erosion in nature that leaves behind the beautiful arches and spires that make Moab and the mountains the spectacular places they are today. Anyway, here we go again, marching into the wilderness in one more attempt to put off our return to domesticity just a bit longer. The heat began to build across the lunar landscape, and I was beginning to seriously founder, taking advantage of every drop of shade to flop down and stretch out my belly on the slightly cooler surface. We finally reached the base of the towers, dad clicking away on the Canon like a hyperactive stenographer, and me taking a micro siesta, when what should appear on the trail than a gaggle of sprightly octegenarians?

Dad’s usual response to this is to jump up and get moving, as who wants to get stuck behind a slower moving group, but that was the old dad; this new dad decided to fall in behind, as obviously this was a group that had learned a few things over the years, and you never know what you will learn if you take the time to listen. I guess this is why we were created with two ears and one mouth, to listen twice as much as we talk, although dad tends to skew that balance when his yapper kicks into overdrive. Despite the heat and the distance already covered, the group settled into a serious pace, their walking sticks tapping a staccato rythym on the sandstone. As we know many people of advanced age that would no more attempt something of this nature than to attempt doing their own eye surgery with a butter knife, dad just had to ask: what’s your secret?

No secrets here; just never stop moving, and surround yourself with positive people; you see, there is a time for solitude, but this bunch wasn’t hiking alone, the collective energy of the group serving to inspire those that may have been about to falter. As they were that group that day, we are that group now, a group of sometimes misfits drawing strength from each other from around the globe, all connected by the improbable story of a goofy dog; you
can’t quit, as there are others counting on you.

We be of one blood, ye and I