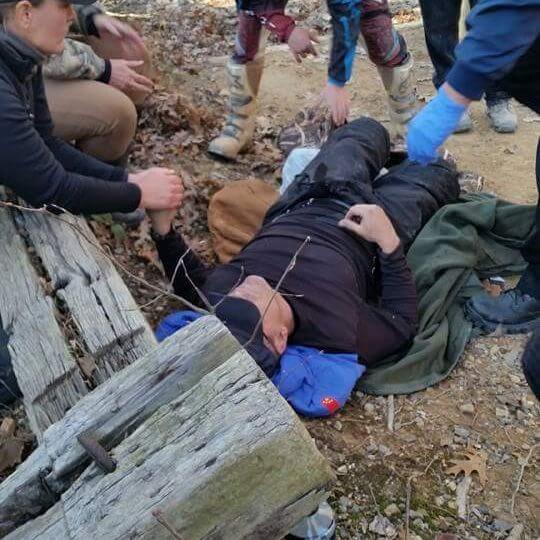 Charlie’s out like a light from an apparent tryptophan overdose. Before anyone starts freaking out and turns me in to the ASPCA, tryptophan is the ingredient in turkey that causes drowsiness, and it appears that the Charles is remarkably susceptible to its properties.

As promised, here’s the story of the accident that ultimately led us to Charlie. It’s a long tale, with many twists and turns, but bear with me; a lot of of miracles happened in a very short time to bring us to where we are today.

Zach and I ride what is commonly known as dual sport motorcycles, or adventure bikes; street legal motorcycles that are also dirt worthy. ADV riders are notorious for loading their bikes down with camping gear and taking them into desolate places under all kind of extreme conditions. If this group of misfits could explain why they do what they do, they probably would quit doing it, but it gets in your blood; a trip across the state becomes a trek across the country, and if you’re incredibly lucky, eventually around the world.

The day after Thanksgiving in 2014, we loaded up the bikes and headed west for a short overnighter into the Ouachita mountains; we hooked up with Bryan, a fellow rider we had met in Moab, UT on a previous excursion. After a cold night under the stars, we saddled up for a day of dirt in one of the most remote areas of Arkansas; everything was perfect. The leaves had reached their peak color, the sun rose high in the sky, chasing the chill from the air as we chased each other down dirt roads which eventually gave way to rugged trails. It was on a long downhill section of such a trail that was so much fun that I just HAD to ride back to the top and run it again; Bryan and Zach wisely waited at the bottom. When I didn’t arrive in a reasonable amount of time, they knew something was amiss.

This particular trail was laced with water bars, mounds of dirt crossing the trail to control erosion; these also serve as great launching pads for a middle aged idiot on a DR650. Even though I wasn’t going THAT fast, it was on the backside of one of these jumps that my front tire landed in a rut, whipsawing the bike to the left and me to the right and off the bike. I landed abdomen first on a recently sawn stump roughly the size of a paint can; I say “landed”, but I actually remember bouncing. I blacked out for a bit, but I think I had recovered enough to sit up by the time Zach got back up the hill to check on me.

The pain was was bad, but not debilitating, and as the impact was to the left side of my stomach and away from any vital organs, or so I thought, we elected to press on. I had no idea that the colon descends down the left side, and I had ruptured mine, the contents of my bowels turning my insides into a toxic waste land. The pain began to gradually build until I couldn’t even see, let alone pilot a bike, so Bryan turned back to retrieve a trailer while Zach and I tried to make it to where we could at least find a cell signal.

Finally, after approximately three hours, I had to say enough is enough. I didn’t want Zach to see me laying on the ground, so I remember slumping over an old split rail fence. The pain was such that I couldn’t even focus my eyes on the GPS to find the next town; we knew that Mena, AR lay approximately ten miles to the west and had a small hospital, so Zach had no choice but to leave me and ride cross country in search of help; only then did I slide off the fence onto the ground.

Words cannot describe the feeling of watching my son’s tail light vanish into the woods, knowing that it could quite possibly be the last time I saw him, or anyone, for that matter. At the same time, I had the peace of knowing that this wasn’t his first rodeo; we had been in some tight spots before and he could keep his cool with the best of them. If there was help to be found, he would find it; he had his job, and I had mine: staying alive until he returned.

I faded in and out of consciousness, then heard people talking; “I think he’s drunk!”. A group of off road vehicles had become lost and had stumbled across me laying on the ground. One of the riders happened to be an ER nurse out of Ft Smith, and upon hearing my symptoms, had the other riders strip their coats and coveralls to cover me. She then lay down beside me to use her warmth to keep my from going into shock; during one time of consciousness, I remember asking her, ” I know you know the signs; am I going to make it?” Her response: “I can’t say, but if you go out again, I need permission to do what I can to resuscitate you”. I’m thinking, “permission? Hell, hook jumper cables to my nipples and shock me back to life if you have to!”.

On a side note; since that day, I have tried my best to find the name of that lady, or anyone else in her group. I have contacted the area ranger station, the local sheriff, state police, etc, to no avail, and I’m usually pretty effective at finding that type of information; it’s like she just vanished. Make of that what you will, but I know what I believe.

Meantime, Zach was making the ride of his life, and actually found a park ranger eight miles away; the ranger had received a snippet of a phone call concerning a rider down in the Ouachitas, but had lost the signal before he could get the particulars of my location. Zach led him to me, and I awoke to the sight and sound of blue gloved snapping fingers in my face, and a voice saying, “stay with me, now! Don’t close your eyes!”

The rest is a pain racked blur; a rumble of a 4wd truck, then the chop of a helicopter, cold air as they wheeled me across the ramp and into the hospital. Someone ripping away at my favorite pair of armored riding pants. Then, buck naked and strapped to an operating table, masked faces and bright lights, then nothing. If this was heaven, I sure didn’t want to be here.