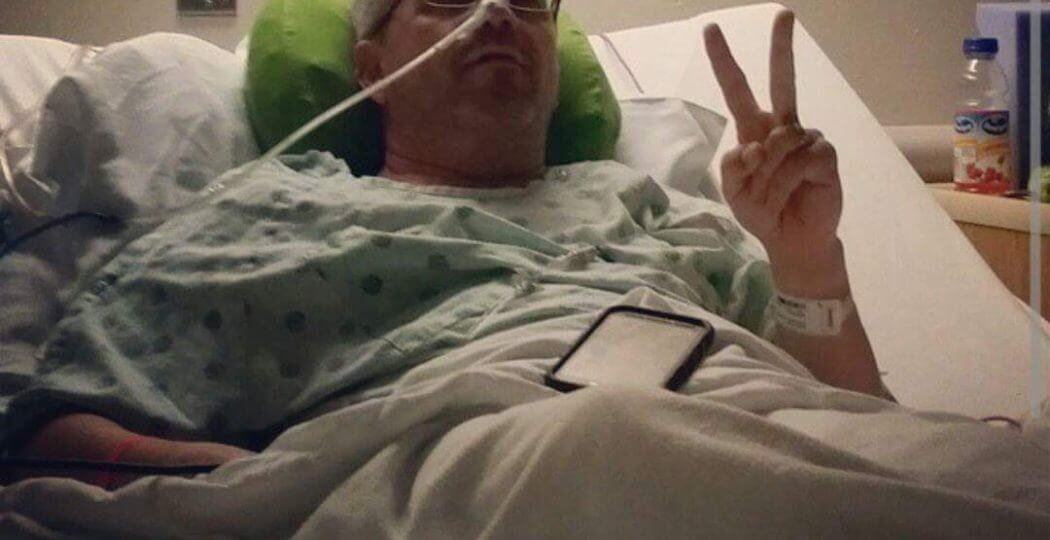 Who are these people, and why are they levering me from one bed to another? And why do I have hoses and tubes inserted into every hole I have, and even into a few that someone has taken the liberty to add? And will the indignities never end? It appears that I’m now the proud owner of a shiny new colostomy bag, attached to my gut like some sort of plastic parasite; if someone won’t do me a huge favor and just go ahead and shoot me, just give me the gun and I’ll do it myself.

I awoke in a level 2 trauma center an hour south of Little Rock; Joann and Alex made it there just as I was coming out of surgery,and Zach made it in from the west with the bikes on Bryan’s trailer. I didn’t know it at the time, but the waiting room was full of friends and family, with Alex directing traffic like a pint sized Napoleon. I won’t go into all of the gory details, but a few do stand out as particularly memorable. One such was when, in the middle of the night, an older nurse was making rounds; I had been incarcerated for three days at that time, and as a result was akin to Lazarus in the Bible as “I stunketh”. The nurse informed me that she was going to give me a bath; when I, shall we say, “expressed my reservations”, she told me, “you gots to be gettin over that!”. She then stood me up, stripped me down, and gave me a scrubbing that was miraculous, especially considering that she left any hide remaining whatsoever. Actually, it was so heavenly that I told her that whenever I got this plethora of tubes removed, she and I were heading for Vegas. When I informed Jo Ann about the encounter the next morning, I was not a little surprised when my wife unreservedly gave her blessing should I ever decide to actually make the trip.

After seven days of such hilarity, they finally sent me home; I could scarcely look at the bag, much less the 9″ gaping incision in my gut that had to be repacked twice daily. I have no idea what I would have done if JoAnn hadn’t stepped up to the plate; to say it was a depressing time is the understatement of the year. Even under much less trying circumstances, I am not a good patient, and for her to put up with my shenanigans qualifies her for immediate sainthood as far as I’m concerned. It was during this time that the infamous “poop on the foot” episode occurred, a story humbling beyond belief at the time but one of my favorites today, although I still can’t believe I still tell it.

So how does all this relate in any way to Charlie? After a few weeks of hiding in a dark house, I had to get out. I had lost so much weight that I could easily hide the bag under my riding gear, so on a cold, rainy day in January, Zach came over and we took the street bikes out for a spin. It was on this ride that we spotted Charlie’s crate; to be honest, we didn’t stop the first time we passed. We had seen a few rabbit hunters in the area, and at first I put the two together. We then switched bikes and made a second pass; it was then that we saw her emaciated condition, and I flashed back to laying on the ground myself, watching Zach’s tail light vanish through the trees. Would we have stopped anyway? Of that I have no doubt, but, by previous experience, we knew that it was “right”. As we were both riding Honda CB motorcycles that fateful day, she named herself Charlie Bravo.

The network of ADV riders across the country is notorious for their dog relays, and it was my initial intention to get Charlie stabilized then adopted out to someone suitable. On a side note, Dash/Takoda Steele’s dad is one such rider, which is how we both came to drive over a thousand miles each to meet in Raton, NM in the dash for Dash relay, another story for another day.

As we needed another dog at the Casa like I need another hole in my head, or elsewhere, I posted Charlie’s story over on ADVrider.com, and, as a result, quickly compiled a list of riders across the country willing to adopt CB. But life is what happens when you’re making other plans, and the goofy girl began to successfully insinuate herself as the Queen of the Casa del Whackos.

And here we are today; on one side, a mountain of debt and a gut full of scars, and on the other side, tipping the scales towards the good, a black dog with one heckuva story.