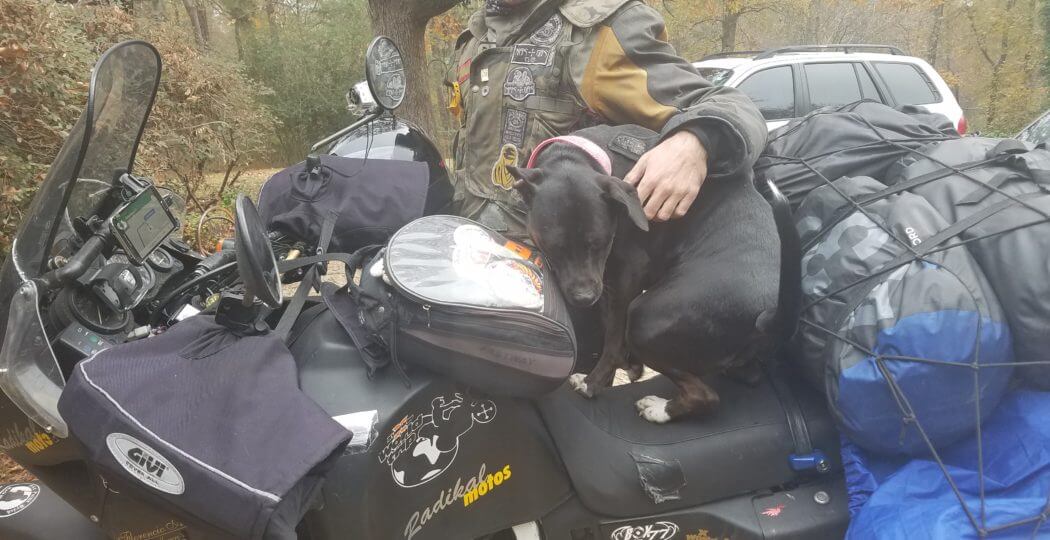 It’s good to be back; I understand why dad felt the need he to post this weekend with it being the anniversary of the bag and all, but really? Sure, he makes a great chauffeur, but he needs to leave the writing to me.

One of the benefits of presiding over the Casa del Whackos is the number of pilgrims we have had the privilege of entertaining, in some ways the descendants of the honorable hobos of yesteryear. Ukraine, Spain, Canada, England, Yanqui, all of them willing to forego the comforts of home for a home on two wheels, at least for a time.

The ranger in Mena expressed disbelief when we told him that we needed to get back to the Casa as we were expecting a traveler from Spain, and it made dad think; why do we trust this type of people?

Dad is no Pollyanna with a saccharine view of society, and we fully realize that there are some bad people out there. First and foremost, people become what you expect of them. Second, this isn’t dad’s first rodeo, and with age comes experience and a certain level of discernment. Third, he has me; I also have a sixth sense about these things, and I’m capable in my own way of defending the perimeter if necessary.

But we have found that when people are on these types of journeys they are in search of something, especially if they are willing to make themselves vulnerable and forego the comforts of a motel to rely on the kindness of a stranger. Could these encounters go bad? Of course, but so far, they have all been life changing experiences for the good. The hand giving is always higher than the hand receiving, but when all parties involved are willing to give, everybody wins.

Sometimes when a visit comes to an end, you just want to stretch the experience as long as you can. Although yesterday was cold and grey, dad called some local riders to escort Xuankar on his journey. He usually communicates in a language I can understand(dad, not Xuankar), but yesterday he started making these bizarre noises, something about leaving me home because it was too cold, blah, blah, blah; as if THAT was going to happen! I AM the Queen, and with rank cometh privilege, one of which is to overule dad’s bad decisions.

We rolled out of town towards Hot Springs, and somehow this trip became different; I’ve ridden many miles on the back of the bike, but the key word there is “ridden”, looking from side to side, barking at squirrels, you know, the good things in life. Yesterday, something clicked, and instead of randomly looking around, I became actively involved. I would find myself looking over his right shoulder when we would dive deep into a hard right-hander, and the same on the left. We soon developed a rythym, a synchronicity if you will; no longer just a ride but more of a cooperative dance.

We said our goodbyes and turned towards home, and it made me reflect on the similarities between the ADV riders and the followers of my page; although one group is predominantly male and the other female, and of all nationalities and political beliefs, both are connected by a common cause. Both are well seasoned and have shown a willingness to suffer, and have suffered, for the things they love. But this suffering hasn’t turned them bitter, but has caused them to embrace even more fiercely the things they love.

In accord with your place on it, the road may be flat and boring or rough and rocky, but it’s always rising towards a new horizon, and soon the difficult sections will be a distant memory.

From the family of Charlie Bravo: Godspeed, Xuankar; we be of one blood, ye and I