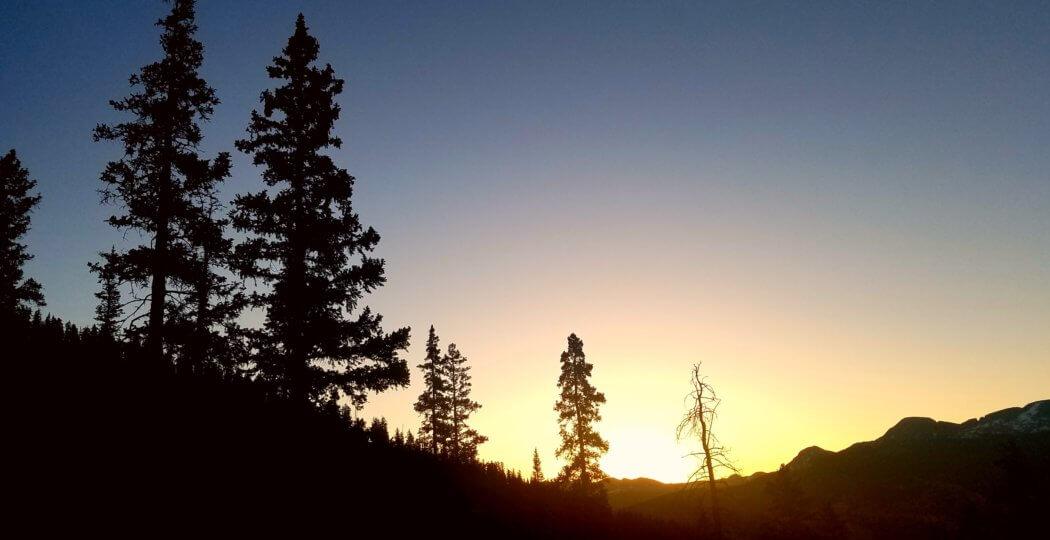 “Two roads diverged in a yellow wood,
And sorry I could not travel both
And be one traveler, long I stood
And looked down one as far as I could”

I awoke before sunrise gasping for air, my gills flexing for oxygen like a fish out of water; what was this devilry all about? How could it be possible to be having a panic attack while camping somewhere as invigorating as the Rocky Mountains?

True, I knew this trip had the potential to be stressful, considering my dad’s condition back home; it seems nothing will make you selfishly consider your own mortality like a major life change in the life of a parent. Then there was the situation involving my friend Craig’s motorcycle accident in Moab, but he HAD ridden it out over twenty five miles of inhospitable terrain, so it was obvious that, with that type of intestinal fortitude at his disposal, I needn’t concern myself with that, so what could so the source of my anxiety be?

Then I remembered: I WAS camping at 11,000 feet, and oxygen is a limited commodity at this altitude, so I rolled out of my blanket, scrubbed my face with some snow left over from last winter, and here we are.

How often do we enhance the drama occurring in our own heads with that of the circumstances that surround us, usually well out of our control?

So now I begin my descent from the mountains towards an unclear future; like most people since the beginning of time, I have always looked for signs and guidance from others to show me direction, disregarding the series of wonderful miracles that have brought me to where I am today. If God Himself choose to grace us with an incredible vision of some sort, laying everything out before us in vivid Technicolor,  how are we to ever trust in the very Faith that we have planted in us in the first place?

Though I am thankful for the pastors, shamans, parents, physical angels of every cloth that are put here to guide us, ultimately we alone are responsible for time spent on this earth. I came into this world naked and screaming, or so I hear, and I genuinely hope to leave it the same manner; it’s what we do in between that matters.

At well past the half century mark, it would be easy to consider that I’m way past my prime, and that my best years are behind me, but I’m just getting started. I do know that the Bible does NOT say “the greatest in the kingdom is he that sitteth through the longest sermons”, or “he that hath the largest bank account”, or even “he that is capable of kissing the most hind ends”, but it does say “the greatest in the kingdom shall be the servant of all”. Everyone has their own calling, and if yours is different than mine, that doesn’t make it wrong. All I know is that before Jesus ever attempted His first sermon, he had spent years feeding and tending to the baser needs of others; I think that sometimes we get that whole process a bit backwards from His example.

“I shall be telling this with a sigh
Somewhere ages and ages hence:
Two roads diverged in a wood, and I—
I took the one less traveled by,
And that has made all the difference.”