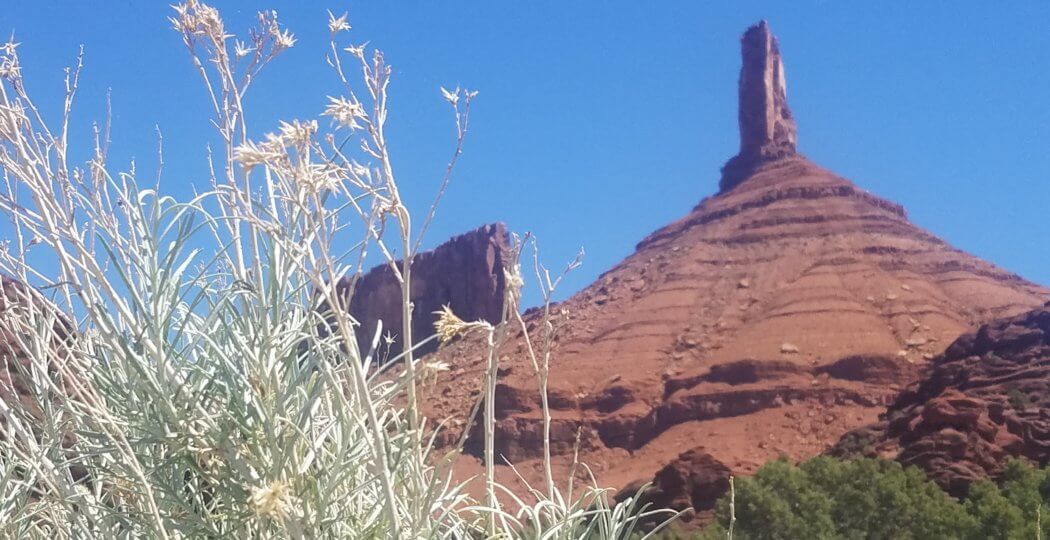 Dad has finally made it back home to the Casa, a fact that we inmates have milked to the Nth degree. I let the mom think that she ran things with a much firmer hand in his absence, but now that the little pushover is back, we have retaken command of the bed and she has retreated with her disciples Marco and Mia to lands unknown; it is rumoured that she has (gasp!) gone as far away as the Land of the Couch!

Dad and I have had an opportunity to talk a bit about the trip, and an eventful trip it was to say the least. But with any journey, adversity, and how and when to deal with it, are an essential part; adventure without adversity is just touring.

The second day of the journey found dad in his happiest of places, north and west of Taos along the Rio Grande. The funkiness and openness of the New Mexicans contrasts with the sometimes brutal landscape; this is when you you know that, regardless of which direction of the compass you are following that this is “way out west”.

Though not really physically hungry, Dad decided to stop in Tres Piedras to grab a bite; between you and I, I think he could go a week without eating out there, but don’t expect him to go fifteen minutes before attempting some human interaction.

So, like some sort of unholy combination of Tyrion Lanister and The High Plains Drifter, he waddled purposefully into the saloon, er, diner, on the edge of the dessert. After bellying up to the bar, he directed his steely gaze towards the menu only to discover the Holy Grail of snack foods:

He wasn’t even sure what “Pinon nuts” were, but it surely didn’t matter; the lure of the unknown combined with the siren call of the familiar made the decision an easy one, and he decided to make his play for the heavenly brown squares in the basket on the bar.

Not so fast there, pardner; there were some new desperados in town, a pair of posturing pistoleros from somewhere back east: Lycra Larry and the Spandex Kid. They had already eaten and were waiting to pay for their hardtack and jerky, so dad, (graciously, he thought) allowed them to proceed before placing his own order. This is when the Spray-tan Kid noticed the brownies in the basket and GRABBED BOTH OF THEM.

This would not do; the Low Plains Midget confronted the dastardly duo concerning their lack of dessert decorum, and the bar became silent as the combatants faced off in what would surely be spoken of in years to come as the Gunfight at the “Not OK With It” corral. Dad’s hand swept for his weapon, only to realize that:

He had left me at home; served him right, or in this case, he didn’t get served at all, as the rude nincompoops refused to relinquish even one brownie, and he had to hang his head and slouch sheepishly from the scene without the provisions that would have surely allowed him to survive the remainder of his trip across the dessert.

I know what you’re thinking; why didn’t he just snatch one of the brownies from her callused claws and make make a dash for the hills? Well, obviously, you haven’t seen dad lately; the only dashing he does these days is done from the back of a motorcycle. Dashing is not in his repertoire; waddling, maybe, sauntering, most definitely, sometimes even a short scamper is in order, but never dashing. He even has had to give up wearing cowboy boots due to his (lack of) stature:

The shanks kept rubbing calluses on his butt cheeks; now I defy you to shake THAT image from your mind without using peyote or prescription pharmaceuticals.

As he continued west, he began to dwell on the encounter with the carpetbaggers, to the point that it began to tear at his guts like a buzzard sitting on road kill. Then he realized that he ran the risk of ruining the rest of the day, and possibly the trip, if he continued to fixate on the bad instead of concentrating on the good and forging ahead.

But wait; why so quick to forget the “bad” experiences in the first place? Why not first embrace them, squeezing them ever tighter until every drop of hidden goodness is extracted from the pulpy mess? Only then could he really leave the bitterness in his rear view mirrors to decay and become just another pile of bleached brownies decorating the dessert landscape.

Let the buzzards continue to wheel and circle above the piles of offal you leave in your wake as you travel forward; we have miles to go before we sleep.

See you on the trail.