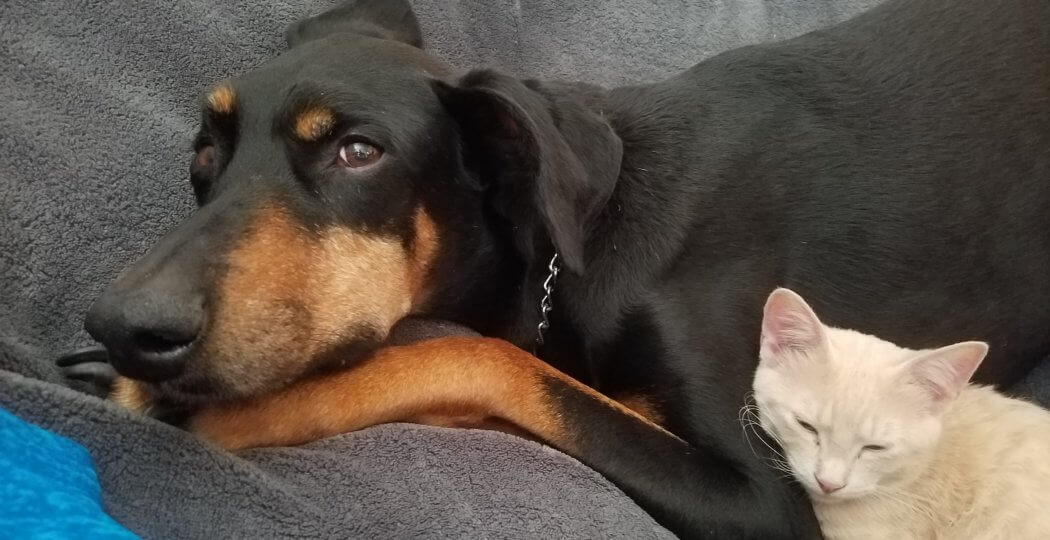 Dad here; in the midst of the book being released yesterday, we had to deal with the passing and burial of the oldest inmate of the Casa del Whackos, Alex’s large Doberman, St Echo the Perpetually Guilty.

Like many have done and will no doubt continue to do, Echo came to be a resident at the Casa as a result of “vini, vici, velcro”. Roughly translated from the original Latin, this means “I came, I saw, I stuck around”. Her previous owner was a dillweed of the highest order who happened to live just down the road, and we could see that she was wasting away. Mom and Alex would go down and put dog food out on the porch, and I confronted the gooberhammer many times; if we were going to keep feeding his dog, the least he could do is chip in for the cost of the Old Roy.

Alas, it never happened; may his armpits be infested with the fleas of a thousand camels.

Then he was transferred to another base, and Echo quickly put two and two together and figured out who was buttering the toast and where the butter was originating, and we soon had another galloping goofus take up residence at the Casa.

Whether it was from food anxiety or something physical, she always had a problem with yarking, always in huge amounts, without warning, and at the most inopportune times, even when unconscious at the vet’s office when she was getting speutered. Numerous vet consultations, diet changes, gizmos and tricks to slow down her intake, etc, etc, nothing seemed to do the trick. In her later years, the problem became much more critical, as even water became impossible to keep down her.

Now before anyone feels the need to chime in as to what we should or should not have done, be advised the Echo’s mom, Alex, is probably reading this, and after yesterday’s ordeal, is probably not going to be very tolerant of any Sunday morning quarterbacking, as you might expect. She’s a bit fiesty even under the best of circumstances, and I make no apologies as to what she might say; just sayin’…

Anyway, we buried the big girl in the northeast corner of the back forty of the Casa(actually two acres, but doesn’t have the same ring to it), in close proximity to Stevie, Angel, Bull Taco, and Max. As usual, the other dogs cavorted around continuously getting in the way, totally oblivious to the fact that we were at the point of dying of heatstroke under the sweltering Arkansas sun. Claire even took advantage of the digging, planting her goofy self IN the hole, were the earth was slightly cooler. The sight was a bit unsettling, to say the least.

But you have to laugh sometimes; the Claire Bear was so clingy towards Alex that it prompted her to say, “I think she realizes there’s an opening at my place”, which it actually appeared she did.

But this is how things always work out: when we attended Special Olympics this year, I saw one of the younger athletes clutching a small kitten wrapped up in a towel. I assumed it was a comfort animal of some type, and was shocked to later find Alex in possession with no intent to deliver. Why would my daughter steal a Downs child’s cat? Has she absolutely no shame or conscience?

As it turned out, the kitten was a stray that had been found behind a dumpster, and the kid’s family was looking for someone to deal with an issue that they were in no way prepared to handle. Alex named the little charmer “Scatty”, and he and Echo became inseparable buddies. Scat the Cat now goes everywhere with Alex, riding in his window seat like he’s the Tsar Nicholas himself; who’s to say that he was not put in Alex’s path to ease the sting of Echo’s passing?

For everything there is a season, and a reason; don’t miss your chance to make a difference in the life of another less fortunate…

The life you save may be your own;

Vaya con Dios, Echo, see you on the other side.