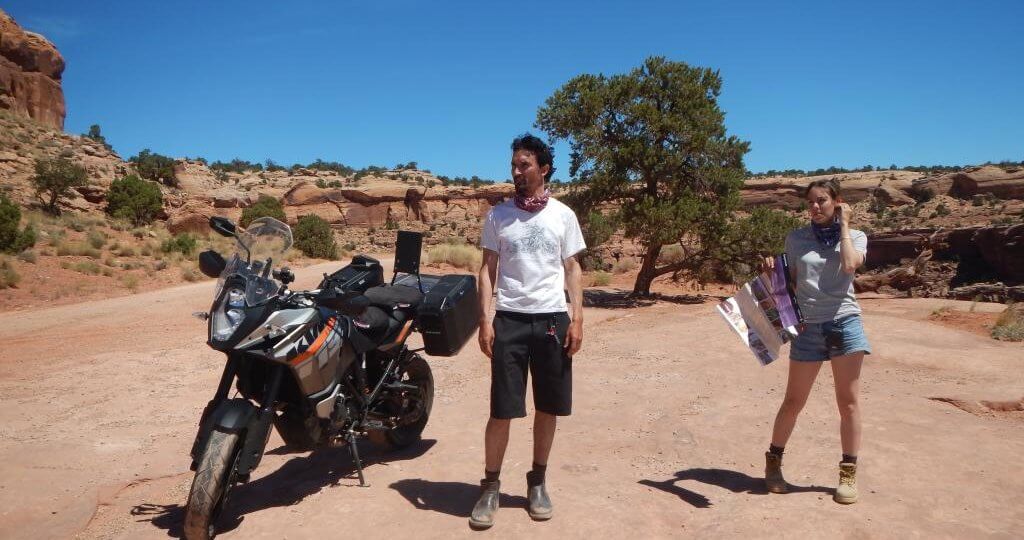 Dad here; Oba(mom’s mom from North Carolina, flew in last week for Kats graduation, and will be staying at the Casa for the next couple of weeks. As an 82 year old Okinawan and a pack of rowdy dogs don’t always coexist well, I have set up shop in Zach’s old room, with Zach’s old twin bed. The inmates see no reason to change sleeping companions, so I now am sharing my even more meager accommodations with four very inconsiderate dogs, but do you think they care and make special allowances?

They know who actually runs this here outfit!

I have two friends(who knew that I had friends, right?) that are circumnavigation the globe via motorcycle. They are currently somewhere in Mexico, and I am torn between admiration and bitter, gnawing, but wrenching, all-consuming jealousy when I read of their adventures. Zach and I first met this couple on a trip to Moab back in 2015, and the “chance” encounter was so incredible that I had to work it into Charlie’s first attempt at a book. Little did I know that they also had documented the meeting in his book, so I thought it would be interesting to compare the two accounts of the meeting.
The following is Charlie’s memory, then I will follow it up with a link to Tim’s… and awaaay we go, to Moab, Utah.

At the overlook before descending the Shafer Switchbacks, we met a a couple on a sparkling KTM 1190; a very suitable bike for these conditions, but the clothing these two were sporting was hardly appropriate for a trek into some of the most unforgiving terrain in the American southwest.

Enter Tim and Marissa; imagine Matthew McConaughey and a young Jane Seymour in the middle of desert, clad in merely shorts and t-shirts, with Tim wearing the cutest little side-zip Italian designer boots ever to have graced the runways at Milan. This dynamic duo had left Chicago a week earlier on a journey that had taken them west through Yellowstone, where Tim had proposed during a pouring rainstorm.

I’m sure you surmised that Marissa said “yes”, or I wouldn’t be including this in the narrative.

In a classic case of “don’t judge a book by its cover’, they proved to be very capable couple, their lack of protective gear due to the fact that they were camping in nearby Arches National Park and were just out for what they thought would be a short ride. Little did they realize that they were tackling some of the steepest terrain in the southwest; dad advised against it, but offered to let them hang with us for possible moral support, as a man and a dog in a sidecar aren’t going to provide much physical assistance in the canyons of Moab. After Marissa said “no mas” after the second switchback, Tim wisely turned his beast around and headed back up and out and back towards camp. As they passed, they yelled out the location of their campsite with an invite to visit them later that night, should we actually survive.

Looking back, I’m sure that they didn’t expect us to actually show up, but bring from Arkansas, we have different rules concerning just “dropping by”.

The ride that day was one of the highlights of dad’s life; as we bombed down through the canyons, time seemed to stand still. Dad’s account of a previous experience back in 2012 at this exact spot best describes the feeling:

“I haven’t felt 100% on dirt since acquiring knee troubles, and consequently surgery last year, to the point that I was ready to riding off road all together. The only reason i maintained the DR was because Zach would have killed me in my sleep if I had sold it, I just couldn’t shake myself from the dirt doldrums; this malaise continued to plague me on this trip as well…

Something clicked (psychiatrists describe a state of flow as when your task exactly matches your ability; if your ability exceeds your task, you have boredom, your task exceeds your ability you get anxiety, but there is a state if being where time stands still and, like a world class musician that plays licks that they didn’t even know that they were capable of, you find yourself performing well beyond your ability. Usually the feeling vanishes as soon as I realize I’m feeling it, but this was not one of those times. I’m sure I looked like an idiot, hair on fire and a silent scream in my throat, everything in perfect focus and happening in perfect zen-like rhythm, the most incredible feeling I have ever felt on a motorcycle since I first realized “hey, these things lean!” We blasted past numerous jeeps and ATVs until we encountered an off cambered slate shelf, the road went down and to the left, I foolishly decided I was bulletproof and went high and to the right, quickly found my self piled up under the bike in a cloud of dust and glory. Zach came up just in time to hear me howling, not in pain or anger at corkscrewing into the ground, but I was so pumped I wanted to get her off of the ground and proceed before I lost my mojo. What an experience, I’ll never forget it”.

We gimped back towards Moab to grab some grub and set up camp, then remembered Tim and Marissa’s invitation. A sunset ride through Arches is an indescribable experience, the setting sun illuminating the lunar landscape into a vivid red, with the snowcapped LaSal mountains in the distance providing the perfect backdrop to the panorama, so once again, we saddled up and headed north out of town. The remote campground where they were temporarily domiciled was aptly named the Devil’s Garden, so surreal yet picturesque that it remains booked months in advance. Upon arriving, I began to notice an abundance of men dressed in drab black suits and flat brimmed hats seemed to be wandering around out in the desert; a large group of Orthodox Jews were camped there as well.
As dad laughed at Tim’s outrageousness and Marissa pretended to be embarrassed, darkness fell over the arches and dunes and the chanting and singing of the Hassidics peculiar (to western ears anyway) minor keys began to fill the arid desert air. A proper picture of this scene cannot be properly painted, so I won’t even try, a classic case of “you just had to be there”.

After promising to ride to Chicago to crash their upcoming wedding, dad and I took our leave; the ride back through Arches under sliver of crescent moon as incredible as before; the ever present danger of suicidal mule deer leaping from the sagebrush into our path serving to add a little extra zing to an already spicy dish. We rolled back into town too late to hit a restaurant and too tired to cook, so once again, gas station cuisine was on the menu; hey, a girl’s gotta eat, right?

And here’s Tim’s accounting; give it a read and follow their adventures as they continue down into South America and beyond… we be of one blood, they and I.