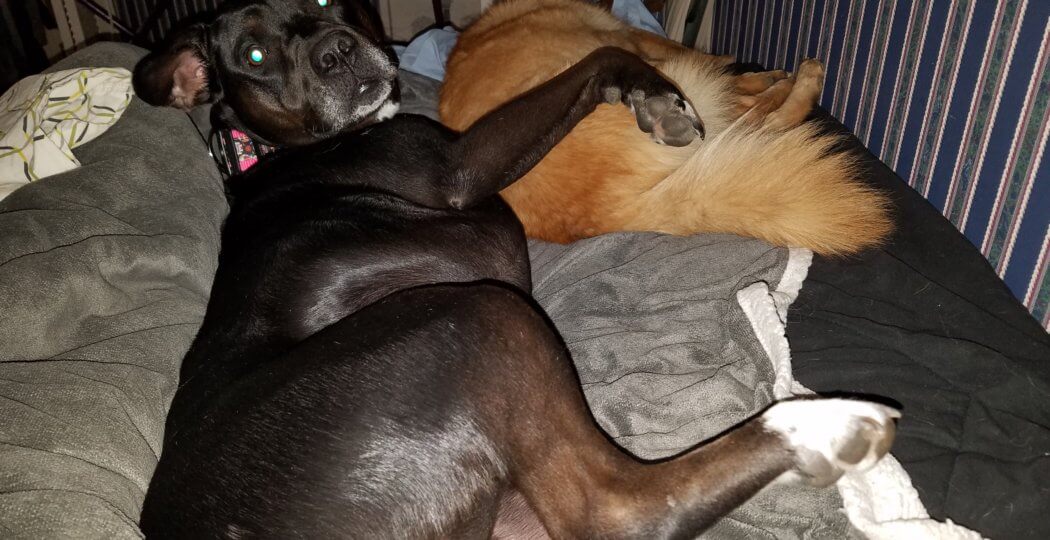 At the critical juncture where spine, legs, and tail meet, most dogs have “butts”; Ajax, Marco, Mia and I have DDU’s, pronounced “doodoos”, Dad Detection Units. These highly sensitive sensors are utilized to detect any motion in the land mass that is dad; we utilize them by pressing them firmly against the pater familius while we sleep to ensure that no egress from the bed is possible without our notification.

That is, all except Marco, who monitors any potential movement from his command center deep under the covers and between dad’s legs, emitting warning growls if there is the slightest hint of any seismic activity.

Of course, of no concern to us is the fact that dad has to sleep like King Tut, rigidly trapped in a sarcophagus of dog flesh instead of tightly wrapped linen, although the effect is the same. We find it very ungrateful on his part that we don’t require removal of his internal organs or of his brain through his nose as did the ancient Egyptians, although mom might say that while the loss of the guts could be beneficial, the loss of the brain would go unnoticed.

Wait a minute! Wasn’t Anubis, the Egyptian god of the underworld, a black dog? And wasn’t his chief responsibility the weighing of hearts in the balance to determine their worth before being allowed to enter the afterlife?
Hmmm, I’m starting to see a pattern here… I’m a black dog! I’m a great judge of character! Maybe I’m the reincarnation of Anubis and I didn’t even realize it! All this time I have been limiting myself to global conquest, when the underworld is also ripe for takeover? I shall delve into the ancient manuscripts and seek further enlightenment on this matter; I shall Google it.

(Dad here; there will be no more watching of “The Mummy” by Charlie before bedtime)