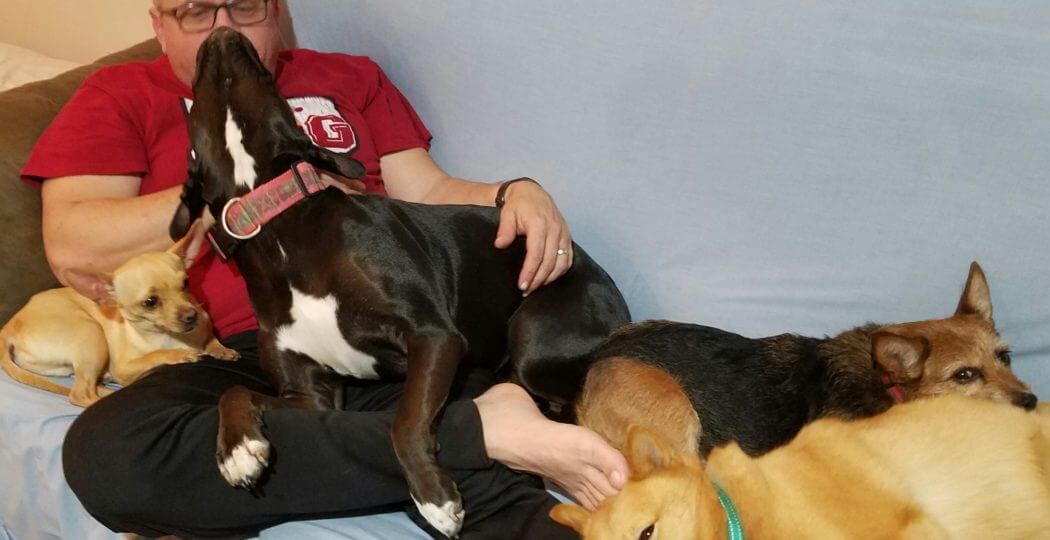 It’s a unseasonably warm February morning, which brings up memories of posting from the back porch of the Casa. A parade of dogs trots through my mind, not the least being Stevie, who loved nothing better that hanging out at my feet, lazily watching the hummingbirds through that janky eye, so I thought I would do a quick update on the current inmates.

Angel: Angel is an old girl, and the matriarch of the Casa; she loves to patrol the perimeter, sometimes barking at nothing, but she almost paid for this behavior with her life. Mom let her back in the other night from her nightly rounds only to find Angel bleeding profusely from her left shoulder, apparently a result of an encounter with the pack of feral dogs down the street. 300.00 later and enough stitches to make Frakenstien envious, she is now bumping around the Casa sporting the Cone of Shame. On a positive note, we can now receive programming on the TV never before possible with tin foil on the rabbit ears.

Echo: St Echo of Cardiogram spends the majority of her time at the Casa del Alex, but when she does come home, delights on bounding madly around the palatial estate in a failed attempt to find her own dignity.

Bultaco: Bull’s gimp is showing improvement, but he still plays the sympathy card for all it’s worth. He has developed a raspy cough that always seems to manifest itself when mom starts to put him outside, which I personally think is no coincidence. On the other paw, the micro dog is fearless; when the feral dogs wandered to close to the Casa during daytime hours, he charged them like a three-legged Don Quixote. The bullies tucked tail and fled, probably in shock at the prospect of being devoured by a tiny tan velociraptor.

Max: the Patron Saint for the Perpetually Worried is still engaging in daily warfare with Mia the Imp, recently featured in her high school yearbook as “Most Annoying with Absolutely No Respect for Personal Space”.

And Charlie? Well, after two years, The Charles reached a new milestone last night. She was engaging in her nightly obsession with compulsive face licking when mom dared me to play a little game of Russian Roulette by attempting to open and close my mouth before Charlie could take advantage of my stupidity. The first attempt was a resounding success for me, and I should have stopped the game there, but as has been noted before, I’m not the sharpest tool in the shed.

Have you ever seen those slow motion videos of a frog’s tongue flicking out three times the length of it’s own body to make a meal of an unsuspecting bug?

Well, after what I experienced, I consider the bug lucky. Before I could realize the depths of my own stupidity, Charlie had finished an extensive dental and tonsil examination, and was looking to extend her expertise into the fields of gastrointestinal and upper respiratory infection. Only my extensive training in the manly martial art of Tae Kwon Koughing and Sputtering saved me from total defilement.

And the hummingbirds? They’re laying low for the time being, but I am preparing for an all out assault of the voracious little ingrates this spring.

When dealing with the feathered Mongolian hordes, peace through superior firepower is my new strategy.