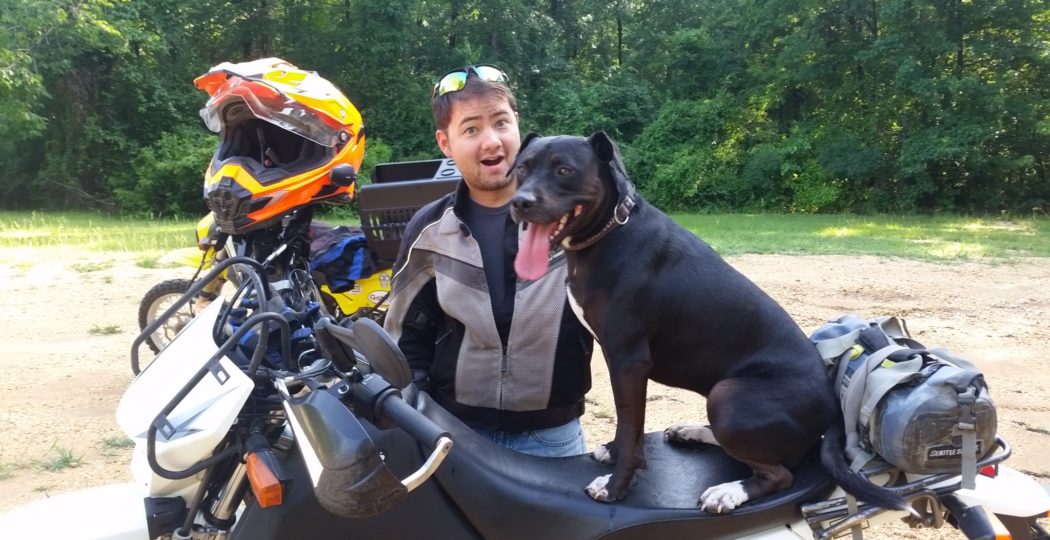 Yesterday, Zach began having some motorcycle issues up in the Ozarks, so dad and I hooked up the trailer and headed north. Zach is a resourceful guy, and by the time that we made it halfway to where he was camping, he had fixed the offending problem and and was loaded up and headed for home and Miss Tara when we encountered him on the interstate.

As we were already there with the trailer, it made no sense to just follow him in, so we loaded up his bike and continued on towards home. The morning was brisk, but the sun coming through the windshield was warm, and it felt like old times, just me, Zach and dad, no other dogs jockeying for position. I did what I do best, which is get my own way, and worked my nose under Zach’s arm and, like an inexorable flow of black lava, began my unstoppable progress between the seats and into his lap. Cody Jinks on the radio, the sun on my skin, Zach being forced once again to do my bidding, it just doesn’t get any better.

As we approached the exit towards home, dad swerved sharply to the right and the wrong, whipping the trailer across three lanes of interstate; had he lost his mind? Even I knew that this was a bad idea, as this route would take us directly by the new mall and it’s associated Christmas traffic, an area that he would usually avoid like the plague. Even Zach was perplexed; had dementia suddenly taken control of the old man?

Dad had seen a kitten in the middle lane of I-430, evidently hit by a car, but also had seen it move as another car whizzed over it, straddling the furry form with it’s wheels. Whether the movement was the wind from the passing traffic or a sign of life was impossible to tell, but one thing was obvious:

We were going back.

The problem was that in addition to the traffic from the mall, the next exit was some miles down the interstate, but we sliced and diced our way through the mess, the motorcycle in danger of breaking the straps tethering it to the trailer, until we worked our way back to the exit just before the spot where dad spotted the kitten.

And there it was, lying lifeless, still in the middle lane; too late. But as dad started to accelerate past, Zach saw the cat lift it’s head, so once again, dad cut off traffic and hit the left shoulder of the highway in a cloud of dust. Zach ran back to the kitten amidst a cacophony of blaring horns and screeching tires, but the wounded animal was in no mood for a gentle rescue. He had no choice but to whip off his shirt and throw it over the hissing kitten, scooping it up and sprinting for the truck.

In an episode eerily reminiscent of my first trip to the Casa, dad called mom and Zach called Tara to let them know what was heading their way. The kitten calmed down inside Zach’s shirt, and it looked like another story was beginning to take shape at the Casa del Whackos. Dad was already pondering potential names; Freeway? Lazarus?

Well, it didn’t matter, as when we got home and unwrapped the little bundle, the kitten had passed. When I mentioned to dad that I was considering telling this story today, he advised against it, as the purpose of this page is to concentrate on the good news. But while I am the eternal optimist, at the same time, I am no Pollyanna, and sometimes things just don’t have a storybook ending, but the stories need telling anyway. Would it have been better to let the kitten expire on the freeway alone, or to at least have the comfort of a warm lap in which to spend it’s last minutes?

While St Francis is the patron saint of animals, I think that that St Jude would be more appropriate as the patron saint of the Casa, as he was known as the champion of lost causes. Or maybe even Don Quixote, attacking windmills in an attempt to drive off imaginary giants. Sometimes its not the outcome yhat matters, but the effort.

Just because you can’t help them all doesn’t mean that you stop trying to help some, and in the end, it’s the “some” that make it all worthwhile.